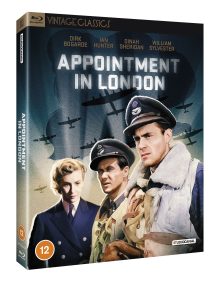 StudioCanal Vintage Classics have dug in their vaults yet again this month to bring us another classic British production that has been unfairly forgotten about in recent years. With Appointment in London, StudioCanal are offering us a film that feels very similar to their April release of the 1952 naval drama Gift Horse. Both films are set at the height of WW2 and both are equally interested in the lives of their characters off duty as well as capturing them in the height of action. By swapping out Gift Horse’s battleships for planes and bombers, how does Appointment in London stack up against StudioCanal’s more recent offerings?

Released in 1953, a full decade after the events it depicts, Appointment in London focuses on Wing Commander Tim Mason (Dirk Bogarde) a dashing and popular officer who has led almost 90 bombing raids over Germany. Considering that the average flight number before death for most bombing personnel is 30, it seems that Mason is either incredibly gifted or incredibly lucky…or maybe just a little bit of both. Refusing to stand down after flying 87 bombing runs, Mason promises that he’ll only stop when he reaches 90. Will Mason reach that number? And even if he does, will he survive? Set in 1943, and being made only eight years after the war ended, Appointment in London, not surprisingly, skirts around the controversy that still surrounds Bomber Command (their move from military to civilian targets later in the war, resulting in devastating bombing raids on German cities such as Dresden in 1944, that had no military purpose beyond shock, awe and the demoralisation of the German population, has certainly been questioned by prominent historians). Instead, the pilots depicted in the film only strike at military or industrial targets and actually go out of their way to avoid striking civilian centres.

Written by former officer John Wooldridge (who based the main character of Tim Mason on himself) Appointment in London is not concerned with politics but rather with the everyday lives and heroics of the Air Force. And make no mistake, these men were incredibly brave. The death rate in the Air Force was phenomenally high, with over 55,000 air men killed in bomber crews alone. The fact that these men were all volunteers is even more striking. Appointment in London, then, severs as a fitting tribute to these men and tries to depict, as realistically as possible, their lives both in the air and at the base. 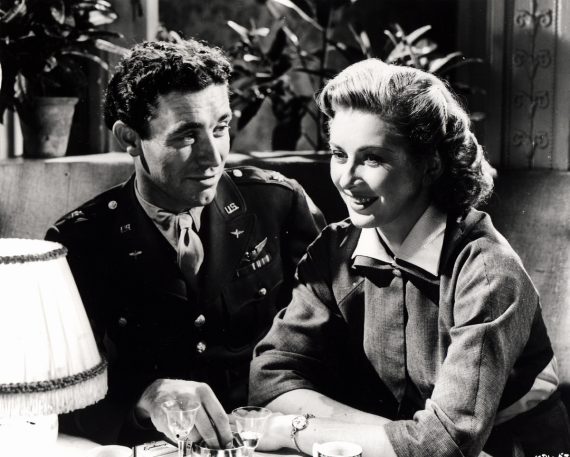 Director Philip Leacock had a background in documentaries and he brings this experience to bear in Appointment to London. This isn’t a film that concerned with delivering a riveting story or melodramatic plot. Rather, Appointment in London’s focus remains firmly fixed on the minutiae of airforce life. Briefings, downtime at base, pre-flight procedures and bombing raids all are depicted with a documentarian precision.

For WW2 aviation fans Appointment in London will no doubt be a joy to watch. Yet for those expecting more of a strong narrative may walk away slightly disappointed. Even the characters are rather thinly sketched. Bogarde does his best in combining authority with a sense of reckless charm, while there are decent turns from the likes of Bryan Forbes (who later became a screenwriter and director, responsible for films such as Raging Moon and The L-Shaped Room) and Dinah Sheridan, but the film is never really that interested in truly getting under their skin. 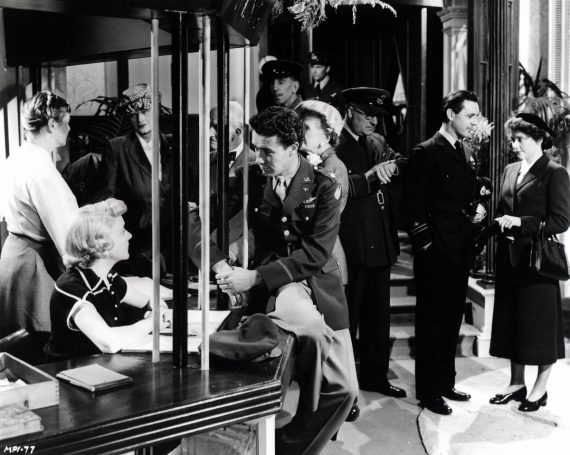 The pace leaves a lot to be desired as well. For the first fifty or so minutes, Appointment in London’s concern is the life of the bomber crews on the base, not the action in the skies (aside from one brief, tragic moment). This wouldn’t necessarily be a problem, yet the film finds itself drifting from scene to scene without much narrative tape to bind everything together.

The pace picks up in the final third. A accident during a take off sequence feels tense and gripping, while Leacock pulls out all the stops for a climatic bombing raid over Germany. Over twenty minutes long and combining real life footage with decent model work and aerial photography, the sequence is admittedly thrilling and is the only time when Appointment in London (forgive the pun) soars. 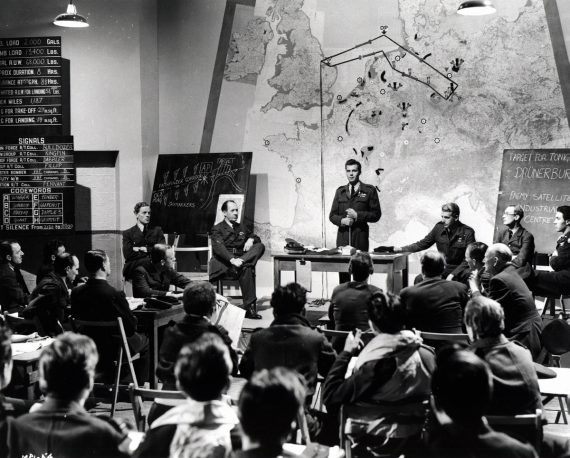 Devotees of WW2 and aviation history will, as mentioned, likely be thrilled by Appointment in London. It never feels less than utterly authentic in its depiction of bomber crews and the mundanity and small joys of life at base; and when it takes to the air, it morphs into a thrillingly dramatic spectacle. As a tribute to the bomber crews who fought in WW2, it certainly hits many of the right notes.

Yet I don’t know if that is enough to wholeheartedly recommend it. Lacking an engaging narrative or fully rounded characters, it feels like a film that focuses so much on the cold details, it has forgotten that sometimes cinema needs to have a little heart as well.

Appointment in London is being released on Blu Ray, DVD and digital on the 27th June. As ever with StudioCanal’s Vintage Classics range, the film has been lovingly restored and looks fantastic in motion. Sound is likewise clear and sharp.

There are two extras on the disc. The first is a roughly fifteen interview with Hugh Wooldridge (son of the film’s co-screenwriter and composer) who provides a history of his father’s career in the airforce as well as his life as a composer, before briefly going through Appointment in London, making notes about its accuracy and adherence to detail.

The second extra consists of another quarter of an hour interview, this time with historian Will Iredale, who provides lots of interesting historical context and analysis. Both extras are certainly worth a watch.