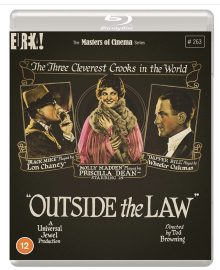 These days, Lon Chaney is most likely to be remembered for that scene in 1925’s The Phantom of the Opera, where the actor removes his mask to reveal a monstrous visage beneath. The scene still has the power to shock thanks, in part, to Chaney’s phenomenal and pioneering talent with make-up, which he self applied for each of his roles, repeatedly transforming himself in the process. Yet Chaney deserves to be remembered for more than just his spectacular transformations. Throughout the films he made during the 1920s, he proved that he was just as talented an actor as he was with brushes and paint.

Thanks to films such as Phantom and the tragically lost London After Midnight, Chaney is most frequently associated with helping to develop the horror genre during cinema’s formative decades, yet Chaney was just as vital in pioneering the visualisation and characterisation of the gangster as he was with spearheading the look and style of literary monsters.

It is this lesser known archetype which we see Chaney exploring in one of his two roles in Outside the Law, a silent crime melodrama from 1920, directed by horror maestro Tod Browning (of Dracula and Freaks fame). With both director and star working in a genre for which they are generally less well known, how does Outside the Law stack up against some of their more iconic work? 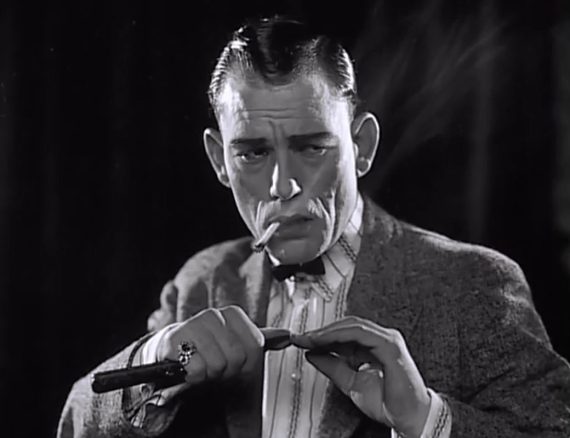 It is pertinent to note at this point that, while Chaney is the most famous name associated with the film, he actually doesn’t take a lead role in Outside the Law. Instead, the film is headlined by Priscilla Dean and and Wheeler Oakman, playing a criminal couple hoping to both evade the law as well as the ruthless criminal Black Mike Sylva.

After Molly Madden’s (Priscilla Dean) reformed criminal father is framed for murder, both she and safecracker Dapper Bill (Wheeler Oakman) stage a double cross of their own, betraying Black Mike Sylva (Lon Chaney) during a robbery of precious jewels. Afterwards, Molly and Bill find themselves holed up in a cheap apartment, waiting for the heat to die down. As time goes on, certain events begin to force them to re-think their criminal ways, yet will they be able to achieve redemption before the vicious Mike Sylva manages to catch up with them?

Despite Lon Chaney taking two smaller roles in Outside the Law, the film by no means suffers for it, thanks to the two great lead performances from Dean and Wheeler. Wheeler delivers a wonderfully naturalistic turn, happily playing second fiddle to the more commanding presence of Dean, who almost steals the show. Playing Molly with a backbone of steel and self determination that feels a world away from the weak, pejorative feminine archetypes that dominated not just silent film but majority of pre and post war cinematic output, Dean is a force to be reckoned with. I haven’t seen any of her other films, but this kind of tough yet glamorous anti hero was a role that she specialised in; it is a great shame that her work is not better known and better remembered, as her performance in Outside the Law certainly comes across as an almost revelatory breath of fresh air…for a film that is 102 years old, that feels more depressing than celebratory somehow. 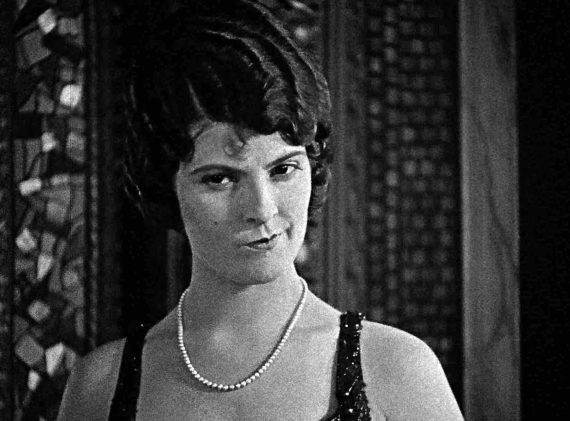 As mentioned, Chaney himself plays two roles in the film (a practice not uncommon for actors during the silent period). The smaller of the two, which sees Chaney don extensive make up to become Ah Wing, a Chinese man servant, is clearly problematic when viewed today. While this reflects the period (it was common for white actors to play Asian characters during this time) and Chaney’s performance doesn’t feel hateful or spiteful in the slightest, it may still evoke some discomfort in a modern viewer. 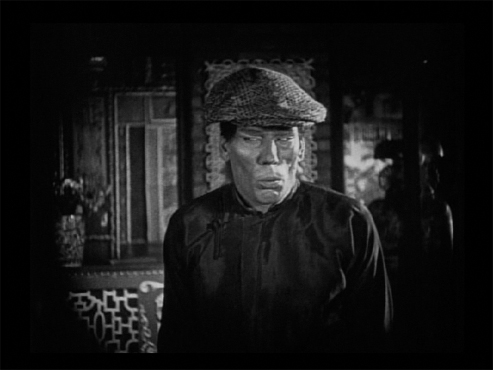 Regardless of one’s thoughts on the subject, however, there is no denying Chaney’s skill as an actor; even without the make-up, the difference between Ah Wing and gangster Mike Sylva is pronounced. It is in this latter role that Chaney makes the most impact. Shimmering with a threatening, sleazy presence, his performance as Sylva is magnificent – as Kim Newman notes in his interview on the disc, you can clearly see the influence here for the dozens of iconic screen gangsters to come, most notably in the work of James Cagney. The fact that Cagney himself played Chaney in a 50s biopic tells you all you need to know. 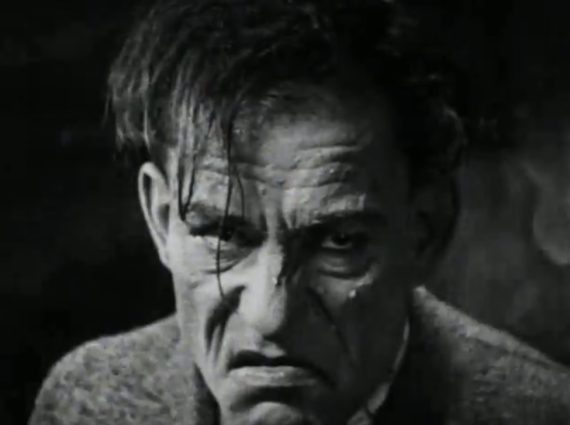 The shining lights in Outside the Law don’t merely belong to the performers however. Director Tod Browning makes almost as much impact off camera as those in front of it. While the director doesn’t employ the dexterous and free flowing camera work that marks so many silent films (his camera is instead almost always static) his editing and sense of pace are incredible for a film over 100 years old. Whether he is depicting complicated set pieces such as the jewellery robbery or something as simple as Molly gripping a pistol when a stranger knocks on her door, the fluidity of the visual language is as engaging and impactful as that seen in modern cinema, ensuring that Outside the Law should shut up any naysayers who claim that old films (especially those over 100 years old!) are slow and dull.

The tense, moody score  by Anton Sanko helps to reinforce this sense of modernity, feeling suitably dark and contemporary when scoring the film’s more dramatic beats, as well as avoiding the trap of over egging the film’s more sentimental moments. 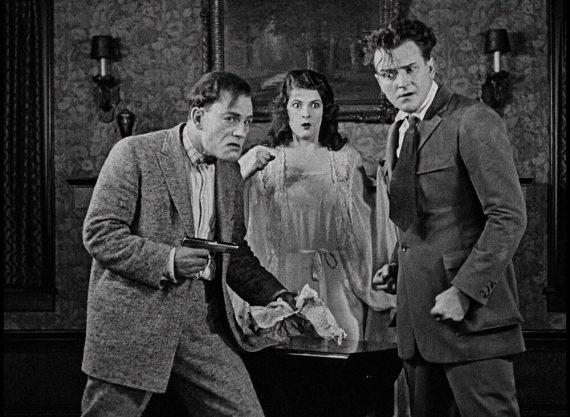 This doesn’t mean that Outside the Law is perfect. The heavy handed inclusion of Confucian philosophising doesn’t work that well (nor does the film’s rather simplistic depiction of morality) while a young character who appears halfway through may be too cloyingly sweet for some. You also feel that, due to the film’s age, some scenes feel rushed or incomplete, including the ending, which wraps everything up so quickly that some dramatic impact is lost.

Yet even these flaws don’t detect from what is a thoroughly enjoyable gangster melodrama. Infused with vicious, pre-Hays code violence (the climatic fight leaves certain characters very bruised and bloody!) and a brisk, engaging pace, Outside the Law should greatly appeal to fans of silent cinema and gangster films in general.

More than this however, it serves as a vital showcase for Lon Chaney, a hugely important actor whose work is not greatly represented by the UK Blu Ray market. Outside the Law goes some way in helping to correct this fault, revealing the actor at his dark, malleable best. I for one dearly hope that Eureka manage to bring more of his pioneering work to Blu Ray in the near future.

Outside the Law is being released on Blu Ray by Eureka on their Masters of Cinema label. The film has been newly restored in 4K by Universal Pictures and, for the first half of the film, the picture looks glorious, full of rich contrast and fine detail – it looks amazing and certainly belies the fact that the film is over 100 years old. However, as to be expected for film of this age, the materials used for the restoration must have varied greatly, as the latter half of the film exhibits some fairly significant print damage and fluctuations in picture quality. These moments do not last long, however, and should not detract from your overall enjoyment, especially when you consider that this is the very best Outside the Law will ever likely look.

There are two extras on the disc. The first is a 20 minute appreciation on Outside the Law by writer and critic Kim Newman. Newman, as engaging as ever, offers great contextual information for both Chaney and Browning, explaining how the film fits into their careers, as well as discussing Chaney’s lasting impact and influence – he also points out a brief ‘before they were famous’ cameo in the film by a iconic film star!

The other extra is an alternative ending for the film. This omits much of the violence and drama in the original and certainly doesn’t work as well – it is still interesting to watch at least once though.

Outside the Law will also come with one of Eureka’s booklets, which I didn’t get a chance to look at for this review.