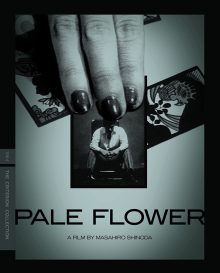 Masahiro Shinoda was one of the key figures of the Japanese New Wave, a movement of surprisingly largely studio-made films (the emergence of TV was forcing them to take risks) that challenged conventions of both filmmaking and society itself.

Shinoda’s first notable entry into the New Wave was 1964’s Pale Flower (a.k.a. Kawaita hana). With morally dubious protagonists and detailed depictions of gambling, Pale Flower didn’t go down well with the studio who funded it, Shochiku. They made largely wholesome fare at the time, so were unhappy with the film when it was finished. As such, Pale Flower was shelved for a while. When the studio finally decided to release it, the film was a big success though, helping Shinoda continue his career and become the respected figure in Japanese cinema he now is.

Criterion are adding Pale Flower to their illustrious Collection. With such a strong reputation and my taste for Japanese cinema, I got my hands on a copy and my thoughts follow.

Pale Flower is based on a novel by Shintarô Ishihara. It opens with Muraki (Ryô Ikebe) being released from prison and rejoining the Funada clan. He’d been doing time for the murder of a rival gang member and, soon after his release, discovers this gang have now merged with the Funada clan, to keep the peace.

Muraki is not happy with this new arrangement and seems only to be rejoining his Yakuza cohorts out of loyalty. He spends his evenings gambling, with little luck. At one of these sessions, his eye is drawn to a beautiful young woman playing alongside the usual motley crew of gangsters and lowlifes. Named Saeko (Mariko Kaga), the woman asks Muraki if he can introduce her to some higher stakes games as she’s growing tired of the usual crowd.

Muraki takes Saeko under her wing and the pair develop an unusual relationship that revolves not around sex or any other acts of physical passion, but around a desire for risk and danger.

This forms the film’s central concept. It’s about two characters who are lost, frozen in time whilst the world goes on about them. They can’t find their purpose among it all, finding solace in dangerous and self-destructive practises, particularly gambling, as well as fast-driving, drugs (in Saeko’s case at least) and later murder.

In an interview with Shinoda included on this disc, the director describes the situation in Japan when the film was made that likely points to what the film is alluding to. At the time, Japan was faced with choosing between US and Soviet political systems, but since it was occupied by the US at the time, it didn’t really have much of a choice. So Japan felt trapped during this period. The people felt their futures were being decided by others. The central characters seem to be experiencing a similar conflict and are turning to dubious thrills in order to escape it.

Pale Flower is deeply enigmatic though, for the most part. The ideas described above only became clear to me as the film approached its climax (though maybe I’m just a little slow). Saeko is particularly enigmatic and this mystery, alongside her striking beauty, make her a transfixing figure in the film.

Also drawing you into this offbeat gangster film, which largely eschews the usual themes of honour and revenge or tropes of thrilling violence, is its style. The film looks stunning, moodily lit in a noir-like fashion by regular Shinoda collaborator Masao Kosugi. Some unusual compositions are adopted too, making for a sumptuous visual experience.

Equally striking or perhaps even more so, is the film’s dissonant, avant-garde soundtrack. Tôru Takemitsu, who was a hugely influential figure in the New Wave and Japanese cinema in general, composed the score and was also involved in the sound design, coming on to the film at an early stage (often composers only start work once the film has been edited). This particularly shows in the gambling scenes with their repetitive, rhythmic sounds creating palpable tension. Funnily enough, the clatter of the thick cards being shuffled was made by a pair of tap dancers! In a striking change of pace though, the climactic murder is scored by a piece of classical music (by Purcell), giving the sequence a quasi-religious feel.

The performances are strong too, with dialogue stripped back a fair amount, leaving much to be said through glances, actions and reactions. For the male lead, Shinoda said he wanted to cast an actor who had been famous but now had fallen on hard times (he gives Mickey Rourke as a recent Western example). Ryô Ikebe had worked with Ozu and other great directors prior to this, but after getting pulled from a stage production due to his inability to remember his lines, he was little in demand before this brought the actor back into the spotlight.

Mariko Kaga, as mentioned before, is a bewitching presence. She had made her debut in Shinoda’s A Flame at the Pier a couple of years prior, but Pale Flower was her breakthrough role and led on to a long and successful career in film and television.

A stripped-back, super-stylish anti-gangster movie, Pale Flower is intoxicating cinema. Quite elusive for much of the time, it reveals its true colours as it goes on, telling a tale of two lost souls, brought together by a need to find something that makes them feel alive. It rightfully put Shinoda on the cinematic map and remains a remarkable experience to this day.

Pale Flower is out on 14th March on Blu-Ray in the UK, released by The Criterion Collection. It looks gorgeous, with rich textures and deep contrast without losing detail. It sounds great too.

The film comes with a couple of extra features. These include:

Peter Grilli’s selected-scene commentary (which runs for a little over half an hour) is unusual in that it focuses almost entirely on the film’s music and sound design. With Pale Flower having such an unusual soundtrack, created by such an important figure in Japanese cinema, it’s a welcome discussion though.

The interview with Shinoda is excellent too. The director provides some fascinating insight into the film’s intentions and production.

Overall, it’s a shame there isn’t more supplemental material, but what is here is of great value, so it’s still a decent package. With the film being exceptionally good too, it comes highly recommended.

* Please note, screengrabs are not used in this review (I didn’t get around to getting any). The images are from the Criterion website.