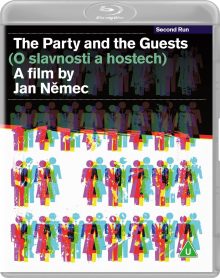 The film scholar Peter Hames claims Jan Nemec’s 1966 film The Party and the Guests (a.k.a. O slavnosti a hostech or A Report on the Party and Guests) is “considered the most subversive of all Czech New Wave films”.

The Czech authorities certainly felt strongly about the film, as it was shelved until 1968, when there was a relative liberalisation in the country, allowing it to have a limited release. A few years later, in 1973, The Party and the Guests was ‘banned forever’ though and kept off Czech screens until the Velvet Revolution in 1989. It didn’t have much luck in Cannes either, where it was entered into the 1968 competition. Nemec had high hopes for his film at the festival, but events in France caused it to be cut short before The Party and the Guests was screened.

Over time, the film’s reputation among Czech New Wave scholars and fans has grown though. I’m a relatively recent convert to the New Wave and as I’ve dug through the various titles available in the UK (largely released by Second Run) I’ve repeatedly come across The Party and the Guests, with the film frequently mentioned in the various commentaries, interviews and essays I’ve digested.

So, I was thrilled to hear Second Run are releasing the film on Blu-ray, with a healthily stacked set of extra features. I got my hands on a copy and my thoughts follow. 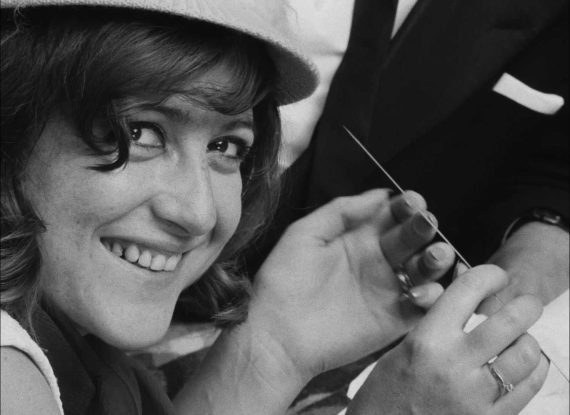 Based on a short story by Ester Krumbachová (an important figure in the New Wave, who had a hand in many of the movement’s best known films), The Party and the Guests has a simple but unusual narrative.

A group of friends are on an outing and we first see them indulging in fine food and drink whilst picnicking in the woods. As they head off from the spot, however, they are approached by a group of men, led by Rudolph (Jan Klusák). This quietly forceful bunch herd the friends up and take them to a clearing.

There the friends are made to answer questions and follow strange instructions, being kept inside an imaginary pen, marked out by lines in the dirt and stones that represent a gate. Most of the group do as they’re told but one, Karel (Karel Mares), refuses and is accosted by Rudolph and his men.

The tension in the clearing is quelled though by the appearance of the ‘host’ (Ivan Vyskocil) of a party, of which Rudolph and co are involved. The host is much more cordial to the group, though he’s still a commanding presence, who subtly orders the friends to join his party. 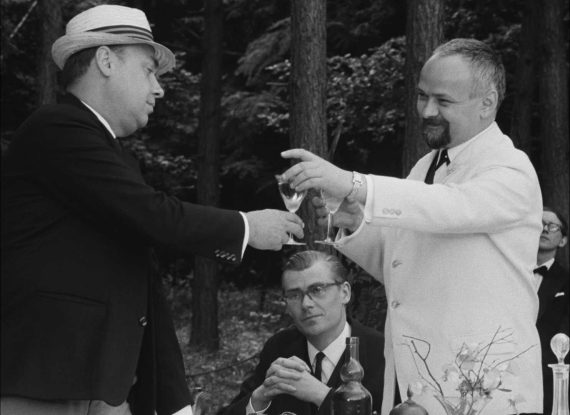 There, the group join other partygoers, who all soon kowtow to this mysterious gentleman and his rigidly organised ways. However, one of the party (Evald Schorm) quietly disappears, which not only troubles his wife (Jana Prachařová), whom he leaves behind, but aggravates Rudolph and the host. The group mull this over and come to a decision about what to do about the man.

Nothing is clear in the film but it demands interpretation from the audience and it’s not difficult to see why the authorities had a problem with it. The film is widely interpreted as a comment on Czech under Communist rule. Nemec denies this, calling it a fable and stating the ‘mob’ could symbolise any controlling group. I wouldn’t argue with that, as the film can easily be seen as a metaphor for any number of authoritarian governments or organisations, though it’s hard to believe the Communist rule in Nemec and co-writer Krumbachová’s country didn’t strongly influence the concept.

Krumbachová (who was married to Nemec at the time) claims the idea for her story came from her “moral indignation at people who are the embodiment of indifference, who go through everything and accommodate themselves to everything”. The film shows how most of the general public just fall in line, with only minimal pushback, no matter what forces are trying to control them. It’s as relevant as ever in this sense and suggests Krumbachová and Nemec’s claims that the film is not aimed at the Czech regime may well be true. 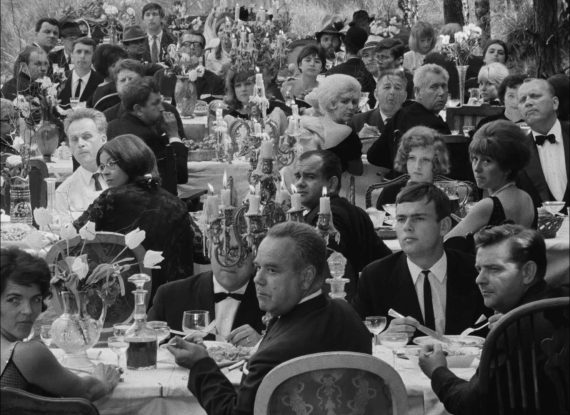 The enemy is not necessarily the host (clearly standing in for some sort of regime), but rather the group of friends for being totally complicit in their actions. They initially react in different ways though, covering various public responses to such movements. One quickly nuzzles up to the new host, one seems to have a pre-existing, secretive relationship with him, others complain but soon go along with it, even if reluctantly. The one dissident, our supposed ‘hero’, is one of the few characters that says and does next to nothing on camera. He just silently disappears.

The dialogue is famously cryptic. Some of the commentators (and reportedly screenwriter Krumbachová herself) suggest you shouldn’t spend too much time trying to ‘understand’ it though. It is likely just a comment on empty small talk, so is purposely nonsense. There are some clearly loaded lines though, that point towards the film’s damning of the Czech authorities.

The cast is largely made up not of actors but Czech artists and filmmakers, picking those whose personalities or public personas link somehow with those of the characters. They’re all largely anti-establishment figures though and the guest that disappears was a filmmaker who’d had his own work banned by the authorities. 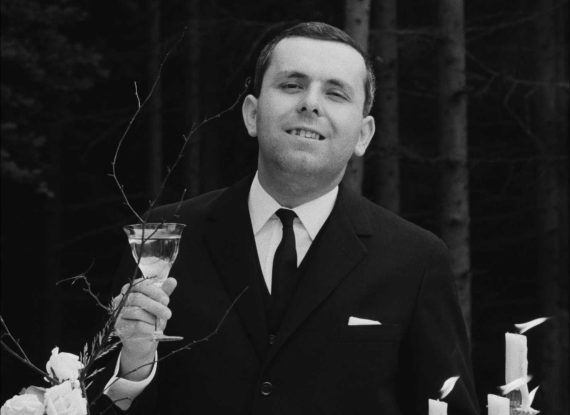 Jan Klusák is the stand out in the cast. In reality, he was a composer, but here he delivers a wonderfully bizarre turn as the softly spoken, childish figure who maintains a frightening power over people. Jonathan Owen perfectly describes Klusák’s superb performance as a bizarre cross between Jerry Lewis and Peter Lorre, blending offbeat humour with genuine menace.

It’s a film that’s fairly easy to watch with such hints of black comedy, on top of a brief running time and attractive, if unshowy cinematography, but its cryptic nature leaves you a little bewildered as it goes on. Much is gained over time though as you let the incidents on screen soak in, as well as after rummaging through the large volume of supplemental material on this disc.

Stylistically it’s very different to Diamonds of the Night, the only other Nemec film I’ve seen (and was hugely impressed with, as my review will attest). Whereas that combined visceral imagery and sound with regular, unheralded jumps to fantasy, The Party and the Guests, whilst tackling a surreal script, plays things very straight. Shots are carefully composed and largely static whereas in Diamonds of the Night handheld cameras are largely used to throw us into the world of the chased-down protagonists. This shows how Nemec knew how to use cinematic technique to tell his stories in the most effective fashion. 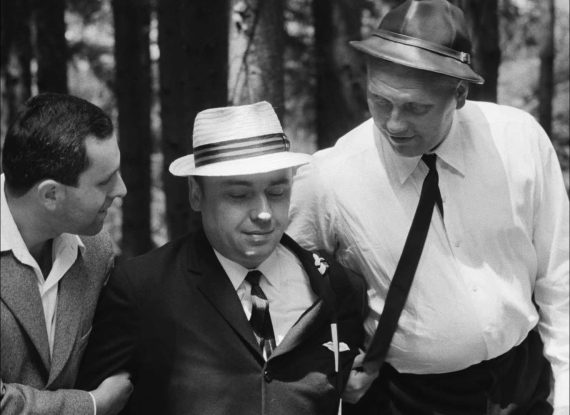 Overall, The Party and the Guests is a film that requires some further research and unpacking to fully appreciate, but the core satire is clear and even if some details might go over your head (or aren’t supposed to ‘mean’ anything), it’s too short, entertaining and quietly tense to ever allow you to lose interest. Another gem from the Czech New Wave then and further fuel to my growing belief that it’s the strongest movement in cinema history.

The Party and the Guests is out on January 31st on region-free Blu-ray, released by Second Run (their previous DVD release is still available too). The picture quality is first-rate, presenting a detailed image with a pleasingly natural grain. I’ve used screengrabs throughout this review to give you an idea of what it looks like. The audio is flawless too.

Jonathan Owen’s solo commentary is excellent, providing a deep analysis of the film, as well as background on those involved.

The Projection Booth track is also required listening. There’s some crossover, but both commentaries are still very strong and contain their own perspectives and qualities.

Hames’ piece is fantastic too, cramming a decent amount of background and analysis into a relatively brief 12 and a half minutes.

Jiří Trnka’s short animated film The Hand is also a fitting and welcome addition to the set. Following the story of a man harassed in his own home by a hand that tries to force him into making model hands and centre everything he does around hands, the film is another anti-totalitarian fable. Wonderfully animated, efficiently told and subtly terrifying, it’s an excellent film in its own right.

The booklet is a valuable resource too, adding further thoughts on the film as well as providing a fairly detailed look at Nemec’s career in full.

So, as usual, Second Run have done a fine job with a fine film. Like most of their discs, this comes easily recommended.