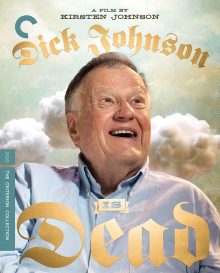 Since the turn of the 21st Century, Kirsten Johnson has been enjoying a career as a respected documentary cameraperson/cinematographer, working with luminaries such as Laura Poitras and Michael Moore. She’d also directed a few of her own films and TV documentaries throughout this time but it wasn’t until releasing Cameraperson in 2016 that she became known as a director. The somewhat autobiographical film, which consisted of a collection of footage she’d shot for various projects and personal reasons over the years, was a hit with critics and festivals, winning a host of awards.

Spurred on by this and reportedly inspired by an edit made in Cameraperson, Johnson followed the film up with another deeply personal documentary, Dick Johnson is Dead. Produced by Netflix, it also received widespread acclaim and won several awards (though, like Cameraperson, it was surprisingly absent from the Oscars nominations for best documentary). Now Criterion have added it to their collection and I thought I’d give it a look.

The Dick Johnson of the title is Kirsten’s father. When learning that he had dementia, from which her mother had already died a few years prior, Kirsten decided she didn’t want to lose her father in the same way. She had the idea of making a documentary celebrating the life of her beloved parent whilst repeatedly portraying imagined ways he might accidentally die. She saw the film as a way of visualising and coming to terms with something she never wanted to see, her father dying. 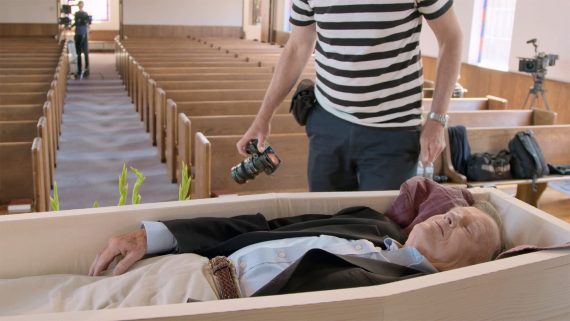 The film blends these ‘death scenes’ with vérité footage of her father over the years spent making the film and other discussions with people involved in the process, as well as some friends and family members. Also intercut with this material are imagined visions of heaven and hell.

One thing that struck me very early on in Dick Johnson is Dead was how refreshingly frank it was about the subject of death. People are always dying in films but it’s often dramatically milked for tears or thrills (in the case of action and horror films). It’s rare that the subject is tackled head-on with such honesty, sensitivity and good humour.

Indeed, whilst the subject matter suggests a brutally depressing experience that follows a parent’s descent into the abyss of dementia, it’s a surprisingly funny and warm film. This is partly because the development of Dick’s illness is relatively subtle and we never see him wholly incapacitated or completely ‘out of mind’. Kirsten didn’t want to make a gruelling, painfully sad film. She wanted to make something humorous that would be a testament to how amazing her father was/is. 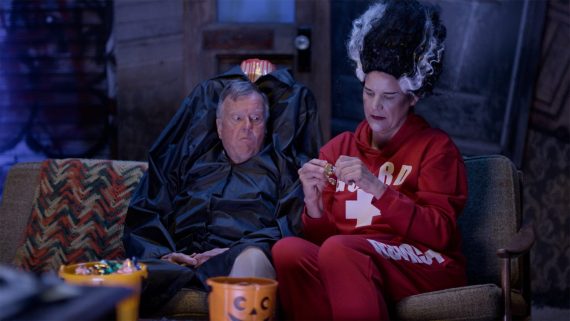 And indeed Dick does come across as a wonderful person. Full of good humour himself and a great love of his daughter, he’s always happy to go along with her wild ideas, even if he’s not always comfortable with them.

Kirsten was thankfully sensitive to this though. Originally she planned to have her father killed at the end of every scene. After realising how difficult that would be for her dad as his dementia developed, they gave up on that idea, though they managed to make use of a handful of test shoots they did. This also meant they were able to include footage of the crew involved in these sequences, which adds another layer to it all.

Losing the death scenes caused Kirsten and her team to rethink. They were worried there would be gaps in their concept, but then they had the idea to use the funding and crew set aside for the ‘fictional’ aspects to make the heaven and hell sequences and other fantastical ‘reconstructions’.

These are gloriously over the top and campy, using extreme slow motion to show Dick indulging in some of his favourite food and mingling with beloved dead celebrities among the clouds in a bright and colourful setting. Most joyous is a sequence where Dick dances with someone wearing an oversized mask of his dead wife. His dancing is done by someone wearing a mask of his face, but we do get to see Dick’s reaction to this scene, which is simply beautiful. 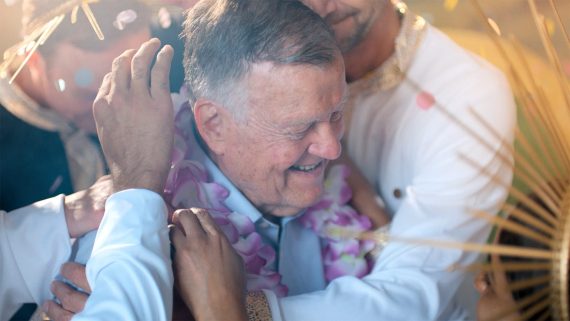 It’s not all fun and games though. We do see Dick gradually become more confused and reliant on the support of his daughter. One early heartbreaking scene sees the pair discuss the fact that Kirsten is having to go through the horrific situation of slowly losing her mother all over again. Another moving sequence has Dick describe himself as now being like Kirsten’s “little brother”, tagging along behind her rather than supporting or leading her as a father.

There’s a philosophical side to the film too, but never in a chin-stroking, debating amongst the intelligentsia kind of way. Instead, we hear the thoughts and memories of losing someone from various people that enter the film and meet Dick. The Johnson family were Seventh-Day Adventists and this is brought up on several occasions, leading to some discussion of religion, though it doesn’t openly delve too heavily into this. The importance of accepting death as an inevitability and part of life comes up too, as well as effectively laughing in the face of death.

Overall then, Dick Johnson is Dead is a refreshingly original, deeply moving yet warm and enjoyable documentary that boldly tackles a difficult subject but does so with great joy, humanity and love. It’s a beautiful ode to a loving father that will speak to most of us, even if it’s an intensely personal project on the surface. 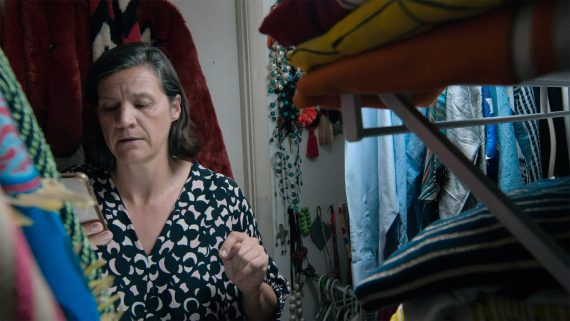 Dick Johnson is Dead is out on 21st February on Blu-Ray and DVD in the UK, released by The Criterion Collection. The picture quality is excellent, with the material shot on higher-grade cameras looking pin-sharp and nicely coloured. Obviously, some of the older footage and bits captured on mobile phones and such don’t look as remarkable but it seems to be as well-translated to disc as possible. Audio is rich and clear too.

It comes with a handful of extra features. These include:

The commentary is wonderful, adding a whole extra layer to the film, with the trio digging into the ideas behind it as well as discussing the process of making it.

In the producers’ round table discussion, the group of women talk about how challenging the film was to make due to it being like nothing they (or anyone else) had made. They also describe how the project was reshaped as it went along. It’s a fascinating video about the production process of this unique film.

There’s also a compiled piece, taking samples from various Zoom interviews Johnson and editor Nels Bangerter gave, conducted by various famous documentarians and filmmakers. This is an illuminating and enjoyable featurette, despite the promotional background of the clips, though it can be a little backslap heavy.

The Pete Horner piece is a welcome inclusion too. It shows the great attention paid to the sound of the film, something that wouldn’t stand out on a standard viewing. People assume documentary audio is just basic material captured ‘as is’ but a lot goes on behind the scenes with the sound design.

So, Criterion once again deliver a thoughtfully collated package for a wonderful film.