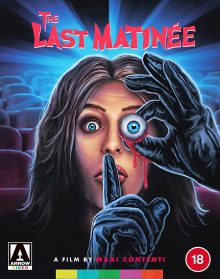 Set in Montevideo during 1995, The Last Matinee is part ‘slasher’, part giallo and with regards both sides of this crimson coin it does very well. Borrowing liberally from some of the greats of both these sub-genres Contenti’s Matinee sparkles with its own added sheen on well-worn tropes and delivers on horror fan’s expectations.

As the family crowds depart the Opera cinema from a matinee performance earlier, and night quickly descends on the picture house, we’re introduced to the next audience, attending the theatre to watch a horror film (actually one of the main actor’s own films, namely Frankenstein: Day of the Beast; a gothic slasher, of sorts). There’s a mismatched young couple; a young trio; a grumpy old man; a sleeping old man; an attractive young lady who’s been stood up by her date and a boy of about nine years of age who’s snuck back in after the previous film has finished.

We’re also introduced to the cinema staff, these being the aging projectionist, who’s rapidly sent home early by his daughter who comes in to take over projection duties; the rather creepy usher and the box-office lady, who also heads home before any real carnage takes off. 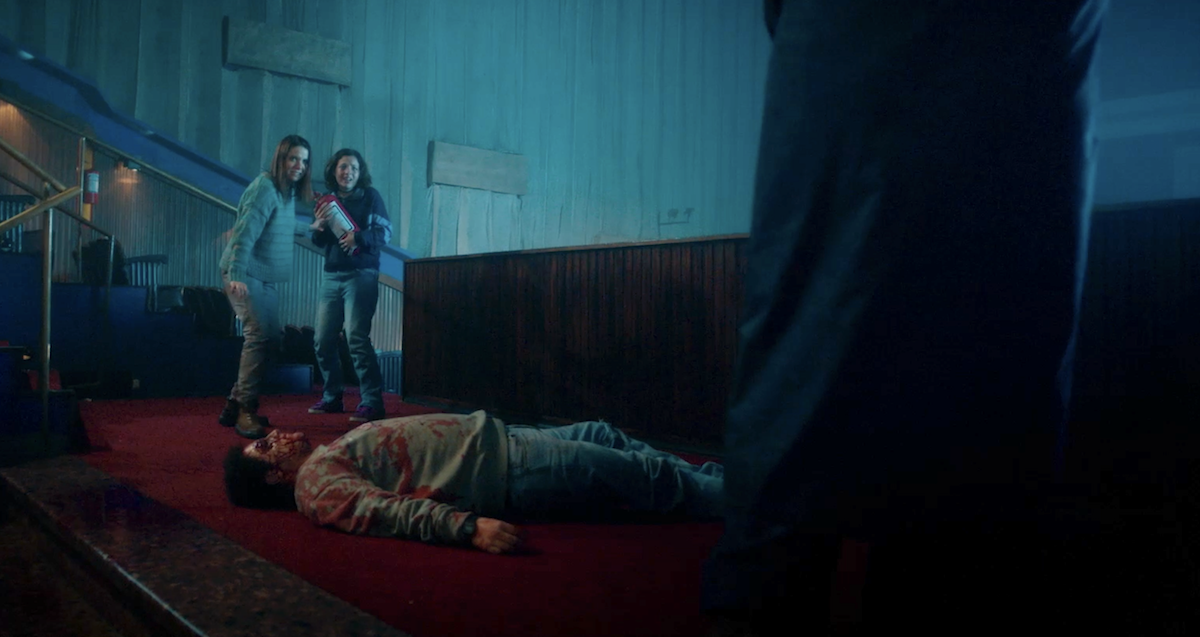 Our first encounter with the killer has us see him pull up in his car and then take something that looks like a pickle out of a jar and eat it, as he watches the rain lashing down around him. We later realise that these are ‘special pickles’ and play quite a significant role in his monstrous modus operandi.

It’s not long before our disturbed pickle-eater is doing his best to reduce the population of the cinema to one; namely himself. Firstly, he offs the sleepy old man, just as a murder is being committed on screen, hence distracting the other punters. Then he slashes the usher’s throat in one of the best conceived throat slashing kills for ages – I particularly enjoyed seeing the victim’s cigarette smoke escaping the victim, out through the wrong hole! From then on the killer locks them all in and the scene is set for a whole bunch of stylish slashing, courtesy of various knives, and a metal rod used to close the steel shutter cinema door.

The projectionist’s daughter turns out to be a suitable foil for our friendly neighbourhood black-gloved loon, as she does her best to save herself and the young boy from a fate worse than death. 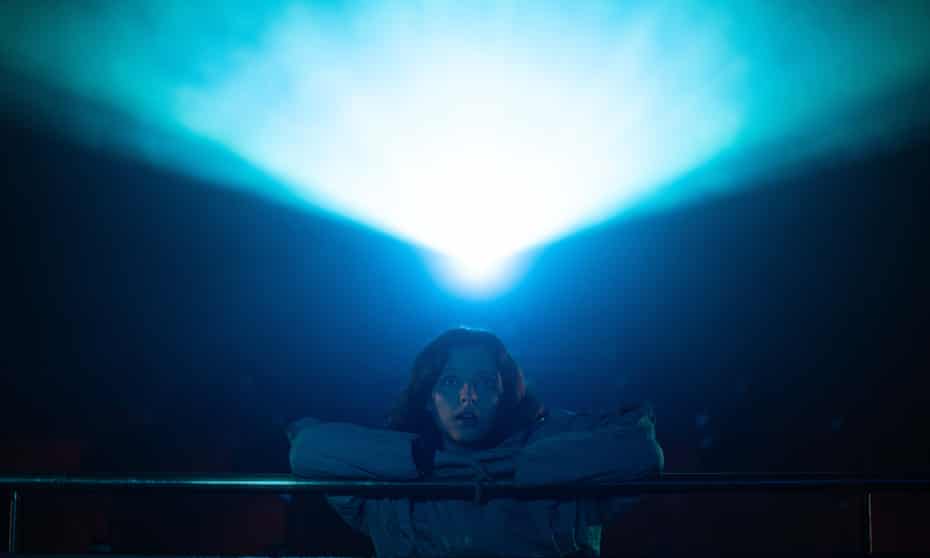 Maxi Contenti is obviously well-versed in the horror genre, particularly in giallo and slasher films and, while the film is nothing particularly original, it still trumps many more recently produced wannabe giallos. It has believable and, in some cases, likeable characters, a fairly original and menacing bad guy; a good location, a great soundtrack by Hernan González, and some striking cinephotography by Benjamin Silva. Plus, it has some great old school, in-camera grisly VFX for the murder gags, which this horror fan really appreciated (I’m getting tired of run-of-the-mill CGI gore effects).

While The Last Matinee is never going to win any prizes for originality, it certainly does what it does really well and in a very entertaining and professional manner, and that’s more than can be said about so many independent horror films these days. In the extras the director talks about a possible follow-up to Matinee, which I, for one, would welcome with open arms and a dangling bloody eyeball… 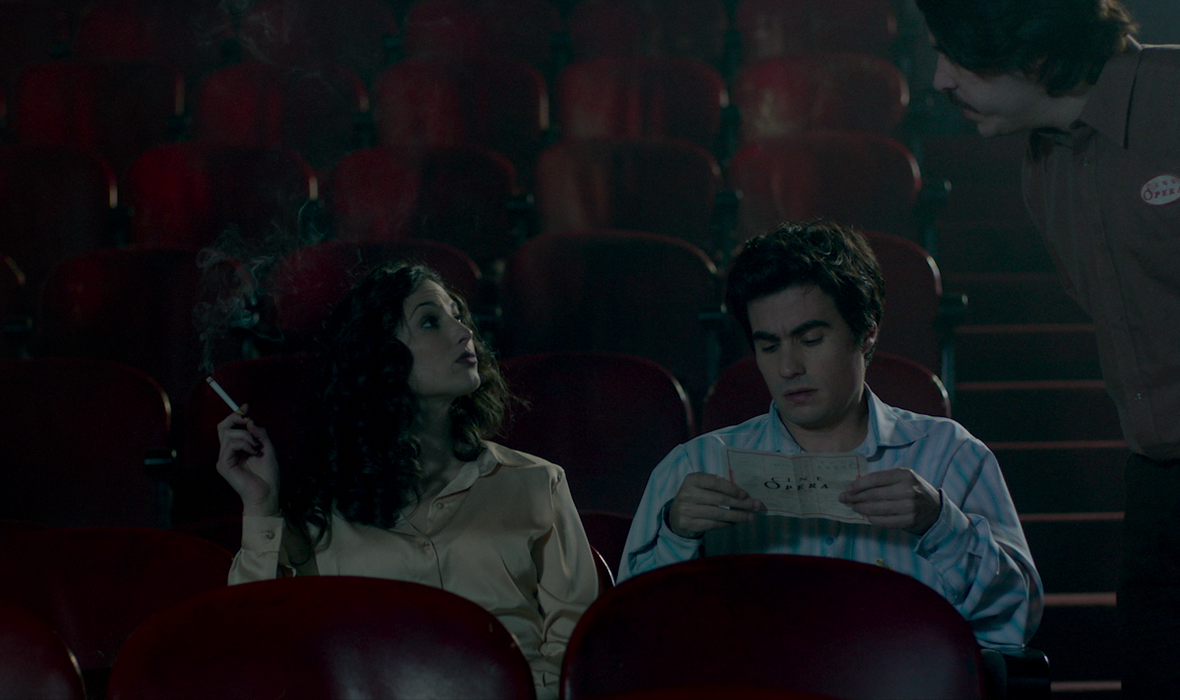 The Last Matinee is being distributed by Arrow Films on Blu-ray. There are plenty of extras on the disc including:

Behind the scenes (11.5 mins) – We get lots of interesting anecdotes about the production from the various people involved, including the director, the DoP, the costumer, the VFX lead, and a couple of the actors.

Interview with director Maxi Contenti (14.5 mins) – Maxi talks about his experiences of working in the horror scene in his home country of Uruguay, and also about his inspirations. For example, he decided he wanted to work in movies after watching Jurassic Park, apparently.

Killer attractions: Maxi Contenti and Ricardo Islas in conversation (50 mins) – Ricardo was Uruguay’s first horror film-maker and is also the villain in The Last Matinee. His own feature film, Frankenstein: Day of the Beast also screens in the cinema scenes during the course of the Matinee movie. This is quite an interesting discussion between the two directors, although suffers a little bit from being done over Zoom so doesn’t flow particularly well.

At the premiere (1 min) – shots of people attending the screening, all wearing Covid masks!

The Matinee Massacre – A three-part mockumentary that pretends the events at the Opera cinema were for real (14 mins);

Puppet Pal V (90 mins) – The director’s previous feature film in its entirety; it even has its own make-shift 18 certificate at the beginning!

Short films, including The Plastic Kingdom (24.5 mins), which is an ironic look at plastic waste; Popping Eyes (3 mins) – a B & W short with lots of reversed footage; Hobby Metal (11.5 mins), which sees a guy using a metal detector finding a body due to its fillings; Les Escaliers Frutiers (1.5 mins) – shots of fruit rolling down some stairs (obviously a precursor to similar shots with marbles and eyeballs in Matinee); and La Galleta (The Cookie) (4 mins), which sees a naughty Beagle dog eating some cookies. And, finally, Miedo (19 mins), which the director made when he was only 18 years old!

Trailers – Theatrical (2 mins) – makes the usher seem like the main suspect; plus three teaser trailers, one which calls the film ‘Red Screening’.

Galleries – 50 behind-the-scenes shots; 8 concept art images for posters; 134 storyboards; 48 promo stills; 44 posters (my favourite is the one with eyeballs in the popcorn maker machine) and 50 fan art, although this seemed the same as the behind the scenes set.