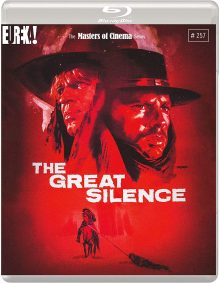 Made at the peak of the spaghetti western boom, just before it began to swiftly fall out of favour, The Great Silence (a.k.a. Il grande silenzio) is thought of as one of the greats of the sub-genre. The director, film scholar and spaghetti western aficionado Alex Cox believes it’s one of the best westerns in general and it inspired a number of films that followed. Even just a few years ago, Quentin Tarantino ‘borrowed’ a number of elements of The Great Silence for his second western, The Hateful Eight.

Funnily enough though, The Great Silence wasn’t initially released in the US or UK. Reasons for this vary, but Mike Siegel’s account provided on his commentary on Eureka’s forthcoming Blu-ray of the film seems the most believable. He claims 20th Century Fox producer Darryl Zanuck, who was due to distribute the film in said territories, was angry at the nihilistic ending of the film and the terrible alternative ending shot to please him (included here) wasn’t much better, so he boycotted the release entirely.

The Great Silence eventually saw the light of day in the US and UK, with the premiere in the latter being on the Cox-presented Moviedrome series on BBC 2. It’s still never had much of a showing on home video here though, other than a DVD released in 2004 that I must admit I wasn’t aware of until now. As such, I’ve never seen this reported masterpiece, despite claiming to be a fan of spaghetti westerns. Needless to say, I was thrilled to hear Eureka would be giving it the spit and polish treatment on Blu-ray, so I eagerly snapped up a copy and my thoughts can be found below. 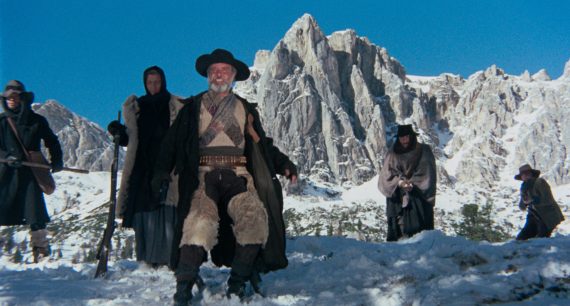 The film is set in Snow Hill, Utah in 1898 during a great blizzard, which coats the mountainous region in deep snow. The area is home to a standoff between a group of outlaws and the bounty hunters out to earn a profit on their heads.

The bounties on the supposed criminals’ heads are largely believed to be unjust and an amnesty is on its way to clear their names, as the West becomes more ‘civilised’. Whilst the bounty hunters rush to earn and claim their rewards before the act becomes illegal, Gideon Burnett (Frank Wolff) is assigned to keep the peace as the town’s new sheriff. Doing more than this bumbling figurehead to stop the bounty hunters though is ‘Silence’ (Jean-Louis Trintignant), a mute gunfighter with a personal bone to pick against them.

When the notorious bounty hunter Tigrero (or Loco in the English dub, played by Klaus Kinski) kills the outlaw James Middleton, the victim’s wife Pauline (Vonetta McGee) hires Silence to get revenge for her. The mute agrees to take on the job but Tigrero is sharper witted than most and knows his way around Silence’s honourable methods of only killing in self-defence. 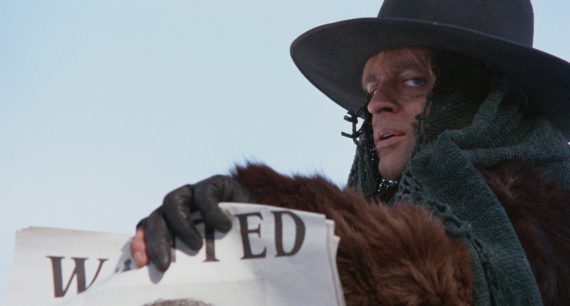 During the first 15 or 20 minutes of the film, I thought The Great Silence had quite a complex narrative with numerous characters and plots but everything diverges after a short while and the film’s focus becomes fairly narrow and sharp.

That’s not to say the film is simplistic though. It carries weight in its deeply pessimistic theme. Writer/director Sergio Corbucci wanted to show that behind the supposedly respectable, fair, law-driven society of the western world lies a violent foundation, driven by exploitation. The film shows laws can be as cruel as any violence on screen. Kinski and his bounty-hunting friends are acting by the book, whilst our hero is actually the one breaking the law.

* POSSIBLE SPOILER * This particularly hits home in the film’s finale, which offers up quite possibly the bleakest and most downbeat ending in the history of cinema. I can see why Darryl Zanuck wasn’t happy about it, though it perfectly fits the tone and overall message of the film. * END OF SPOILER * 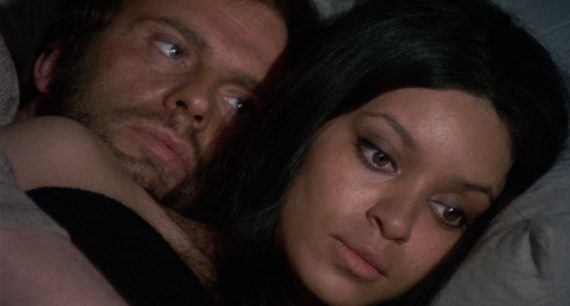 The performances are strong too. I didn’t find Jean-Louis Trintignant the most charismatic of western heroes but he does a decent job of selling his character’s motivations without uttering a word of dialogue. Much stronger however is Klaus Kinski, who had largely only been in supporting roles up to this point. Here he shows he can play the lead villain to a magnificent degree. His Tigrero is cruel, cold and calculated evil incarnate and he dominates the screen whenever present.

I also thought Vonetta McGee was excellent as the vengeful heroine, displaying simmering rage without ever going over the top. Some respect must also go to Corbucci for casting a black actress in a starring love-interest role at the time and giving her character much more to do than in most spaghetti westerns, where women tended to simply be there to sleep with or abuse.

The film is also quite beautiful to look at. Aiding this is the use of the spectacular locations in the Italian Dolomites. The snowy setting adds to the bleak atmosphere and a decent job is done of making the town sequences, which were filmed on set, match up. Gallons of shaving foam were used to create the snow here and it looks pretty good, even when meticulously restored and blown up on a projector screen in HD. 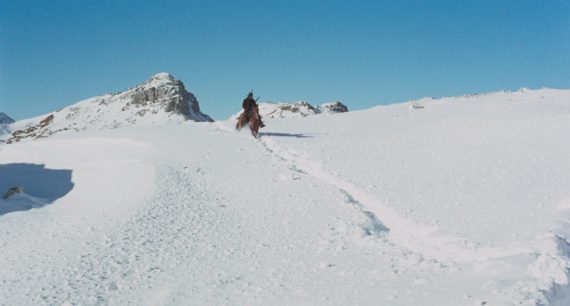 Before I tie things up, I have to mention Ennio Morricone’s score. The maestro’s work here is not as famous as his Sergio Leone soundtracks of the same era but it’s every bit as good. A rich and varied score, it has moments of great beauty in the love scene with Pauline and Silence, percussive excitement when the bounty hunters head out towards the end and even a subtly catchy theme tune that has a melancholic tinge.

So, as my heaps of praise will attest, The Great Silence more than lives up to its reputation. It’s a grim, expertly told and presented tale of a heartless and violent time and place. As such, it works like a bullet to the head of the heroic American westerns of the past.

The Great Silence is out on 29th November on Blu-Ray in the UK, released by Eureka as part of their Masters of Cinema series. I was a little worried about the picture quality when the film first began, as it’s a little hazy in the first scene, but that appears to be down to issues with the original material as it looks great after this, with a detailed and natural image. Audio is sturdy too, with both English and Italian options available. 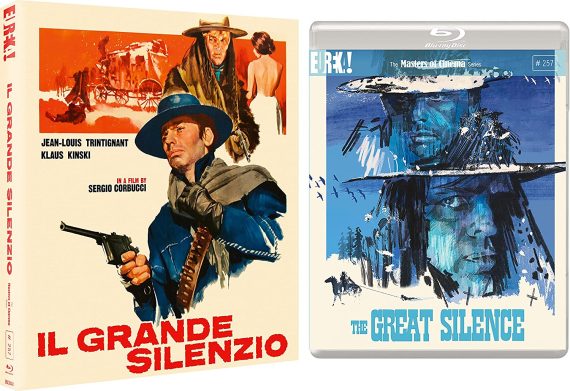 It’s an impressive array of supplemental material. Howard Hughes and Richard Knew’s commentary spends a little too much time considering possible films that were influenced by The Great Silence. In this sense and in general, it doesn’t feel quite as well researched as the other tracks here, but there’s still some interesting material in it and it’s worth a listen.

Mike Siegel’s commentary is much stronger. He really knows his stuff and has plenty of fascinating facts and anecdotes about the production to share, as well as information on the people involved.

Alex Cox’s track lays somewhere in between. You get a sense he’s more informed than Hughes and Knew but his track isn’t quite as rich as Siegel’s, perhaps due to its on-stage nature. It’s still recommended listening though.

Cox’s interview is very good too. He first sets up the film’s production before giving his thoughts on why he thinks it’s one of the best spaghetti westerns ever made, if not the best western, full stop. 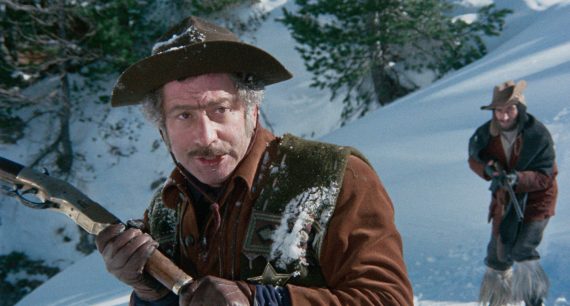 Austin Fisher’s interview is short but excellent. He provides a fine analysis of The Great Silence, discussing why it’s special among the mountain of spaghetti westerns made during the late 60s and early 70s.

‘Western Italian Style’ is wonderful. It gives a goofily enjoyable account of the state of the spaghetti western at the time of their peak. It also provides clips of Corbucci at work on The Great Silence, as well as Enzo G. Castellari, Sergio Sollima and Sergio Leone on other titles.

All of the behind-the-scenes material from The Great Silence used in that piece is edited together as its own short film here too. It seems a bit pointless to have it as a separate extra, but I guess it’s handy to have it in one film for ease of reference. The footage is great, offering an amusing glimpse of the production at times, such as showing an extra trying to open his bottle of beer with the barrel of his prop gun. It also includes a brief interview with Corbucci and Trintignant.

On top of all this, you get two alternative endings to the film. One is a preposterous ‘happy’ ending that is gleefully out of touch with the tone of the rest of the film. This seems like it was made as a joke aimed at any producers wanting a less bleak denouement and was only used in a few obscure territories. The other alternative ending is a compromise between that and the original finale, taking a more ambiguous approach. It’s a nice idea but doesn’t really work and was clearly just devised at the editing stage. Thank God most territories stuck with the original, gut-punch ending.

On top of providing plenty of background on The Great Silence, the booklet includes a lengthy rundown of Kinski’s spaghetti western roles. It makes for an interesting read.

It’s a wonderfully exhaustive package then, that finally gives The Great Silence the release it deserves in the UK. It comes very highly recommended.