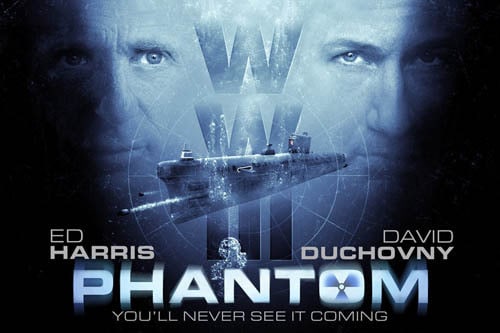 Phantom, Todd Robinson’s new film starring Ed Harris and David Duchovny is released in the US on March 1st (IMDB doesn’t list a UK date). Harris plays the captain of a Cold War Soviet missile submarine rushed into a classified mission, where he is haunted by his past and challenged by a rogue KGB group (led by Duchovny) testing a secret new weapon.

Prior to the film’s release, on Feburary 26, Milan Records are releasing the soundtrack album. Film composer and recording artist Jeff Rona delivers a mysterious and suspenseful score, which utilises a number of field recordings of sounds from within an actual submarine.

To show the lengths Rona went to create the score, Milan Records have released a fascinating little video looking at the composing, recording and producing process. Take a look below:

Phantom from Jeff Rona on Vimeo.