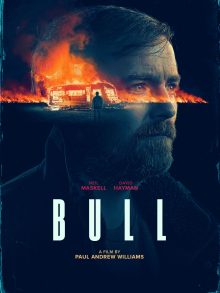 Screenplay: Paul Andrew Williams
Producers: Dominic Tighe, Sarah Gabriel, Marc Goldberg, Leonora Darby, Mark Lane
Starring: Neil Maskell, David Hayman, Lois Brabin-Platt, Tamzin Outhwaite
Year: 2021
Country: UK
BBFC Certification: 18
.
Duration: 88 mins
.
Bull is the ultimate revenge thriller with a body count to match. From the stone cold shooting in the intro you are left in no doubt about the intent and grittiness of the subject matter. Revenge, pure and simple, for something so heinous that only complete and total annihilation of the perpetrators will suffice, but what could have happened to set this off?
.
That answer is the focus of the entire film, and it is gradually revealed in scene-by-scene flashbacks intercutting the narrative. You’ll start to piece together how the main character, Bull, fresh from a 10 year stint in some hell-hole, is clearly hell-bent on revenge against the people that sent him away and took his son. He proceeds to methodically eliminate each and every one of his targets with artistic brutality. Shotgun blasts galore, fingers chopping off, fairground stabbings, caravan bonfires, general mayhem all around, and a finale that brilliantly flips the script on its head. What’s not to like?
.

.
The plot: Bull (Maskell) is an enforcer for a mob run by his father-in-law Norm (Hayman), a hard-headed, tough guy. Bulls wife, Gemma is an addict with Daddy issues and the apple of Norm’s eyes. Their son, Aiden, becomes the main bone of contention when they inevitably split up, and this sets up the tragic events that lead to betrayal, a lost decade, and the subsequent revenge bloodfest as Bull returns to make sure his Aiden is safe.
. 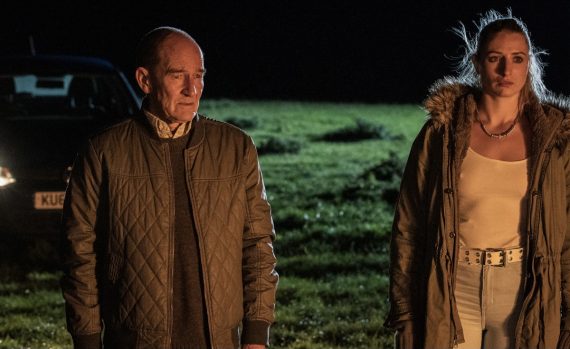 .
Family is a strong theme running through the film and parental bonds are used as a driving force for key character arcs. As a revenge film, it has nothing new to say about the character’s motivation, nor is it a different treatment of same. However, what sets this apart from many others is it’s relentless focus on the journey and mechanics of retribution, into which you are suddenly dropped and dragged along the body strewn search for Aiden. The aha moment comes at the very end, followed by a distinct knowledge that you’ll need to watch it all over again, with new-found perspective, to fully appreciate the work. Excellent effort!
.
Bull
2021-10-24
4.0Rating:
Reader Rating: (0 Votes)