Connoisseur of marmite cinema Sion Sono returns with his first English language film bringing Nic Cage, Sofia Boutella, the legendary Tak Sakaguchi (and a whole heap of his low-fi weirdness) along for the ride. Set in a post-apocalyptic East meets West dystopia, populated with oodles of oddball characters and featuring a story that involves Nic Cage’s convict being strapped into an explosive suit and tasked with rescuing the adopted daughter (Boutella) of a local corrupt governor (Mosely) from within the bowels of somewhere called Ghostland, Prisoners of the Ghostland had all the potential for hyper-charged cult movie madness! Hell, there’s even something about a curse that’s need breaking, Nick Cassavetes as a scarred gun wielding maniac, and a character called Ratman (!) thrown into the mix meaning this should have been full throttle fun but is instead maddingly ponderous.

There’s no doubt this is a Sono film through and through, from the eye-popping production and character design to the thick sense of dreamy weirdness to plenty of beautiful imagery, but much like some of his other extensive back catalogue it’s also sluggishly paced and sloppily executed. Love him or hate him, Sono has crafted some great and unique cinema (Tokyo Tribe, Love Exposure) and can even deliver slick macabre entertainment (Suicide Club) but Prisoners of the Ghostland unfortunately doesn’t deliver on its promise of uniting Cage and Sono in a tale of post-apocalyptic rescue. There’s plenty of creativity on show (certainly the impressive set that represents Ghostland) but it’s all so haphazardly put together, drifting from one meandering scene to another. Sure, the point may be a weird dream like state but with a concept and cast like this, Prisoners of the Ghostland should have been surper-charged with plenty of action to go along with all the arty weirdness.

Instead, it becomes a bit of a slog as proceedings never ignite and scenes and monologues seem to drone on. Cage (seemingly trying to stay within the Mandy/Colour Out of Space/Willy’s Wonderland style of creative weirdness wheelhouse) tries his best but even his energy seems somewhat stilted. His character at one point memorably shouts, “I am radioactive!” one hoping proceedings are about to kick into high gear but alas they never really do. Boutella and Sakaguchi also try their best with the latter getting to cut loose in a couple of brief cool fights towards the end. Yet, if this had been made in the 80s or early 90s (when these type of low-budget genre mashups were the norm!) it would have had some rollicking action and a sense of fun to go along with all the weirdness and eccentric characters.

Sono instead seems to be going for poetic imagery and gonzo genre stylings and if that’s your bag, then have at it but this really should have been more super-charged fun.

PRISONERS OF THE GHOSTLAND WILL BE RELEASED IN CINEMAS AND ON DIGITAL FROM 17 SEPTEMBER FROM ELYSIAN FILM GROUP DISTRIBUTION. 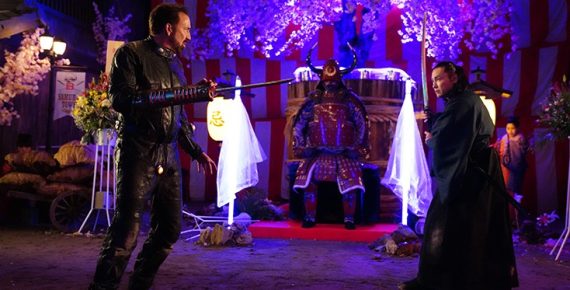