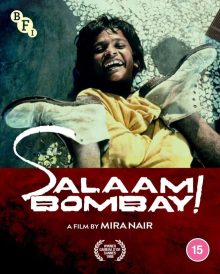 Mira Nair originally came into filmmaking intending to be an actress but soon ended up joining the ‘cinema vérité’ crowd as a director without any formal film training. She made a number of well regarded but often controversial documentaries in her mid-twenties. One of these, India Cabaret (which is included on this disc) contained a scene that sparked an idea for another project. Nair had also been inspired by the street children she’d met at the time of shooting the documentary. She wanted to capture how these people who had nothing still had a will to live and planned to make a film that would change the world (“the film is bigger than everyone making it” were her words).

With these grand ambitions, Nair felt she could have more control over the narrative by making it a fiction piece, so set out to make her feature debut in that form. The resulting film was Salaam Bombay! which was a huge critical success, winning the Camera d’Or and Audience awards at the Cannes Film Festival and becoming the second Indian film nominated for the Best Foreign Language Film Oscar. 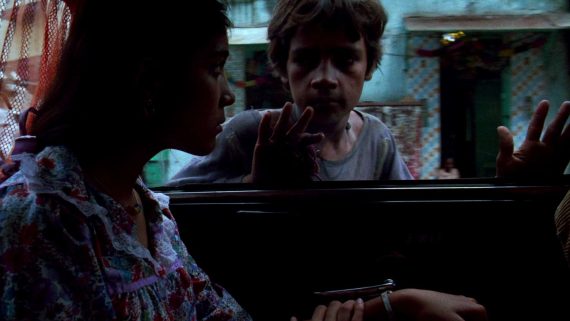 More importantly though, Salaam Bombay! did indeed change the world. The film was so successful, Nair was able to create the Salaam Baalak Trust to help street children in India. It has supported more than 105,000 children over the past 32 years. 22,220 of those who had run away or were lost have been reunited with their families and more than 29,000 children have been provided accommodation by the trust, accessing many services and finding new homes and families to replace what they may have lost or left behind.

It’s an important film then and, to honour it, the BFI are releasing Salaam Bombay! on Blu-ray with a wealth of extra features. I first watched the film 20-odd years ago and was very impressed, so used this release as an excuse to rewatch it. My thoughts follow.

Salaam Bombay! follows the trials and tribulations of a number of street children, chiefly Krishna/Chaipau (Shafiq Syed), who had been kicked out by his family to join the circus before being abandoned by them. He sells tea for a local merchant and Chillum (Raghuvir Yadav), a drug addict and pusher, takes him under his wing. 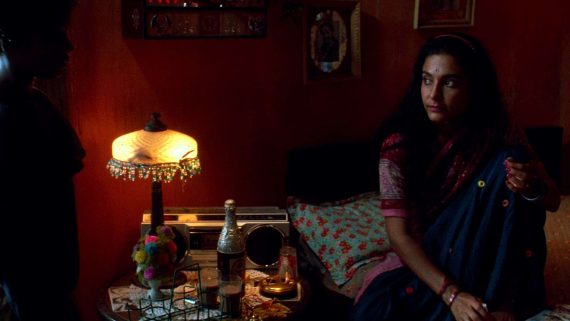 Chillum and Chaipau also become involved with a drug dealer and pimp known as Baba (Nana Patekar). This tough, heartless man is married to Rekha (Anita Kanwar), a prostitute, and the pair have a young daughter called Manju (Hansa Vithal), who spends her time with Chaipau and the other street children.

Salaam Bombay! is a powerful, exceptionally well-realised film. Using her experience as a documentary filmmaker, Nair crafts a story that feels incredibly authentic. She insisted on using many genuine locations, shooting in real brothels and real drug dens. It was not usual to shoot on the streets of Bombay at the time. Bollywood films back then (and likely still now) were mainly shot on sets with little sense of reality. 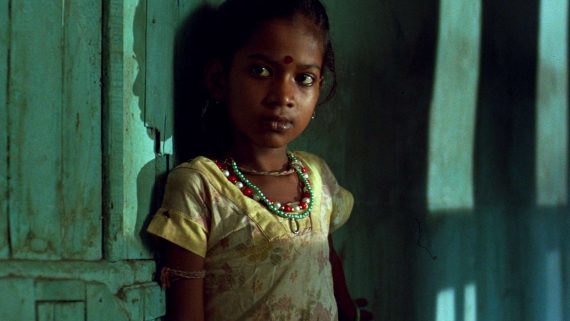 Due to these rough, often very cramped locations, and the fact it was hard to find financing (UK’s Channel 4 put up 49%, but Nair was still trying to find the rest of the money during production), the camera team had to develop some of their own special grip and camera equipment to be able to capture what they wanted. They didn’t have playback either and didn’t have the chance to watch dailies during the shoot. Instead, each day’s footage was sent back to New York for the editor to watch and give the OK, so Nair really had to trust the crew.

Despite these difficulties, the film is remarkably well made. Though the subject matter is tough and the difficult lives of the children never sugar-coated, there’s a vibrancy to the production that prevents it from being unbearably depressing. Not only do the rich colours of the slums pop on screen, but the characters and performances also show a depth of humanity that breathes life into every frame.

Though some of the primary adult performers are trained actors (a couple of whom would go on to become megastars in the future), most of the children in the film and some other supporting players are genuine slum-dwelling kids who bring their own experiences to their characters and performances. The crew grew so attached to the children, that cinematographer Sandi Sissel even adopted one of them after the production. He’s now part of the film industry himself and features in one of the interviews on the disc, along with his adopted mother.

The film also avoids simple black and white judgments and messages. It presents some complicated moral dilemmas about what is best for the children, for instance, particularly when it comes to Manju. Her mother loves her deeply and their precious moments together are beautiful on-screen but she’s in an abusive relationship with Babu and, due to her position and career, she’s forced to leave Manju outside or take her along whilst she’s sleeping with clients. So, it’s debatable as to whether Manju would be better off with or without her mother. 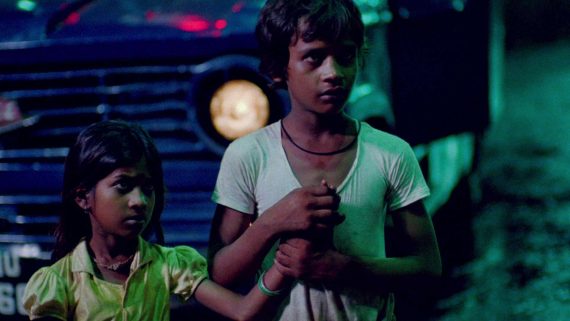 There are also some political statements to make in the film. On top of displaying the horrific levels of poverty in India and the difficulties in getting out of this, Salaam Bombay! examines the uncaring, ineffectual ways the authorities deal with children living on the streets. As such, the film came under criticism by the Indian government, but thankfully its worldwide success helped get the message out there.

Overall then, Salaam Bombay! is a deeply moving story of the harsh realities of the lives of those living on the streets of Bombay. Vividly realised by Nair, it’s a rich and believably authentic account that brims with life, even if it offers little hope.

Salaam Bombay! will be released on 21st June on Blu-Ray, released by the BFI. I was slightly disappointed with the picture quality. It may be due to the low budget nature of the film and the difficult circumstances under which it was made, but there’s a fair amount of damage on the print for a relatively modern film. I felt the saturation and contrast were a little high in places too. There’s a pleasingly natural grain to the film though and whilst the colours can look a touch boosted at times, overall they look gorgeous on Blu-ray. I’ve used screengrabs in my review to give an idea of picture quality. I didn’t have any issues with the audio.

– Indian Cabaret (1985, 60 mins): Mira Nair’s documentary about female strippers from a Bombay nightclub which provided the kernel of Salaam Bombay!
– Audio commentary by Mira Nair (2003)
– Sandi and Bernard Sissel in Conversation (2021, 51 mins): newly recorded discussion with the cinematographer and her son, one of the street kids from Salaam Bombay!
– Archive shorts (1906-1936), 31 mins): three gems from the BFI National Archive reflecting themes and iconography found in Salaam Bombay!, featuring city life in La vie aux Indes / Indian Scenes, an early Dickens adaptation of Oliver Twist and a look at tea production in India and Sri Lanka in Gardens of the Orient
– Original theatrical trailer
– **FIRST PRESSING ONLY** Booklet featuring a new contribution from director Mira Nair, new writing on the film by Manish Mathur and a biography of the director by Ellen Cheshire 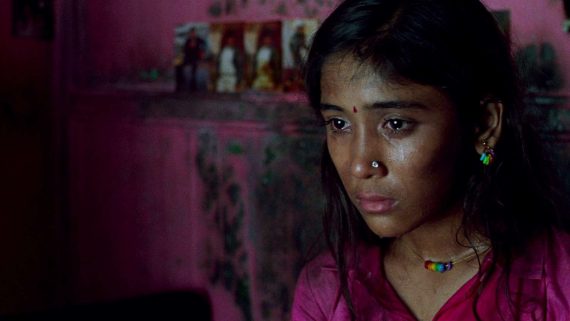 India Cabaret is a fantastic documentary about cabaret dancers in India. It discusses issues with equality in the country in general and the hypocrisy of men who damn the women working there whilst being happy to use their services, expecting them to act as their prostitutes. Running at an hour in length, it’s worthy of its own Blu-ray release. Nair gets her subjects (dancers, clients, bosses and family alike) to open up completely for the camera, making for an admirably frank and thought-provoking exploration of the subject. Like in Salaam Bombay!, she doesn’t judge either side too harshly, presenting different sides of the argument. Her camera captures the settings of the club and the dancers’ homes very effectively too, providing a strong sense of place. It really is an excellent film and makes me keen to see more of Nair’s early documentary work.

Nair’s commentary is wonderful too. She gives a detailed account of the production, which is fascinating and inspiring.

The interview sees Salaam Bombay‘s cinematographer Sandi Sissel and her son (who played one of the street kids in the film and was adopted by Sandi after production) come together to discuss the film, their careers and the difficulties of working in the industry as a woman and person of colour. There are also some very touching moments when Sandi discusses the circumstances of how she came to adopt Barnard and how it changed the both of them. As such, it takes a step beyond most filmmaking interviews and is a beautiful addition to the disc. 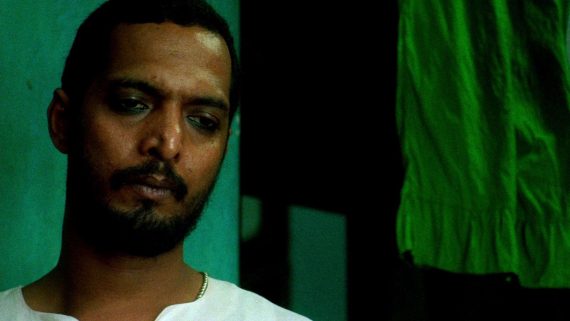 The three short films are welcome bonuses too. ‘Streets of Calcutta’ is a silent short from the early 1900s. It has a beautiful minimalist score and is a wonderful time capsule and travelogue, though it has a couple of scenes that may shock or offend.

‘Gardens of the Orient’ is a period short that shows the process of making tea. It’s quite fascinating to watch the footage, though the voiceover is amusingly dated at times, particularly when cheerily discussing the jolly good time the workers have at the plantation.

The ‘Oliver Twist’ silent short races through Dickens’ story. It’s fairly stagey in production, so nothing special, but it’s interesting to see this brief, early adaptation. It also acts as a reminder of the similarities between the novel and Nair’s film.

The booklet is loaded with essays on the film, so also adds a lot to the package and shouldn’t be dismissed.

Overall, it’s a wonderful package of extras for a superb film, so comes very highly recommended, even if the transfer doesn’t look pristine.