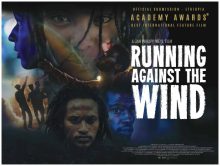 Montage Pictures are a sub label of Eureka Entertainment with a remit for releasing titles from what would broadly be called recent World Cinema (both theatrically and on home video). As far as I can see, Running Against the Wind is their first entry into African cinema and with that held some anticipation of what that would hold.

Running Against the Wind is a 2019 film from writer / director Jan Philipp Weyl which was selected as the Ethiopian entry for the 92nd Oscars but was unfortunately not shortlisted.

It tells the story of two young boys, Abdi and Solomon who grow up in a provincial part of the country and through a chance encounter, their destinies seem mapped out in front of them – one who wants to emulate one of Ethiopia’s greatest sons, Haile Gebrselassie (one of the greatest long-distance runners of all time), while the other finds inspiration from capturing life through the lens of a camera.

Dreams are one thing but finding the circumstances to allow the dreams to manifest is another. The death of a family member takes one of the boy’s path away from his home and to living on the streets of the capital in Addis Ababa. There he makes friends and relationships with others who will look out for each other, all the while a broken camera wrapped around his neck.

The early part of the boy’s lives is told in short vignettes as their bond is explored and ultimately laid bare as Abdi finds security while Solomon lives with his day-to-day survival in question.

The film cuts forward and we see that both boys find themselves in Addis Ababa in very different positions. Both are still chasing their goal, but Abdi is part of an elite academy looking to make it to the Olympics and the fame and success that follows that. Solomon is a young father who lives in poverty, struggling and surrounded by people whose desperation to get out of their current circumstances often leads to bad choices.

Neither is aware of the other and the film explores how their journey follows their desires and whether their lives run in parallel. The film is part sport film and part exploration of how circumstances and support are as important as talent. As probing as the story is, the film is even more beautiful to look at. The shots of rural Ethiopia are stunning and the cinematography is worthy of framing, printing and presenting on a wall.

The film has been accused of lacking a coherent narrative or structure but aside from the previously mentioned style of presentation the film ebbs backwards and forwards as the trails, tribulations and successes of Solomon and Abdi are probed and interweave. The story that is told has clear direction of travel and you can’t help but be drawn into Solomon and Abdi’s corner of the Ethiopian capital.

Running against the Wind is equal parts uplifting, melancholic and dramatic as the film reaches a crescendo. The performances throughout are understated as neither lead is representing an alpha male. You never lose sense of either’s upbringing or values in their quest to be the best of what they can be. It is an enjoyable watch whose pace picks up (sorry for the pun – it is intentional) right to the finish line.

Running against the Wind is released digitally on the 11th of June and has a physical release on Limited Edition Blu-ray on the 9th August.