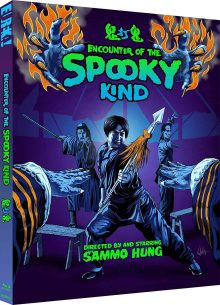 Though horror films have been a staple of western cinema since the early days of the medium, the genre took a while to reach Chinese and Hong Kong audiences. Other than some supernatural fantasies and ‘ghost romance’ films, true horror was little seen before the 1970s, when films like Black Magic and its sequel were released.

The 70s, of course, was also the period in which the kung-fu movie craze was at its peak, with Bruce Lee winning fans the world over at the start of the decade and Jackie Chan hitting the big time towards the end of it, making kung-fu comedies the latest trend.

However, Hong Kong was churning out so many kung-fu films during the decade that they were struggling to keep them fresh as the 80s approached. Sammo Hung, who was a couple of years into a directorial career, took a gamble on a new hybrid of genres in 1980, in a bid to reach audiences with the first film made by his new production company, Bo Ho Film Company. He took the martial arts movie mould and added both the popular comic approach as well as the burgeoning horror genre, using traditional Eastern folklore to make Encounter of the Spooky Kind (a.k.a. Spooky Encounters or Gui Da Gui). 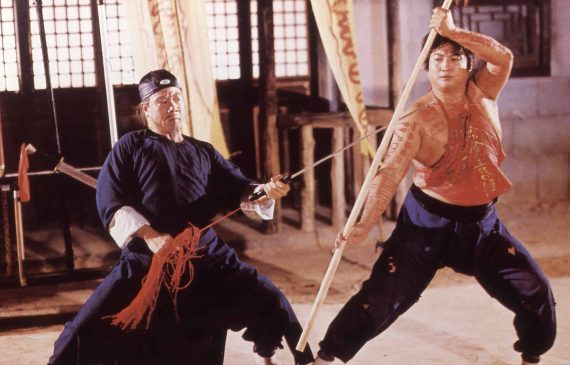 The film was a hit and helped kick start the jiangshi genre (horror based on the jiangshi of Chinese folklore, a reanimated zombie-like corpse with vampiric qualities that can be controlled by Taoist priests). The best subsequent example of this is Mr. Vampire, which was itself a huge success and spawned a number of popular sequels. Encounters of the Spooky Kind itself had a sequel, Encounters of the Spooky Kind II, though it was largely in name only.

To continue their fantastic range of Blu-ray releases of classic Hong Kong action movies, including Mr. Vampire, Eureka are adding Encounters of the Spooky Kind to their Eureka Classics series. I’m a fan of the film so eagerly took up the chance to upgrade my old DVD copy. My thoughts follow. 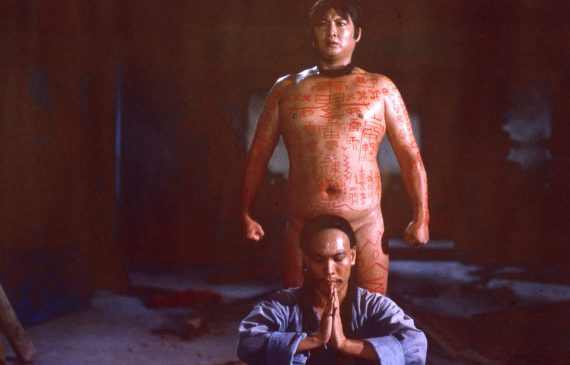 Encounters of the Spooky Kind sees Sammo play Bold (or ‘Big Guts’) Cheung, a rickshaw driver with a reputation for being brave. We see him try to uphold this by taking up a challenge to spend a night in a supposedly haunted house, where he must peel an apple without breaking the skin or something bad will happen.

The next day, he’s taking his boss, Master Tam (Ha Huang), to a secret rendezvous with his mistress. After hearing a tofu stand owner tell his story of when he was a rickshaw driver and he caught his wife cheating on him, Cheung pays his own wife an early visit. Sure enough, she’s up to something with a mystery man. The only clue Cheung finds is a single shoe. 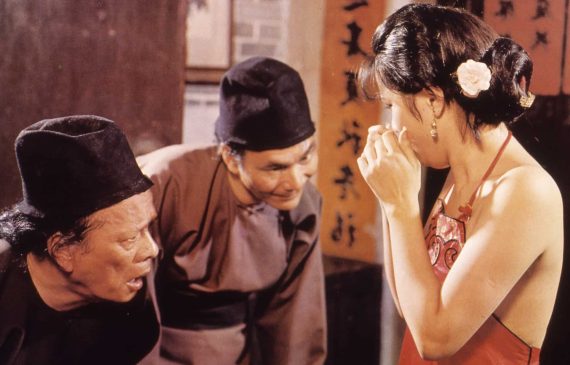 The audience knows who the culprit is though. It’s none other than Master Tam, who plots to get Cheung out of the picture so he doesn’t find out and tarnish the wealthy Tam’s reputation.

Tam’s plan is rather extreme. To avoid any direct involvement in his murder, he hires Chin Hoi, a corrupt Mao Shan sorcerer and Daoist master, to use the spirits to kill Cheung.

Help comes to Cheung, however, in the form of Priest Tsui (Fat Chung), Chin Hoi’s junior who disagrees with his master’s evil, mercenary ways. Tsui tells Cheung all the tricks needed to stave off the jiangshi and later has to use his own incantations to fight Chin Hoi and his summoned spirits. 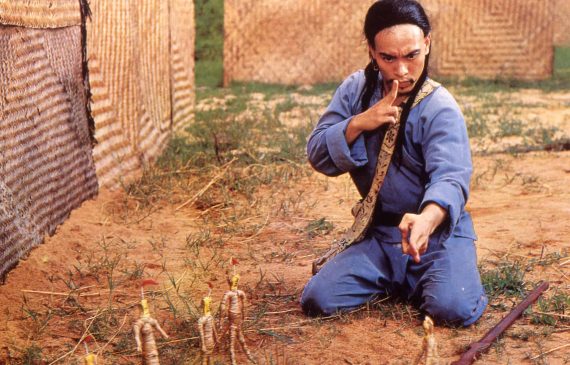 It’s preposterous stuff of course (surely there’s an easier way to keep Cheung from catching Tam in the act?) but that’s all part of the charm. As mentioned, Encounters of the Spooky Kind was the first film to bring the folkloric Eastern traditions of spirits into martial arts movies and, much like with Mr. Vampire, it’s the unusual nature of these that make the film so much fun to Western audiences. For instance, the jiangshi can only hop as their limbs are too stiff to walk or run and they can be warded off by things such as special mirrors and chicken eggs.

It’s more than just these quirky superstitions that make the film a success though. Great credit must go to Sammo for stringing all the ideas and genres together. The balance between horror, action and comedy is perfect, without any getting in the way of the others.

Also, though the story can be episodic, it’s constructed effectively enough to keep you engaged and motors along, despite the film being a touch longer than most kung-fu films of the era and there being very little action in the first half. 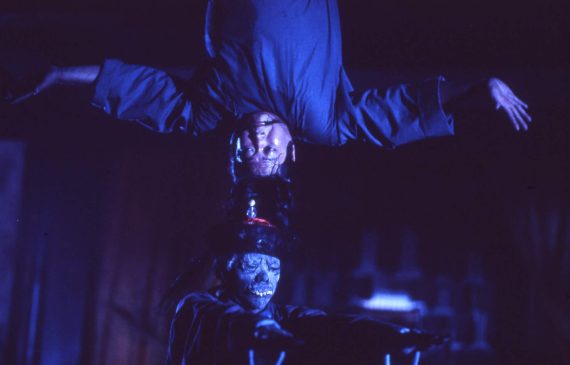 Speaking of which, though it takes a while to come and the film is also made up of horror and comedy set-pieces, the fight scenes are fantastic. The finale is suitably thrilling and epic, with some wild possessed fighting, but it’s an earlier scene that really stands out for me.

It’s a teahouse fight, which might sound cliched by the location, but what makes it special is that Cheung’s hand is being controlled at a distance by Chin Hoi. The villain is making the unwilling Cheung start a fight with the local police. It’s a cleverly choreographed sequence that showcases both Sammo’s knack for physical comedy and acrobatics. It also stands out as being one of a couple of scenes in the film that are notably similar to scenes in the Evil Dead franchise, which would begin a year later. I’m convinced Sam Raimi must have seen Encounters of the Spooky Kind before Evil Dead 2, in particular. 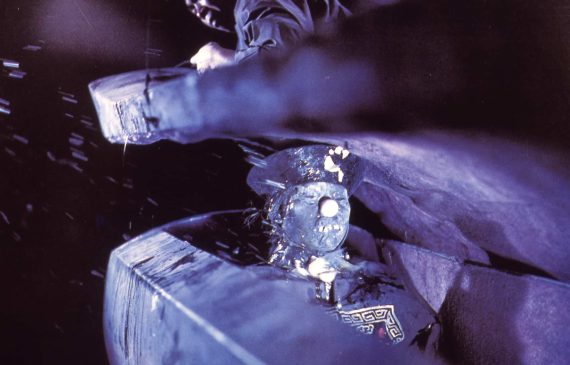 I’m a big fan of Mr. Vampire (as my 4.5 star review will attest) and, on top of it being a huge influence on the film, Encounters of the Spooky Kind is better in a number of ways (including the level and quality of action) but the later film has a slight edge overall, in my opinion.

This preference is partly due to Mr. Vampire being a slightly more polished take on the idea, but also because Sammo adds a couple of bad taste ‘jokes’ to Encounters of the Spooky Kind that upset the film a touch. One of these sees the tofu stall owner suddenly suffer a stroke, preventing him from helping Cheung, getting wheeled in with a goofily contorted face to prove this. The worst culprit, however, is the final shot of the film, which sees Cheung beat his wife up after discovering the truth about her infidelity. Yes, she’s one of the villains of the piece and deserves some sort of comeuppance, but the way Sammo attacks her is shockingly aggressive and out of character, ending the film on a sour note.

Away from this, however, Encounter of the Spooky Kind is an immensely enjoyable genre-blending extravaganza. With a great balance of horror, comedy and action, it’s a real treat that’s sure to appeal to any genre movie fan. 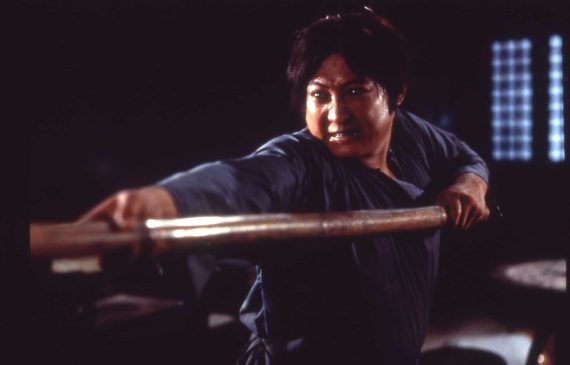 Encounter of the Spooky Kind is out on 21st June on Blu-Ray in the UK, released by Eureka as part of their Eureka Classics series. Picture quality is first-rate, with strong colours and plenty of detail. You get a variety of audio options too (see below).

As usual, Frank Djeng’s commentary has a perfect mix of production and background information with cultural and linguistic context to some of the plot devices and gags.

I’ve got a feeling the archival Sammo interview has appeared elsewhere on another Eureka release, but I’m not sure. There are certainly some familiar answers and it discusses his career in general rather than just focussing on Encounters of the Spooky Kind.

Like Djeng’s commentary, the booklet helps explain how the film uses Chinese folklore and beliefs, and how the perception of these differs between the West and East. It’s an interesting read and tops off another fine Hong Kong action release from Eureka.