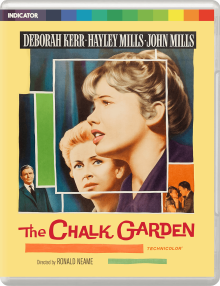 It is a well-worn adage of film fans to actively avoid watching trailers. In modern times, this has been due to whole plots being spoiled or revealed in the space of a 90 second montage but for older films, it often sensationalised or misrepresented what the film’s themes and ideas are.

Such was my experience of the latest release from Indicator, the 1964 film The Chalk Garden. The trailer suggests that the film is centred on how a newly employed and mysterious governess (played by Deborah Kerr) works with a problem child (Hayley Mills). The role of the young girl comes across as churlish and annoying, even in a short run time. A sort of extended Mary Poppins with fewer fantastical themes is promised and what we get is something wide of that mark. Thankfully I can venture that this is completely for the better.

The jist of the promised story is broadly represented here but it would be clearer to say that this film is a representation and difference of the lives of four women. The central relationship of Kerr’s Ms Madrigal to the younger Laurel is the real driver as each attempt to get to the root of each other’s unhappiness and demeanour. It is a clever piece of writing as the viewer is left to root and support each character to reveal more about themselves. While you could feel besmirched by Kerr’s cold nature or aggravated by Mill’s obnoxious pokery, the result is a feeling that you hope each character makes peace with their circumstances.

The other female characters of the grandmother (and custodian) Mrs Maugham and the mother, Olivia, play secondary roles but are used as a stark contrast as women with differing experiences and backgrounds. The setting of a grand stately country property suggests that class differences are at play. This is reflected in the fashion of each female character. Each character carries themselves in keeping with their stage in life. The matriarch character of Mrs Maugham is the one who I identified as the villain of the piece (if there is one here at all) but I suspect that may vary for each individual as they watch it.

The other main character is played by Hayley Mills’ real life father John. He represents the man servant of the house, Maitland. The chemistry and comfort of father and daughter is used to good effect, numerous times within the film. It gives the film and dysfunctional family unit on show a punch of warmth at regular points within the film. He acts as the father figure that is missing from Laurel’s life – a point that was (obviously) not lost when It came to casting, I’m sure. Maitland carries the warmth in his relationship to each character right throughout the film.

While I enjoyed the flow, storytelling and themes on show in the film immensely, it definitely has flaws that hold it back from having achieved greater notoriety and popularity. Hayley Mills’ performance is a triumph, but the strength comes in her verbal sparring with each character. Outside of playing off other performances, her actions are often over the top and not in keeping with a girl of her intelligence. I was occasionally left frustrated at the playing to stereotype of troubled child.

Alongside the beautiful location shooting and cinematography, there is an elaborate sweeping orchestral score that, while beautiful, overly dominates scenes where a lighter touch was needed. It does fit the grandeur of the real life location shooting and would have made a welcome contrast with anyone who is, or was, a fan of the successful stage performance.

This was a relaxed two-sided conversation around the main themes of the film, that concentrates on many of the performances of the cast. It was well-researched and added a lot of interest to a second watching. Each commenter brings their own smart observations, and it was noticeable that they enjoyed each other’s company during the recording. It also served to solidify many of my own thoughts about the film as they elucidate the critical response at the time of the film’s release. The choice of commenters was a great choice in bringing the themes of roles of females within a family unit to the fore.

As usual with Indicator releases, this runs as an additional commentary track. This audio interview gives the director Ronald Neame, reign to talk about his film career in detail. I often struggle to engage with these types of interview unless I am familiar with the director or crew member’s work but your mileage may vary.

A warm and engaging conversation with a person with memories of the production. These include working with his wife on the production. I enjoyed the relaxed nature of this interview and felt in keeping with the feeling I had of the film at the end.

An interesting curiosity that showed some of the Mills family acting more candidly during shooting. It gave a good sense of how strong the relationship between the family was on the whole.

This type of extra is one of my favourites. David Huckvale sits at his piano and analytically breaks down the career of Malcolm Arnold before dissecting the score in terms of mood and intention. I’ve stated that I thought the score was overwrought in terms of relating of the film as a whole, but I loved this extra nonetheless.

A fascinating conversation about the playwright and her journey to not only get the film to screen but also the lengthy process in getting The Chalk Garden on stage at all. It also touches on how the casting of the stage play, played into the casting for the film itself.

The Chalk Garden is a release that I was pleasantly surprised by. There are flaws in the end result but the strong cast and crew make the production a success on the whole. It is ably supported by its beautiful location and the usual truckload of considered extras. It is another winner for the Indicator and a film I will look forward to revisiting in the future.