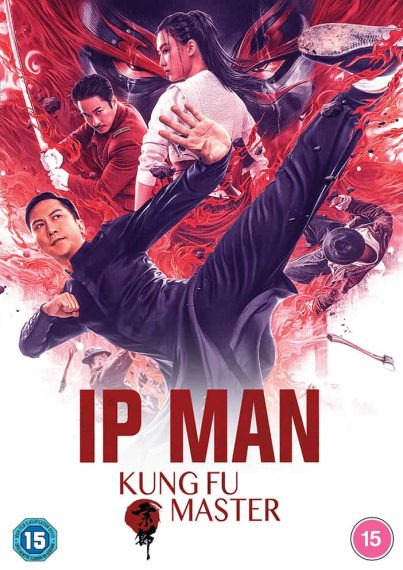 With the success and popularity of Donnie Yen’s Ip Man franchise, recently wrapping up (supposedly!) with Ip Man 4, Ip-sploitation seems to be in full swing with alternative takes (The Grandmaster), spin offs (Master Z: Ip Man Legacy) and just plain cash grabs (Ip Man and Four Kings) all vying for Ip Man related success. The latest, sitting firmly in the cash-grab stable, is Ip Ma: Kung Fu Master which while it doesn’t reach the heady heights of the Donnie Yen/Wilson Yip franchise, is a short, breezy, fight packed (and mostly) fun B-movie.

A young Ip Man (Dennis To Yu-Hang: who wouldn’t you know it was in Ip Man 1 & 2, as well as the rather decent spin-off The Legend Is Born: Ip Man) is a police officer in Foshan trying to keep the peace and bring the infamous Axe Gang to justice. When their leader Sanye (the indomitable Michael Wong) is killed in custody, Ip Man is targeted by Sanye’s daughter Qing Chuan, leading to an inevitable tussle. However, it seems Sanye was assassinated with the invading Japanese behind the kill, meaning Ip Man and Qing Chuan may need to team up to fight a bigger enemy.

At a swift 80 minutes Ip Ma: Kung Fu Master fairly throttles along trying to cover as much early Ip Man history as possible as well as cramming in as many fight scenes as it can. This approach is both good and bad, meaning we are rarely far away from Ip Man’s next fight scene (good) but much of the narrative is rushed (bad). So, we have Ip Man taking on the Axe Gang only to then see them as allies; he resigns from the police force; his wife gives birth to their first child; he also teams up with an old acquaintance of his master (leading to the briefest of training montages!); he takes on the moniker of the Black Knight to help protect the people of Foshan; and the Japanese continue their corruption and hold a martial arts competition leading to he foreseeable showdown between Ip Man and an evil Japanese General.

Phew! That’s a lot to cram in, especially for an 80-minute B-movie and it does often feel rushed or as if the running time has been cut down to get to the fight action quicker. Certainly, the plot point of Ip Man donning a black mask and fighting crime as some sort of superhero is introduced and rushed through so quickly, you wonder why they even included it! Which is a shame, as it had the potential to be one of the cooler aspects of the film. Still, for all its muddling of plot there is plenty of fight action, that despite what the rest of the internet might say, is pretty decent and while this is certainly a cash in on the current popularity of Ip Man, the cast and crew do try to inject some style into proceedings.

The overly critical will no doubt cry foul and the pacing/narrative could have been slicker/clearer but those who enjoy a decent B-movie, don’t mind a bit of Ip-sploitation and are looking for quick kung fu fix, Ip Ma: Kung Fu Master should hit the spot.