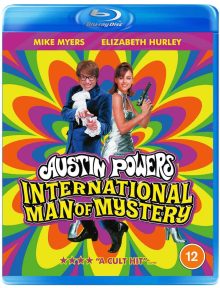 There once was a time in cinema where spoof and parody films weren’t considered just to be cash grabs or immediately terrible (I’m looking at you, the two of the six writers of the original ‘Scary Movie’) and the output was a lot more original in approach and in 1997 ‘Austin Powers’ was one of the most successful even spawning two sequels in the form of ‘The Spy Who Shagged Me’ (1999) and ‘Goldmember’ (2002). Coming back to Blu Ray, it’s a great chance to revisit the first film and whilst certain scenes of the sequels may stick in the mind a bit more, there’s a lot in the first film that helped it to stand out as a successful comedy. Unlike a number of other genres, comedies (specifically spoofs, satires and parodies) are often the hardest ones to judge when looking back at older films. Rarely is there a timeless classic in the sub-genre that still manages to inspire laughter outside of a nostalgic view (unless we’re talking about films such as “Airplane” or “Young Frankenstein”) as these films were watched by many at a young age and that sense of humour reminds us of what we found funny the first time we watched them. Fortunately in the case of “Austin Powers” with it being a riff on the spy films of old, the tropes it’s poking fun at have remained constant (even though the tone has changed several times) resulting in a lot of the jokes still feeling relevant in their absurdist view of the spy genre. With a focus on smarter writing and a great set of characters, the first film in the ‘Austin Powers’ trilogy is able to make its jokes without going into gross-out territory (like they did in the sequels with the Fat Bastard character) and some of the exchanges between characters are still incredibly entertaining. Originally being rated 15 compared to its now released 12 status, its initial rating was due to the use of language and ever so slightly adult themes but it never goes overboard in those regards.

Ludicrous as it is to write down and explain the film’s plot, it opens in 1967 with the swinging sixties and sees secret agent Austin Powers, International Man of Mystery on a mission to stop his nemesis Dr Evil before he can fulfil his latest diabolical scheme. Unfortunately Austin fails to do so as the supervillain cryogenically freezes himself with the aim to return in the future to carry out his plans for world domination and so in turn Austin decides to freeze himself as well to ensure he’s there to save the day. Thirty years later in 1997 and Dr Evil has returned with an outdated set of motives and little clue to the financial changes of the world in the time he’s been away and Austin has to track him down and save the world with the help of his new partner Agent Kensington (the daughter of his original partner in the 60s). All in all it’s a loose plot but anything more complicated and the film wouldn’t be able to focus on the jokes it needed to make. The early Bond films and other pieces of spy media that it bases itself on had a similar approach to using ridiculous setups but that was one of the most endearing parts about these properties in the 60s in both film and television. 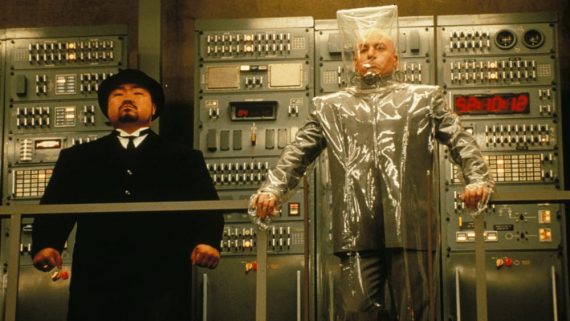 Once it moves to the modern-day, this is where most of the jokes begin and it showcases its talent at subverting the tropes within the spy genre that the audience has grown accustomed to. From a henchman who throws a shoe to the “highly irritable mutated sea bass with frickin lasers on their head” in an easily escapable situation and of course not forgetting the steamroller’s path of destruction. Overall the lampooning of the various influences for the film are dealt out at a strong pace alongside sight gags and one-liners with a great main and supporting cast. There’s bound to be slight debate as to whether this film holds up today but the wonderful thing about such a film is that if there’s enjoyment to be had from the viewer then that’s all that needs to be said.

Disc Contents
As for Icon Film Distribution’s new disc itself, the picture quality is decent enough although don’t be expecting a full 4K level of quality and whilst its a solid audio track there are no subtitles on the disc which is an unfortunate oversight and ultimately it’s far from the definitive version it could be that this film deserves but if you’re looking to revisit it based on a prior love for the film then it’s a decent enough purchase.

When it comes to the intended audience of this new release, the unfortunate truth is that it doesn’t contain all of the special features that were originally included in the DVD release and so there’s no longer the director’s commentary or the deleted scenes which I can only imagine are due to rights. The other interesting aspect is that the previous Cult Films Blu Ray release contained only two bonus features that aren’t available here either. It’s a shame that this isn’t the complete package allowing new and old fans of the film the chance to own a definitive version, but the offering of content here has a total run time of 33 minutes and is presented in SD as they were all made at the time of the film’s release. Whilst the special features on offer don’t amount to much of a runtime or any level of cohesion in their own sections, it’s not the fault of this release as this is simply the level of special features that DVD had in the early years of its lifespan.

Special Features:
Austin & Vanessa Character Featurette – Presented through the perspective of the characters and features footage from the film (these same clips are also present in the Character Soundbites section) and even though it reveals a few bits of character information that isn’t referenced in the film, unfortunately it removes the humour from the scenes it uses to coincide with the references they make as it feels far too rushed and quickly edited together

Character Soundbites – This is a very jarring collection of clips as there’s several from each actor describing their role in the film but the way they were filmed and edited when they were first being put together cuts out the remaining audio when the sentence is finished and the footage continues resulting in seeing a new sentence being spoken without sound and then it abruptly cuts to black.

B-Roll – Before it became commonplace to include featurettes and documentaries that went in-depth to the creation of a film, B-Roll was the closest you could get to any sort of look behind the scenes and when it’s presented in incredibly short clips in SD when played on an HD TV, it all comes off as rather awkward much like looking at low-quality homemade video recordings. It showcases certain parts of the shoot such as the opening dance number and several stunt setups with the Fembots as and also takes a look at the shooting of the musical interlude sections with the band Ming Tea.

TV Spots & Clips – A collection of 4 TV spots at 15 to 30 seconds each featuring different clips from the film under separate themes made up of Secret Agent, Swinger, Not His Time and Phonograph as well as 7 TV clips which are full short scenes from the film. With these clips being displayed separately they lose much of the humour found in the full film through the lack of context and unfortunately feels like the timing is off with the playback and so the delivery of the jokes falls flat.

Ming Tea “BBC” Music Video – Ming Tea, a band created for the world of Austin Powers made up of musicians from other acts play their song ‘BBC’ fronted by the Austin Powers character. It’s got a catchy element to it and even before watching the video on the disc, I recalled the chorus so it’s definitely got some staying power for better or worse.

Austin Powers: International Man of Mystery - Blu Ray Review
There’s nothing new here in the way of new special features that look at the making of the film which would be great to see especially twenty years on and as an unfortunate result it quickly feels more forgettable as a release however if you’re simply a fan of the film and special features don’t matter then there’s still fun to be had with it if you’re looking to own a copy but just know that certain older special features aren’t included.
2021-04-22
2.5Overall Score
Reader Rating: (0 Votes)