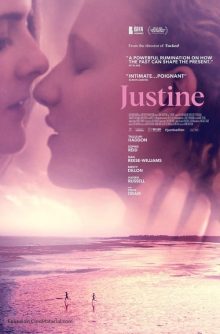 Jamie Patterson’s Justine is a difficult yet sensitive study into addiction among young adults. While it doesn’t step out too much from the crowd, it is a film that relies upon and excels from the performances of its two leads.

Justine (Tallulah Haddon) is a young woman with fierce intelligence but an equally strong appetite for self-destruction. Along with her only friend Peach (Xavien Russell), she finds herself suffocated within a world that makes little sense. One where alcohol is the only escape from her view of a hopeless future. Her probation officer Leanne (Sian Reese-Williams), and her doctor (Steve Oram) try to guide her back into society. But Justine understands all that society can offer her and doesn’t want to play by its rules.

Despite the constant wearing down of Justine, the idea of hope never appears to be too far away from her, thanks to her tiny support circle. When given this support, Justine thrives, yet any minor misstep leads to potentially disastrous results with any addiction. Patterson gives his audience a bleak story that, at times, causes the audience to get dragged down with Justine. Throughout, there could be a struggle to feel for her as much as we do feel for Rachel, her partner. Innocent enough to what has gone on, she has fallen for a woman who has and will have an issue in her life. A trick feels as if it has been missed as we focus so much on Justine. With more time available, Rachel could have been used to help elevate the entire piece.

That said, none of that should be at the cost of what we witness involving Justine. This is a compelling character study over what drives people so young to this type of addiction and, as they are so young, how fruitless everything else around them feels. Justine is easily forgotten when talking about alcohol addiction, certainly on screen as that is usually reserved for older men. This is a self-destructive person who is worn down due to her circumstances and tries to push away those who are there for her because of her experiences. Her best defence is to be on the offence continually, be alert to possibilities of fracture. If one appears, make sure to make it a full break so (in her mind at least) to be free of failure.

This is where Haddon and Reid’s chemistry carries the film and their interactions and then relationship. Rachel desire to follow this wildcard of a human is realistic; some people are naturally drawn to people who are the opposite of them. With Haddon’s Justine, we see a person desperate for love and affection but who has no cognitive ability to keep it due to her tendencies. Haddon is a revelation in the role as we see both where Justine could be in her life and, more often than not, where she ends up. A damaged character who needs love more than she could ever know. Reid counterbalances this perfectly with her performance. Within the film’s final scenes, we see that there is determination in her that Justine needs to get through life.

Director of photography Paul O’Callaghan’s handheld camera helps ground the film and showcase Justine’s forced isolation from those who care for her and the desolation as she spirals. Equally, his careful camera follows Rachel and Justine’s relationship in an awkward way. Keeping its distance at the beginning of the relationship and slowly easing its way in as this relationship blossoms. Eventually, it eases back out to linger on that isolation Justine thinks she has in her life when their relationship hits the inevitable rocky phase. Yet O’Callaghan’s camera never leaves Justine’s side, staying with her through the absolute worst moments over a two-month span. Thanks to the handheld framing, we feel as if we live in these moments; we are there for the therapy sessions and the awkward glimpses of intimacy. Patterson and O’Callaghan make sure that we are uncomfortable almost entirely throughout the film, even as the relationship blooms. A voice in the back of our head is warning us of something. Much like what is presumably going on inside Justine’s mind.

The decision to go for a non-linear narrative hurts Justine as the film tries to weave ideas that would not be necessary if it was played straight through. By muddling with the story, the impact of the events throughout the film is lessened. Although it is clear that this is to show how Justine thinks when she is in and out of her drunken state, it can also disorientate the viewer. With this story, telling it linearly would be far more impactful.

While Justine is a tale of alcoholism, it is also about love and it’s the fact that it is so sincere with its portrayal of these two characters that wins you over. Of course, being sensitive to such a relationship is what you would expect from Patterson, considering his previous work. In fact, Patterson is seemingly far more comfortable working through Justine and Rachel’s relationship and the emotional impact on someone who has an addiction than it is on the addiction’s actual narrative. At times her spiral borders on cliché, yet the pull of wanting Justine to be okay because of Rachel’s presence in her life is what keeps the viewer glued.

While there are moments of frustration in Justine, the pros far outweigh the cons. This tale of love in such an unstable environment for it to succeed is where the film shines.