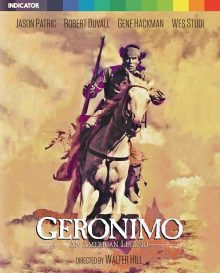 In the early 1990s, the American western enjoyed quite a big resurgence. Dances With Wolves kicked things off in 1990, becoming a surprise smash hit at the box office and taking home numerous awards, including 7 Oscars. Unforgiven and Last of the Mohicans, which came out in 1992, were also great successes and the genre saw a raft of titles looking to cash in on the revival.

One film riding this new wave of westerns was Walter Hill’s Geronimo: An American Legend, which was released in 1993 (though it had been in development since the late-eighties). It saw the director revisit the genre after making The Long Riders back in 1980, though most of his work had a flavour of the genre in its genes. Geronimo seemed like a bit of a departure for Hill though, with a more deeply rooted sense of history and a grander scale, focussing on the final conflicts between the Native Americans and the white settlers taking control of the country.

The film was a massive flop, earning only $18 million on a $35 million budget, and received mixed reviews. It didn’t deter Hill from making westerns though, following the film up with Wild Bill and Last Man Standing (and several more in later years). Though largely forgotten, Geronimo has seen some stand up for the film over time, claiming it’s an underrated classic from the director’s back catalogue.

Indicator seem to agree, as they’re releasing the film in a Blu-ray package filled with the usual slew of special features they’re becoming famous for. I’m a big fan of Walter Hill but haven’t seen the film, so eagerly snapped up a copy to review.

Geronimo views the dying days of the conflict between the Apaches and the United States government, through the eyes of 2nd Lt. Britton Davis (Matt Damon). He’s a fresh recruit, who’s sent west to support 1st Lt. Charles B. Gatewood (Jason Patric) in escorting the famous Apache warrior Geronimo (Wes Studi) to a military camp, where he is set to surrender before being forced to live on a reservation.

Geronimo accepts his fate but, after growing frustrated with the way he and his people are treated and how the government continuously breaks its promises to them, he and a band of Apache warriors escape the reservation and once again stand against the U.S. army.

Brigadier General George Crook (Gene Hackman) attempts to foster peace between the sides, bringing Geronimo back into custody, but when the government backstab him once more, Geronimo escapes yet again.

Crook resigns after this and is replaced by Brig. Gen. Nelson A. Miles (Kevin Tighe) who is less sympathetic to the Apache cause and vows to track Geronimo down and put an end to his rebellions once and for all. When Miles’ efforts fail, he calls upon Gatewood and Davis, who better understand Geronimo, to help bring him in.

In some ways Geronimo is typical of Hill’s work, focussing purely on men in a world of violent warriors with their own code of honour. However, in other ways this feels quite different. Though charting the closing period of a war, the film is less about two sides trying to defeat each other on the field of battle and more about a war that has already found its victor but in which the two sides are trying to agree on terms of peace.

This approach may be what put some people off at the time of release, as many might have expected an action-packed western war movie from Hill. To be fair, there is still quite a lot of action though. A few violent, bloody battles are shown, complete with a hefty number of extras and some spectacular horse stunts. There’s even a brutal barroom shoot-out near the end.

I believe the main reason why the film didn’t fare well though, and the reason I didn’t warm to it as much as I thought I would, is its tone. The film is very much a dour affair, with no humour and not enough heart to give the film any real sense of passion or humanity.

I also wasn’t a massive fan of the cast, which is surprising as, on paper, it’s fantastic. Hackman is a pleasure to watch as always, but he isn’t given a great deal to do. Similarly, Duvall is excellent and delivers some of the film’s most heartfelt moments, but he’s not one of the lead characters. Instead, the film is led by Patric and Studi, who are not bad, but too one-note and sullen to carry the film. I found some of Studi’s Apache language scenes with Geronimo’s comrades a little stilted too, possibly due to the fact the actor had to phonetically learn his lines. Damon, who was a relative newcomer back then, fits the role nicely, but he’s an observer of the action more than he is an active participant. His character acts largely as the point of view of the audience, so he’s not particularly interesting.

I don’t want to berate the film too much though as, on the whole, I actually liked it quite a lot. I think my annoyance is more aimed on the fact that I felt it was close to being fantastic. It’s beautifully made, for one, with some stunning location photography from Hill’s later-to-be regular cinematographer Lloyd Ahern.

I also appreciated the balanced approach to the subject matter. Given the period in which the film was made it’s practically a given that the Native Americans wouldn’t be cast as faceless villains like they were in early westerns, but I admired the fact that none of the characters on either side were made out to be 2-dimensional, evil-doers. The U.S. government doesn’t come off well, showing how they repressed and mistreated the Native American people, but on a character level, the American army officers are made out to be good people that respected the Apache. Miles is an exception, but even he isn’t drawn too simply and grows to accept that his approach to capturing Geronimo isn’t effective. The ‘good guys’ aren’t perfect either. Geronimo is shown to be an honourable man fighting for a good cause but he still kills and scalps people. Gatewood is pretty squeaky-clean, I guess, but he also continues to work for the U.S. army, despite his disagreements with how they are dealing with the Native Americans.

Ry Cooder’s score is interesting too. With Hill going for an authentic feel to the film, keeping events and characters largely based on actual accounts and records (though with artistic licence used here and there), Cooder wanted to match this by using music that kept with what might have been heard at the time. Nobody really knew how Apache music might sound though, so the composer found himself in a bit of a quandary and didn’t want to go down the usual pan-pipe route. Instead, he did some research and found that some believed Tuvan throat singing to be close to how the Apache might have made music. He employed a group to help him record certain tracks, as well as bringing in western music to represent the U.S. side of the story. It makes for an unusual but fitting background to the film. The final piece of music that plays over the end credits is particularly moving.

So, overall Geronimo is a classily produced, handsomely mounted account of the end of the wild west and the final attempts of one Apache warrior to prevent his people from being doomed to a life of repression. Though the mistreatment of the Native Americans is made clear in the film, it admirably avoids one-dimensional heroes and villains for the most part. Its solemn approach makes it feel a little too dry perhaps, but, on the whole, this is grand, classic cinema with an important story to tell.

Geronimo: An American Legend is out on 25th January on Blu-Ray in the UK, released by Indicator. The picture quality is fantastic. The image is rich with colour and detail. Audio is equally robust.

There are plenty of special features included in the package too:

The commentary is incredibly insightful. The contributors have a great knowledge of the history behind the story so help you better appreciate the film’s accuracy, as well as learn of aspects of what happened beyond the confines of its 115 mins running time.

Hill’s interview digs into his intentions behind the film and details the production process and relationship with his collaborators. It’s well worth a watch. The short Studi and Cooder interviews are decent too.

I really enjoyed the lengthier interview with Cooder. I’m a fan of his music on and away from films, so it was great to hear him discuss his work. He’s an entertaining speaker and his unusual approach to film music is fascinating to hear about.

Tavernier’s interview is excellent too. He gives a thorough analysis of the film in 36 minutes, explaining why he thinks it’s Hill’s finest. He also discusses how the film interprets what actually happened. A few changes were made for dramatic licence.

Kim Newman also provides an interesting piece, looking at portrayals of Geronimo over the years and how they match up to existing evidence about the man himself.

The booklet is as excellent as ever too, being filled with essays, images, period reviews and diary excerpts from the co-writer Larry Gross. The latter is particularly good, offering a candid look at the production and issues that arose at each stage, including very personal thoughts Gross had about the film as it developed.

So, it’s another recommended release from Indicator. The film isn’t perfect, but it’s still well worth watching and the abundance of exemplary special features make up for any shortcomings anyway.