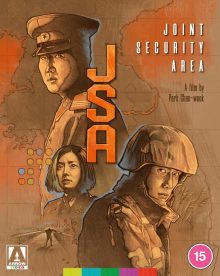 JSA – Joint Security Area was not Chan-wook Park’s first film but it was his first big success. His first two features came and went with little fanfare, leading Park to work as a film critic instead for a while. JSA however, became the highest-grossing film in Korean history at the time (aided by the fact it’s based on a popular novel by Sang-yeon Park). International success wouldn’t come until Oldboy three years later, but JSA did win a few awards overseas and paved the way for what was to come.

JSA is a film I remember getting a DVD release after the success of Oldboy but I never got around to seeing it, so I was glad to hear Arrow Video would be upgrading it to Blu-ray. I picked up a copy and my thoughts follow.

* Please note – though I won’t spoil the end of the film, it’s hard to discuss it without revealing plot points that unfold during the first half. So, if you’re particularly sensitive about spoilers, please stop reading now.

The film begins with Swiss Army Major Sophie E. Jean (Lee Young-ae) being brought to the DMZ between South and North Korea to investigate a double killing of two North Korean soldiers on their side of the border. Sergeant Lee Soo-hyeok (Lee Byung-hun) was found injured, crossing the border that night, and has confessed to the crime. However, where the South claim he was kidnapped, forcing him to shoot himself out, the North claim he illegally crossed the border and murdered the soldiers in cold blood.

Jean is working for the Neutral Nations Supervisory Commission to figure out which story, if any, is accurate and what should be done about it. 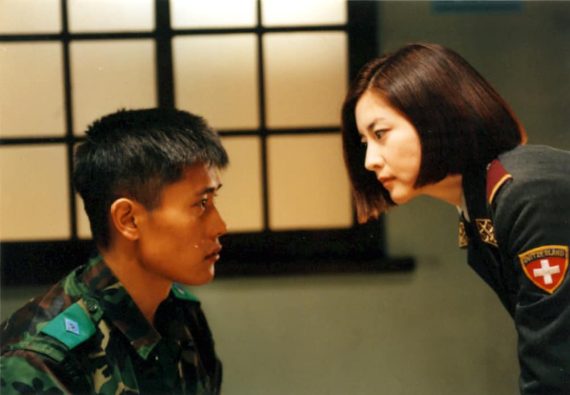 As the film goes on and regularly moves into flashbacks, we discover the truth. I won’t go into exactly what happened in the shootout (though from the start you know who dies, so it’s no big revelation), but basically we learn that Lee befriends the two North Korean guards Sgt. Oh Kyeong-pil (Song Kang-Ho) and Jeong Woo-jin (Shin Ha-kyun) who man the guard post just over the river from where he’s stationed. Lee makes regular covert trips to their hut and the trio become good friends, bringing Private First Class Nam Sung-shik (Kim Tae-woo) into the group too after a short while. This illegal partnership is doomed from the start, but the quartet won’t let politics or the law get in the way of the bond they form.

It must have been quite a brave move to make the film. In some archival interviews included on the disc, it’s claimed it would have been illegal to produce JSA a few years prior, in fact. The great success of the film in South Korea shows how much of a chord it struck with the populace though. Reportedly, South Korea’s President Roh Moo-hyun even gave a copy of the DVD to North Korea’s leader Kim Jong-il during the Korean summit in October 2007, in a bid to ease tensions between the nations. 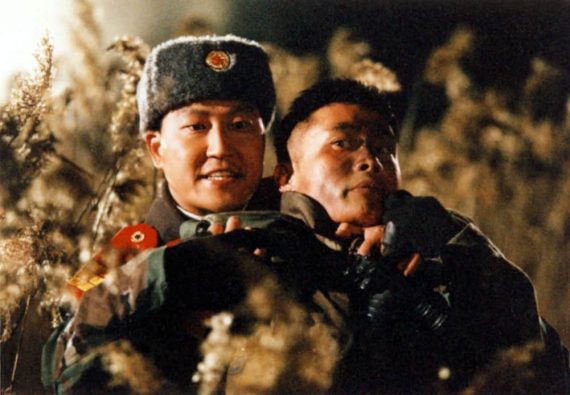 The film did come under fire in some circles in South Korea though, with right-wing figures disgusted at how it portrayed North Koreans as friendly people who could laugh and joke with South Koreans. This reaction shows the depth of hatred between the countries and how important its peaceful message was, and still is, to tell.

I found the way the film examined the division to be fascinating, as I know very little about Korean history and haven’t always paid much thought to how and why it was divided. What I particularly liked was the film’s unusual structure, used to examine the issue. I don’t just mean the heavy use of flashbacks, which aren’t always clearly motivated and make up a large portion of the middle of the film, but in how the film changes scope as it goes on. It begins like a thriller with an epic international scope, but gradually closes in to be an intimate drama between a small handful of people.

These two sides of JSA bring me to one of the problems I had with the film though. I found the character drama between the soldiers to be much more successful than the political thriller that bookends it. The scenes with Jean are fairly generic and the final unveiling of exactly what happened isn’t particularly revelatory. Thankfully, there’s a stunning final shot that helps the film end on a high note, but it is a fairly hit and miss affair overall. 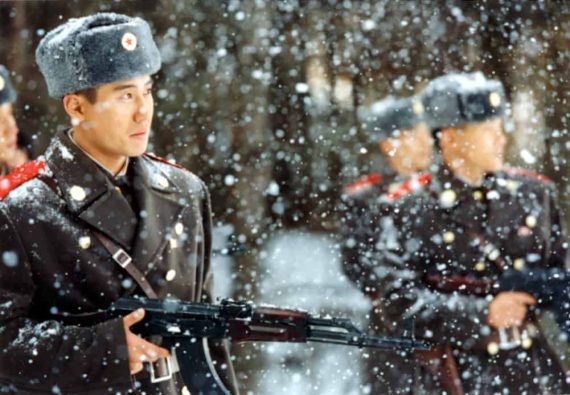 Another reason why it all feels a bit uneven is the fact that a number of the investigation scenes between Jean and her fellow neutral cohorts are delivered in English. None of the actors in these scenes are natively English and neither is the director, so the delivery is pretty poor. It makes these scenes stick out like a sore thumb and causes the otherwise classily produced film to seem a bit third-rate in places.

I found the film to be stylistically a little uneven too. Park is known as a great visual stylist, directing sumptuously shot films that have clearly been meticulously designed. Here, there are quite a few visual flourishes in places but elsewhere it can look a bit bland. I didn’t mind this too much, as at its core the film is a low key character piece, but the problem is that when more unusual techniques are used they’re a little distracting. I particularly wasn’t a fan of the circling camera shots used a few times. They seem to have just been chosen to make the scenes look visually interesting, rather than serve the mood or psychology of the moments. 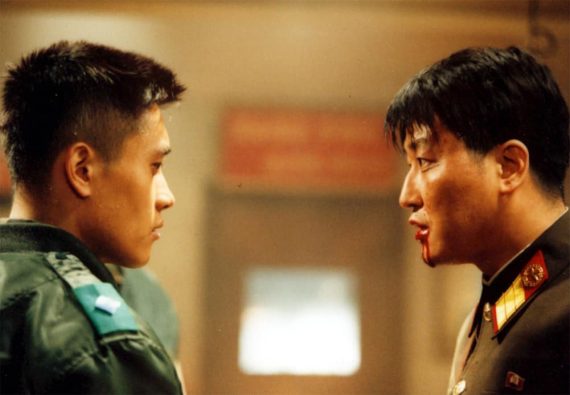 So, JSA is not quite as polished or consistent as Park’s later work but it still has a lot going for it. More than anything else, it has a lot of heart, with a touching story of forbidden friendship across a tragic division unfolding after its fairly routine mystery-thriller set-up. With tragedy counter-acting warmth and humour, it’s one of Park’s more human films, even if it’s not as satisfying overall as a piece of cinema.

JSA – Joint Security Area is out on 18th January on Blu-ray, released by Arrow Video. The picture quality is first-rate, with a sharp but natural look. Audio is strong too.

The commentary is largely analytical, often looking at how the film sits among the rest of the Park’s work. It’s a solid track that’s well worth a listen.

Jasper Sharp’s interview covers how the film is placed in a historical and political context, again looking at how it sits among Park’s oeuvre too and looking at his work as a whole. It’s a fascinating piece.

The rest of the features are archival and offer the thoughts of the cast and crew on the film, as well as providing plenty of behind the scenes footage.

I didn’t get a copy of the booklet to look at, unfortunately. On the whole though, the set is certainly recommended to fans of Chan-wook Park and South Korean cinema.