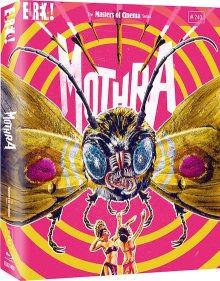 Godzilla, made in 1954, is rightfully considered the granddaddy of the Japanese kaiju eiga (literally ‘strange beast movies’). It launched a genre that would be hugely successful and linger for decades to come, not only in Japan but around the world. However, watching the original film now after all that has come since, it feels like quite a different beast to much of the rest of the Godzilla franchise and others such as Gamera, at least those kaiju produced in the genre’s heyday during the 60s and 70s.

Whereas the original Godzilla was quite a dark and bleak film, set in the real world with an otherworldly threat awakened from atomic testing, most of the later kaiju eiga saw monsters people were aware of or easily accepted showing up in colourful, enjoyable romps. The monsters were often not the villains either, being controlled or at least riled up by evil humans or humanoid aliens.

So, it could be argued that director Ishirô Honda’s Mothra, made in 1961, seven years after he directed Godzilla, is equally as influential in shaping Japan’s kaiju landscape. Godzilla’s immediate follow-ups and cash-ins, such as Godzilla Raids Again and Rodan borrowed largely from their predecessor as well as from Hollywood monster movies. Godzilla’s production itself was inspired by The Beast From 20,000 Fathoms and King Kong. However, Mothra bucked the trend and was very much its own, distinctly Japanese, thing, paving the way for a more family-friendly, all-encompassing entertainment in future kaiju eiga.

The film has certainly stayed in people’s minds, aided by the creature cropping up again in a reboot series (starting with Rebirth of Mothra in 1996) and several entries to the Godzilla franchise (starting with Mothra vs. Godzilla in 1964), as well as appearing in Hollywood’s latest entry to its own kaiju cinematic universe, Godzilla: King of the Monsters in 2019.

With the character fresh in our minds then (also aided by Criterion’s fabulous Godzilla set), Eureka are offering us a Mothra fix by releasing the original film in a strikingly packaged Blu-ray set. I got my hands on a copy and my thoughts follow.

Mothra begins with a ship running aground following a typhoon, leaving some of the remaining crew stranded on Infant Island, a site for Rolisican atomic tests which is believed to be uninhabited. When the survivors are taken home, found to have suffered no ill effects of radiation and claim natives live on the island, a Japanese-Rolisican expedition is sent there to find an explanation.

Once on the island, the expedition comes across a tiny set of twins, dubbed “Shobijin” (translated as ‘small beauties’ and played by twins Yumi Itô and Emi Itô, a.k.a. The Peanuts). Expedition leader Clark Nelson (Jerry Itô) wants to snatch them there and then but the rest of the team, including stowaway reporter Zenichiro Fukuda (Frankie Sakai), talk him out of it, believing the peaceful creatures should be left alone.

However, Nelson goes back to the island after the expedition ends and kidnaps the Shobijin, turning them into a stage attraction, cashing in on their diminutive stature and beautiful but unusual singing voices (The Peanuts were a pop duo). The twins seem to oblige but, unbeknownst to Nelson, the song they sing is actually a call to their protector, the mighty Mothra, who soon sets off on her way to bring them back to Infant Island, destroying everything in her path.

Feeling sorry for the Shobijin, Fukuda, his photographer friend Michi Hanamura (Kyôko Kagawa) and scientist Dr. Shin’ichi Chûjô (Hiroshi Koizumi) attempt to save them and then, when hearing of Mothra’s impending arrival, try to figure out a way to get the Shobijin to her and avoid any more unnecessary carnage.

So, it’s an unusual narrative that’s more fantastical than the original Godzilla. You have the tiny Shobijin, their strange island and its inhabitants, as well as Mothra herself, who’s a strange creation that doesn’t look particularly threatening, other than in her stature. Mothra is also unique in the way she goes through different developmental stages. Beginning as a larva that wriggles through the city, destroying everything it comes across, she then weaves herself a cocoon after climbing up Tokyo Tower. After hibernating for a short while, the full moth-like form of Mothra appears from the cocoon, causing damage through the beating of her mighty wings.

Mothra’s use of music also sets it apart from the crowd. With extended song performances from the Peanuts featuring in the film, it could even be called a musical. This was one of the chief reasons why the usual go-to kaiju soundtrack composer Akira Ifukube didn’t want to get involved in the film. Instead, Yûji Koseki was brought on board. His score isn’t as oppressive and doom-laden as Ifukube’s work, aiding the film’s lighter tone. I particularly love ‘Mothra’s Song’, which is what the Shobijin sing. It’s a beautiful, haunting melody that has been used in other Mothra appearances, even being referenced in the recent Godzilla: King of the Monsters.

A great deal of comedy is also added to the mix, largely coming from star Sakai, who was a popular comic at the time. Also adding to the light tone is the use of colour. Honda and his production design team try to get bold colours into frame whenever possible, leading to a bright and bold film that’s miles away from the monochrome doom and gloom of Godzilla.

And kaiju fans, don’t despair, there is still plenty of city-destroying mayhem too, though this is largely relegated to the final third. As usual, Eiji Tsuburaya and his team of special effects artists deliver some wonderfully detailed destructible sets that his monster makes mincemeat of. The effects aren’t always realistic, but it’s always a pleasure to see so much handmade explosive effects work.

The film isn’t just throwaway fluff either. Like in Godzilla, there are messages to deliver. Though nuclear testing is involved in the setup, the film steers away from this topic as it goes on. In the end, it touches on a number of themes, chiefly corporate greed and exploitation, in the way Nelson snatches the Shobijin from their homeland and uses them to make money. The film later ends on a positive message of unity, with Japan and Rolisica coming together to solve the Mothra problem through peaceful means.

Overall then, it’s a quirkily entertaining riot of colour, music and kaiju carnage. It may not be quite as action-packed as some of Godzilla’s more popular outings or as powerfully bleak as the first, but Mothra has its own unique, bizarre charm that sets it apart from the competition.

* Eureka are also releasing a double bill set of Honda films, The H-Man & Battle in Outer Space on the same day as Mothra. I was sent a screener for that too, but haven’t had the chance to watch and review it. Hopefully, I’ll squeeze it in around the Christmas period but I’ve taken on a heap of reviews as usual around the end of the year, so probably won’t, unfortunately. Eureka’s releases are generally always worth a purchase though, so I wouldn’t wait to take my word on checking them out if you’re a fan of the director and style/era of Japanese film. You can find out more about that release here.

Mothra is out on 16th November on Blu-Ray in the UK, released by Eureka as part of their Masters of Cinema series. The picture looks great. It’s a touch on the soft side perhaps but it has lovely rich colours and pleasingly natural grain. Audio is solid too.

Both commentaries are excellent. I was a big fan of David Kalat’s commentaries on Criterion’s Godzilla set and once again he proves to be a font of all kaiju knowledge and delivers his track with great passion and buoyant energy. Steve Ryfle and Ed Godziszewski are equally as engaging, bouncing off each other nicely and providing plenty of background knowledge about the film. There’s not too much crossover between the two tracks either, thankfully.

Kim Newman is his usual informative and entertaining self. He’s always a pleasure to listen to and describes why he thinks the film stands out among the kaiju crowd.

Eureka’s booklets are always excellent and this one is considerably longer than usual, making it an even more valuable asset to the release than usual.