Last month I had the good fortune to review Masaaki Yuasa’s anime film Ride Your Wave. I was keen to see the film and expected to receive a link to it alone but instead I was introduced to the wonders of the streaming site Screen Anime with a festival pass that gave me access to four films and one series for the duration of a month. Each month, Screen Anime offers up a lovingly curated mini-festival of anime films for subscribers to watch at home, with the categories Hot New Film, Festival Favourite, Festival Classic and Curious Curation ensuring a diverse and satisfying range of films. Given the opportunity to review the next round of films, I naturally jumped at the chance of another festival pass.

Junior high school student Ruka is left with nothing to do during summer vacation after a run in with a girl in her school club gets her thrown out. Not wanting to hang out at home due to her difficult relationship with her mother, Ruka instead heads to the aquarium where he father works. Here, she meets a mysterious pair of teenage brothers named Umi and Sora who were apparently raised by sea mammals and have corresponding aquatic abilities. Ruka discovers that she herself has some kind of connection with the boys by way of a strange series of phenomena affecting the world’s sea life.

The first thing to say about Ayumu Watanabe’s Children of the Sea is that it looks stunning. In a Screen Anime month that is not short of visual invention, Children of the Sea stands out thanks to the fluidity of its characters, the tactile illusion of their aquatic surroundings and their deeply expressive eyes, on which Watanabe often lingers. It’s a visual feast which is a pleasure to look at for its entire two hour runtime. That runtime becomes more problematic when you consider the plot though. As is probably apparent from the above synopsis, there are a lot of big ideas in Children of the Sea and it doesn’t always juggle them adequately. The film was based on a manga by Daisuke Igarashi and, as is sometimes the case with anime films based on more expansive source texts, it has the feel of something that has lost some key elements in the condensing process. It ends up feeling both overlong and too short for the story it wants to tell. There are also some oddly contradictory beats. Maybe it’s just the vegan in me but should a story filled with supposed awe and respect for marine life really feature a sequence in which the protagonists delightedly cook the shit out of a lobster? Ultimately, while I enjoyed drinking in the visuals of Children of the Sea, the story itself felt a bit like drinking in sea water.

Kokone is supposed to be studying for her exams but she keeps succumbing to bouts of napping. While asleep, she dreams she is a princess in Heartland, a fantastical kingdom which revolves around its automotive industry and where giant robots are the obvious solution of attacks from molten metal monsters. In the real world, Kokone’s father is arrested prior to the Tokyo Olympics and accused of stealing secrets from a large car company. As Kokone deals with these various pressures, details of her real life and dream life begin to overlap and help her get to the bottom of some family secrets. 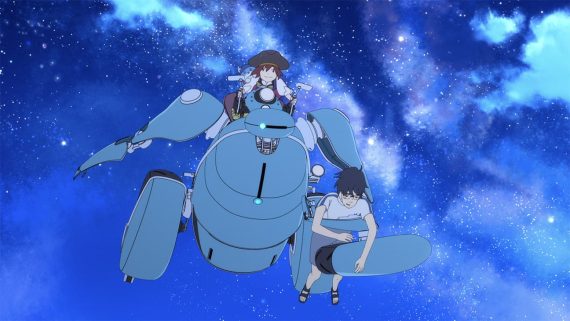 Napping Princess left critics baffled when it originally came out but I enjoyed it quite a bit. Like Children of the Sea, it is overly ambitious in the amount of plot it attempts to cram into a two hour time frame but it juggles its two realities well for a surprising amount of the runtime before the almost inevitable third act madness sets in. By this point, however, Napping Princess has earned our goodwill through its unassuming, good-natured approach. Unlike the grandiose visuals of Children of the Sea, Napping Princess features cheerily simple, if still somewhat attractive, artwork which feels reminiscent of a high budget take on a nostalgic Saturday morning cartoon. Amongst its numerous strange plot points, it is interesting to note that Napping Princess is set a few days before the 2020 Tokyo Olympics, an event which seemed unlikely to be postponed in a pre-Covid world.

Festival Classic – A Letter to Momo

Momo moves with her mother from the hustle and bustle of Tokyo to the quiet, remote island of Shio. Facing what she is sure will be a boring existence and hampered by her shyness in her attempts to make new friends, Momo is further troubled by creepy noises coming from the attic of her new house. Investigating further, she discovers three troublesome goblins called Kawa, Mame and Iwa, with whom she begins to have a series of adventures around the island. 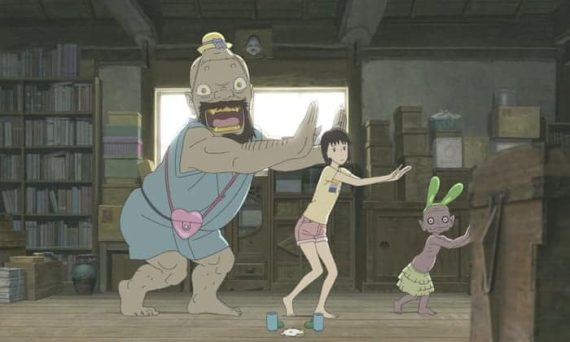 A Letter to Momo features several anime cliches including a reluctant young girl moving house, a deceased parent and a group of supernatural friends, but the film puts its own stamp on material which it is well aware could be a little too familiar if mishandled. Ultimately, A Letter to Momo is an extremely interesting film which transitions between tones very well. The titular letter, for instance, is an unfinished note from Momo’s dead father which she carries around with her, while her mother’s severe asthma also provides a serious, potentially tragic strand, and yet the antics of the three goblins are often unashamedly broad, including numerous fart gags. Writer/Director Hiroyuki Okiura pulls off this mix by making clear that A Letter to Momo is aimed at a slightly younger audience without ever suggesting that this should preclude adults. The three goblins are undoubtedly the film’s trump card (hey look, I can do fart gags too!), their unusual and ickily appealing designs eliciting laughter before they’ve even said anything. A Letter to Momo has a great look to it, eschewing obvious brightness for a more muted, melancholic palette which underscores its deeper themes. Ultimately though, the film does rather overstay its welcome at two hours in length and, while its measured pace sometime works well with the material, there are times when it feels like scenes could have been cut or sped up just a little. However, I feel like on a rewatch this opinion might change as there is an inviting leisureliness to the film that makes me want to watch it again and savour the experience of hanging out in Shio. A Letter to Momo is my top pick from this month’s batch of Screen Anime offerings and I’m looking forward to experiencing its unique charms again soon.

Maquia is a fifteen year old Iorph, a clan of humanoid creatures who stop physically aging in their mid-teens and can live for hundreds of years. Her loneliness in the isolated existence in which the Iorphs live is alleviated after an invasion by the Mesarte army leads to her escape and impulsive adoption of Ariel, a mortal baby she finds in his murdered mother’s arms. Against the advice of the elder from her clan, Maquia begins to love Ariel as her own, even though she knows deep down that he will someday overtake her in age. Are the virtues of motherhood worth the heartbreak of being outlived by your own child? 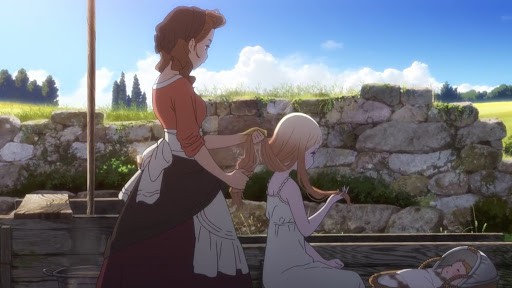 Maquia: When the Promised Flower Blooms appears as Screen Anime’s Curious Creation this month but it is actually the least strange of all the films on offer here. Although it is set in a fantasy kingdom, the story is deeply human and considerably more coherent than any of the other films in this package. Written and directed by prolific anime screenwriter Mari Okada, Maquia is an impressive high fantasy epic with a deeply emotional core. I’m not normally a big fan of epic fantasies and usually find them a little self-serious, but I enjoyed Maquia more than I expected to thanks to its striking visuals, its deeply felt themes and its well written characters. There were a few noodly bits to the world-building but I appreciate that this is the stuff that fans of this genre eat up so it’s probably a better film for having it in there and the engaging story ensured this fantasy-sceptic remained entertained throughout. One element of Maquia that many have found hard to deal with is its sheer emotional heft, with some people finding it manipulative. While it does get a bit much at times, I’d use the word ‘unabashed’ rather than ‘manipulative’, as the emotion never seems insincere even at its most overwrought. In fact, the inevitability of Maquia’s denouement and the fact that the film has the guts to go through with it where mainstream western animation may have copped out make it all the more special.

This month’s festival picks are available now until late September at www.screenanime.com. This month’s Series Marathon is Kiss Him, Not Me. All films are available in both subtitled and English dubbed versions (except Children of the Sea, which is subtitled only) and trailers for all the content are also included. Napping Princess and A Letter to Momo both include bonus making of featurettes. It’s another incredibly generous package for £3.98 and I couldn’t recommend the excellent work Screen Anime is doing more highly.