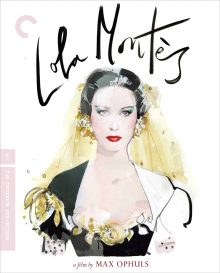 Lola Montès should have been writer/director Max Ophüls’ triumphant swansong (he died partway through making Montparnasse 19 two years later) but on its release the film flopped in its native France. Due to the box office failure of what was the most expensive European film made at the time, the producers swiftly butchered Lola Montès for its extended run around France and the rest of the world, cutting it for length and re-ordering the structure of the story to play out in a bog-standard chronological fashion. This version didn’t fare much better and the film was deemed a failure.

However, improved versions of the film were screened at the New York Film Festival in 1963 and ’68, championed by Andrew Sarris (who has called it “the greatest film of all time”). These helped Lola Montès enjoy greater critical success in later years and this was further bolstered when the rest of the lost footage was found and the film was restored to its correct Cinemascope aspect ratio in 2008. It’s now considered one of Ophüls’ finest works.

I’ve been impressed by the couple of Ophüls films I’ve seen (Le Plaisir and The Reckless Moment) so I was keen to delve deeper into his filmography. Criterion’s forthcoming release of Lola Montès on Blu-ray in the UK was a perfect excuse for me to do so.

Lola Montès is Ophüls’ spin on the tale of the real-life 19th Century celebrity Eliza Rosanna Gilbert, better known as Lola Montez (played by Martine Carol). In the film, the story is framed around her performing in an elaborate circus stage show version of her life, headed by an impresario/ringmaster played by Peter Ustinov. The performance causes Lola to reminisce on her life, which is shown to us through flashbacks.

And what a life she led. Though a dancer was her main profession, she was famous for her scandalous affairs. The circus show boasts that she holds the world record for number of lovers. Her relationships are shown to have started with her briefly marrying her mother’s boyfriend, Lt. Thomas James (Ivan Desny), having relationships with luminaries such as Franz Liszt (Will Quadflieg), a notoriously public break-up with conductor Claudio Pirotto (Claude Pinoteau) and finally an affair with the Bavarian King Ludwig I (Anton Walbrook). The latter is suggested to have lead to the March Revolution of 1848 and seems to have been the final straw for Lola too, leading her to join the circus, a shell of her former self.

The circus storyline may have been completely fictional but it serves the film well in many ways. On a basic level it’s a simplified representation of the last decade of Lola’s real life, when she made a career of exploiting her fame. It also helps more effectively weave the stories together as a cohesive whole. I can’t imagine the narrative of the chronological re-edit of the film working nearly as well.

What is most impressive about the circus frame of the film though is that it acts as a metaphor for further layers of meaning. For one, it provides a post-modern view of the film itself with the ringmaster representing Ophüls himself, conducting a lavish ‘highlight reel’ of Lola’s life. It also works as making a statement about the exploitation of women in art and entertainment then and now. There’s a particularly strong indictment of such treatment when the audience at the circus yell out deeply personal questions to Lola, that she’s expected to answer. When she refuses, the ringmaster does it for her.

These segments of the film are extravagantly staged, pitched somewhere between lurid and beautiful. Colours are bold, the production design is lavish (largely the reason it was so expensive) and the frames are filled with extras and movement.

This being Ophüls, the camera is also rarely still. Throughout the film, he conducts complex dolly and crane shots, always adding depth to his compositions through foreground objects or frames to ensure the camera movement achieves maximum impact. Motion is also cleverly used to reflect Lola’s restlessness in her earlier years then contrast this with the world moving around her after her spark has gone in later years. We frequently see her fixed in the centre of the ring whilst the camera and circus spin around her in a dizzying fashion.

However, despite being impressed by Ophüls’ craft, I didn’t fall for Lola Montès as I did Le Plaisir and The Reckless Moment. With the film consisting of a number of flashbacks, jumping between different love interests and narrative strands, I found I never got a chance to feel deeply involved with any of the relationships portrayed in the film. Carol never quite won me over as Lola either, as I found the character a little too distant to fall for. The final shot is perfect and poignant, but for the most part, I was emotionally disconnected from the film.

So, it’s a beautifully presented and gracefully shot film, offering an interesting view of a curious figure in history, as well as that of women in the public eye in general. However, the story and characters left me rather cold. I never felt like I got to dig deep into Lola’s heart. In this way, the film felt a little like the circus framing the story – all flash and no soul.

Lola Montès is out on 11th May on Blu-Ray in the UK, released by The Criterion Collection. The restored picture is gorgeous. The colours are rich and the picture free of damage. I noticed one particularly soft shot, but this might have been one excised from previous cuts or an issue with the original footage. The audio is excellent too.

The commentary is particularly good. It’s dense with analysis and background information on the production, though she often resorts to describing what’s happening on screen which is a little unnecessary, though it’s useful if you’re listening and not watching carefully.

The archive TV programme is an affectionate tribute to Ophüls, if a little shallow. The ‘Max by Marcel’ piece treads some similar ground and anecdotes and even includes clips from the archive programme, but it has a little more insight into the production, despite its shorter length.