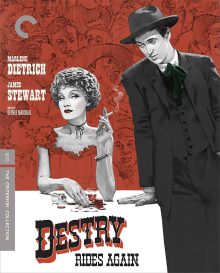 1939 is often considered Hollywood’s greatest year and you can build a strong case for this argument by going, as so many do, directly to the Best Picture Oscar nominees of that year. From the beautiful if deeply problematic juggernaut Gone with the Wind to the political idealism of Mr. Smith Goes to Washington, the sophisticated comedy of Ninotchka to the evergreen (or emerald) fantasy of The Wizard of Oz, many of the most famous films of all time are here. But of course, the Academy’s picks are never the be-all-and-end-all and looking outside of these Oscar-garlanded classics reveals a richer, fuller picture of the films favoured by 1939 audiences. These are the lesser-nominated genres: rip-roaring adventures like Only Angels Have Wings and Gunga Din, swashbucklers like The Man in the Iron Mask, horrors like Son of Frankenstein, even an early animated feature in the Fleischer Brothers’ take on Gulliver’s Travels. And then there are the westerns. Though the Academy have recognised more westerns in the Best Picture category than some sources would have you believe, the genre was often swept aside as an entertainment for the masses and rarely ended up on the winner’s podium. 1939 was an excellent year for westerns, with John Ford’s Stagecoach being recognised by the Academy as one of the finest examples of the genre, and the likes of Jesse James and Dodge City packing them in at the box office. But one in particular has endured on the fringes of the more critically-lauded cowboy classics, remembered by many as among the most reliably entertaining westerns ever made. This is George Marshall’s Destry Rides Again.

Before we get into specifics about this terrific western, it’s worth noting the rather confusing history of its title. The name Destry Rides Again seems to suggest a sequel, implying Destry has ridden before and indeed George Marshall did direct a film called Destry… 15 years after Destry Rides Again. Destry was in fact a remake of Destry Rides Again, so Destry actually rode again before he rode in the first place. To make matters worse, Benjamin Stoloff directed a film also called Destry Rides Again in 1932. So seven years before Destry rode again before he rode 15 years later… he rode again for the first time. Still following? Not to worry, there’s nothing quite so complex to get to grips with in the films itself. Destry Rides Again is a brilliantly fun comic western packed with event (How the West Was Fun, you might call it!). It boasts laughs, thrills, suspense, drama and even a couple of musical numbers among its numerous attractions. The film begins with the classic set-up of a couple of heels holding a whole town in their power, colluding to get the town drunk appointed as sheriff on the assumption he will be easy to control. Instead, the new sheriff immediately renounces the bottle and calls on the son of legendary lawman and old friend Tom Destry to help him clean up the town. But Destry isn’t quite what anyone is expecting. Can this unconventional hero save the town and help saloon girl Frenchy extricate herself from the criminal life she has fallen into? 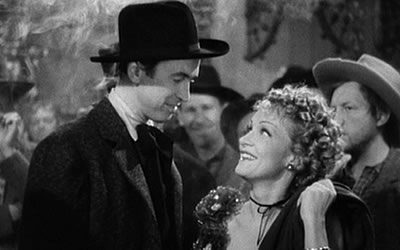 One of the chief attractions of Destry Rides Again is its cast. When James Stewart took on this role he was not known for westerns, having only a couple of minor ones under his belt, and after Destry Rides Again he would not return to the genre for over a decade. When he did, he usually played neurotic cowboys seeking vengeance, riding under a cloud of dark secrets and repressed guilt and fury, most notably in the string of superb westerns he made with director Anthony Mann. There’s an interesting parallel between Destry Rides Again and Winchester 73, the first western Stewart made with Mann. In the latter, Stewart’s character is sent a glass of milk as an insult by another saloon patron, an act which nearly leads to a barroom brawl. In Destry Rides Again, the same offer is made in the same mean spirit to Destry but instead of getting angry, he gladly accepts the milk and drinks it down. The key to this difference in approach lies in another parallel. We are told early on in Destry Rides Again that Destry’s full name is Thomas Jefferson Destry. This patriotic middle name is something he shares with another hero Stewart played that same year, Jefferson Smith in Frank Capra’s Mr. Smith Goes to Washington. This particular parallel betrays the fact that Destry is less one of Stewart’s cowboy roles and more one of his humble small town hero characters. Refusing to carry guns, spouting folksy wisdom and, yes, even accepting spiteful dairy products, Destry is a Capra-esque protagonist transplanted to a western town. 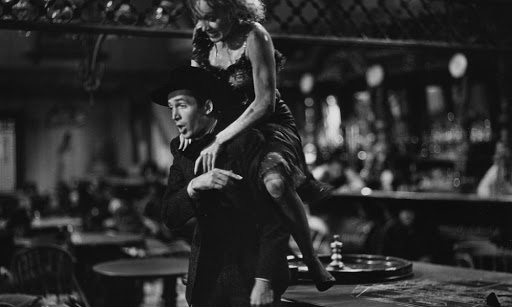 Stewart’s take on Destry is excellent, filled with easy charm and good humour with an occasional dark side rising to the surface, but it isn’t iconic. For that, we must look to the film’s other star Marlene Dietrich whose full-blooded but ultimately rather melancholic turn as dance hall queen Frenchy gives Destry Rides Again its deceptively layered beating heart. While Stewart’s star was very much in the ascendant when the film came out, Dietrich had been suffering a career downturn and found herself on half the salary she had been making since Josef von Sternberg made her a star in the early 30s. But the role of Frenchy rejuvenated her popularity, allowing her to show off her range from deceitful femme fatale to flirty showgirl to a frightened woman in crisis. She performs several rousing musical numbers, most notably the suggestive See What the Boys in the Backroom Will Have, and throws herself ferociously into a couple of invigoratingly chaotic fight scenes that epitomise the infectious energy that makes Destry Rides Again so wonderful. The problematic Madonna/Whore dichotomy that appears in so many westerns is clearly in evidence here but as is so often the case, the film depicts the supposed “whore” character as far more interesting. Irene Hervey’s “Madonna” character Janice barely even registers, despite being deliberately linked to Frenchy by a cut from her mirror image to Janice’s. In following the trope of eventually pushing Destry towards the “good” woman while also making her a complete cipher, Destry Rides Again’s screenplay (significantly co-written by female screenwriter Gertrude Purcell) has the twinkle of something more complex beneath the surface, even as it fulfils the Hays Office required clichés. 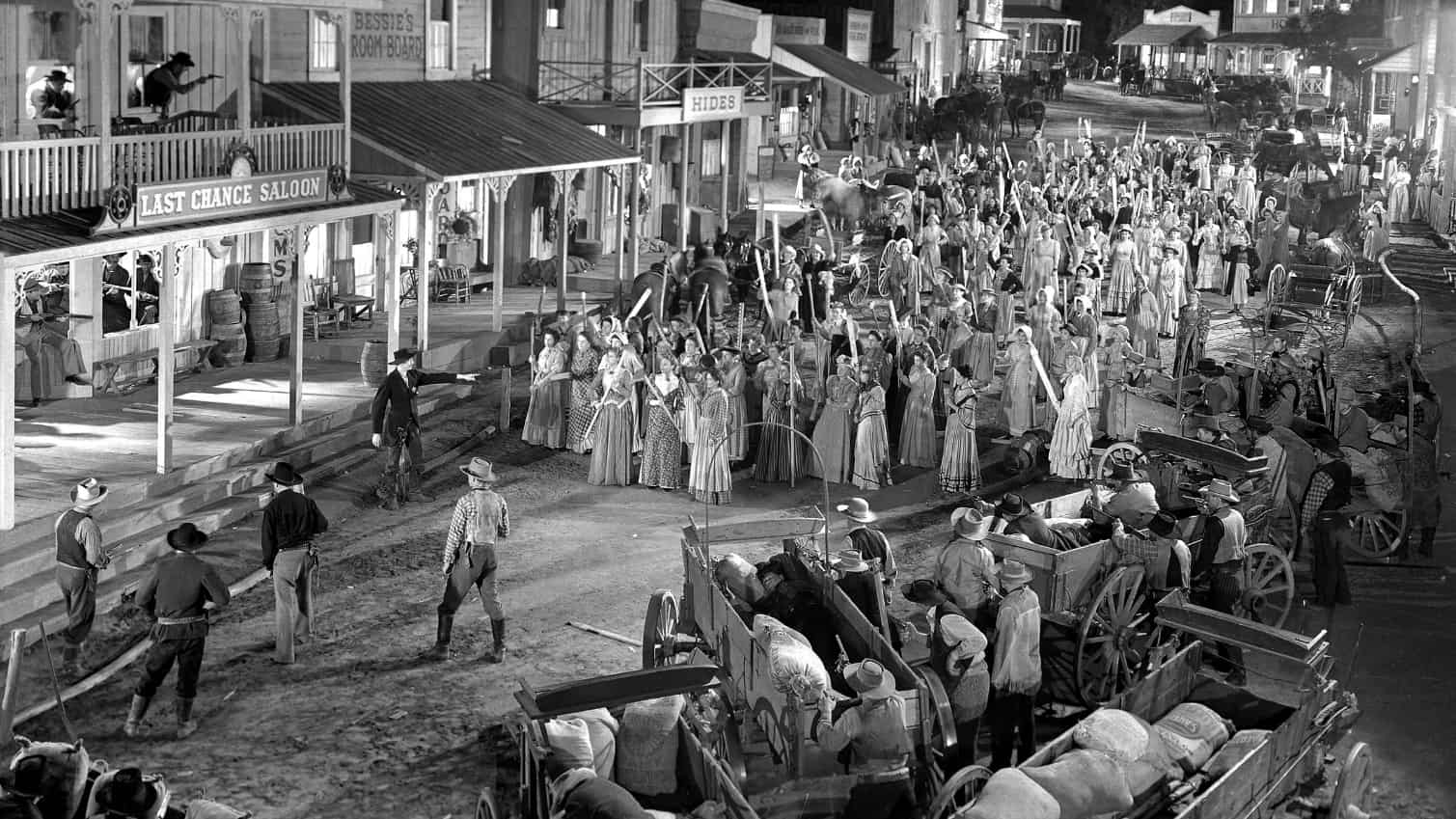 When placed alongside the classic films mentioned at the top of this review, Destry Rides Again feels like a significantly different beast. In many ways it seems a film out of time, with some goofy gags and broad performances like Billy Gilbert’s wild-eyed bartender seeming to come from a much earlier era. There is a twenty minute set-up before Stewart even arrives on screen and the almost surreal atmosphere Marshall conjures up in this time makes it hard to imagine Stewart stepping into such a film. When he does, of course, it highlights how effective this approach has been as rarely has the arrival of a hero had such an apparent effect on the town he has come to clean up. Destry Rides Again’s lower budget is also apparent at first in how studio-bound the film’s town shots look. Fortunately, a great deal of the film takes place in the saloon and the brilliance of this large set is made apparently almost immediately in a glorious overhead shot as villain Brian Donlevy walks out on the upper floor of the bar and surveys his kingdom from above. Like the strangeness of the old-style gags, the artifice of Destry Rides Again’s subsequent stagecoach arrival sequence is quickly subsumed into its overall milieu. The film seems to take place in its own skewed reality and if wild-takes, oddball characters and hand-shunted vehicles on sound-stages are part of that then all the better. Amidst all the merriment, the way Marshall enthusiastically embraces these clashes effectively foreshadows the shadier character moments such as the genuinely unsettling moment when Destry smears Frenchy’s lipstick. 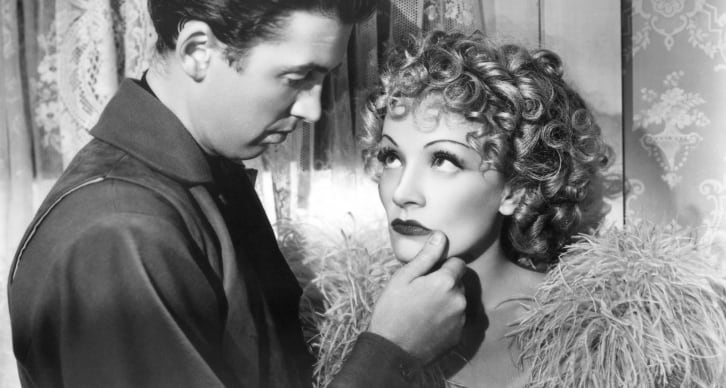 Destry Rides Again was received well enough by audiences and critics alike, though it was never destined to trouble the Academy voters. This disconnect from popular prestige has largely kept the film on the outskirts of classic film discussions, although Dietrich’s iconic Frenchy at least has popped her head into some such debates. The film has never quite fallen into obscurity per se and is occasionally even given TV airings but its light-hearted tone is often taken as trivial by those who fail to spot the film’s dark underbelly. Even disregarding those muted notes of despair, Destry Rides Again is clearly a classic from the get-go. It moves forward at such a pace and with such confidence in its scrappy charms that enjoyment is all but guaranteed for those willing to play its particular game. While it is unlikely to scale the heights of popular acclaim John Ford’s westerns have recently been afforded, perhaps this wonderful new Criterion release of Destry Rides Again will help nudge it into the consciousness of a few more would-be fans who will be receptive to its excellence.

Destry Rides Again is released on Blu-ray by Criterion on 18 May 2020. Special features are as follows: