80s genre connoisseur Nico Mastorakis made an infamous mark when he burst on the scene with the nasty exploitation flick Island of Death. He then seemed to use its notoriety and moderate success to segue into prolific genre filmmaking through the 80s and 90s. Founding his own company, Omega Entertainment,  and often using his home country of Greece to set many of his films, Mastorakis churned out video store action favourites such as The Zero Boys, Nightmare at Noon and Hired to Kill. Before these he dabbled in the Giallo/slasher genre with the likes of Blind Date, Blood Tide and this fun little flick, The Wind. 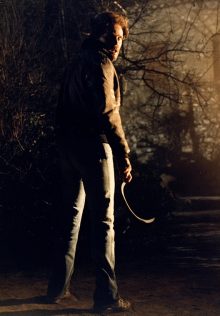 Also known as Edge of Terror (which is probably a better title), The Wind sees famous mystery writer Sian Anderson (Foster) heading to a small Greek island to write her next novel. No sooner has she arrived she’s warned by the eccentric (and not very PC!) landlord (Morely) of the villa she’s renting about the dangers of the strong winds the island experiences and to stay clear of his slightly unstable and possibly murderous handyman, Phil (Hauser, who else!?).  And again, no sooner has Sian been made aware of all this, than the wind strikes up, Phil goes complete bat-shit, offs the landlord and starts playing a game of slasher cat-and-mouse with the now trapped inside-her-villa Sian.

The Wind has a simple set-up, wastes little in time putting our heroine in jeopardy and for just under 90 minutes delivers just enough stalk and slash fun. It’s no spoiler that Hauser is the killer (and Morley pretty much admits it as soon as he mentions him!) so there is little mystery to who the killer is but there is still plenty of fun to be had as he hunts Foster in and around her villa. It’s a pity that with a title like The Wind there isn’t actually an evil wind that causes people to go mad or brings about vengeful demons (ala The Fog) but rather it’s just a convenient crux to keep the lead trapped in the villa and on the island with a madman. There’s not a great deal of surprise on offer and it’s just your typical bonkers killer hunts lone victim scenario but Mastorakis wrings enough tension and creative set-pieces out of the set-up to deliver a low-key but atmospheric slasher. 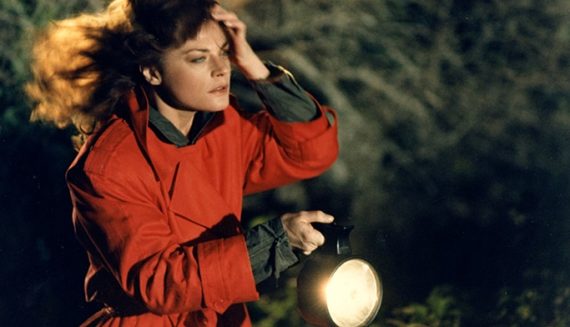 The Greek island setting provides a novel and picturesque backdrop, adds to the gothic vibe (along with plenty of wind machines and back-lighting!), Hauser is his usual unhinged self (be disappointing if he was anything but!), there are a few nasty kills courtesy of a giant blade and Foster is great as the resourceful lead. Roger Morley adds a little eccentricity in his few scenes and there a cool cameos by genre stalwarts Steve Railsback and David McCallum (who looks like he may have just been collecting a paycheque!). It never drags, Mastorakis does manage to conjure a cool Gialla/gothic vibe out of the single location, and there is even a funky cool early score composed (in part) by everyone’s favourite composer Hans Zimmer (available in full as an extra with this release: cool!), which all add to the retro 80s horror fun.

It’s maybe a bit slight and tame, and Mastorakis has made better films but The Wind is a fun oddity given a welcome polish and release and a great chance to see the much-underappreciated Meg Foster in a lead role.

The Wind is released on Blu Ray from Arrow Video on 13th April 2020.

Extras were not available at the time of review, but Arrow has packed the disc out with an assortment of cool sounding extras including: