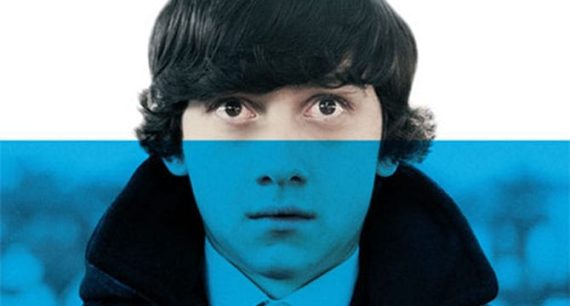 Last week, having gone on for quite a bit about the war, I ended up in a pretty maudlin mood. So this week, I went to cheer myself up by watching Richard Ayoade’s debut “Submarine.” All in all, I left the film feeling disappointed and underwhelmed. I actually did think it was interesting and well-executed as a piece of work, particularly striking as a debut film. Ayoade’s direction is inherently cinematic, boasting a vast arsenal of camera techniques and some cultured and selective film references, which when combined facilitate a visually arresting and rich experience. A lot of critics are comparing the film, unfavourably, to Wes Anderson (something I can’t comment on with much authority as I don’t particularly like the self-conscious whimsy of Anderson), but what was more resonant to me when watching the film was Ayoade’s stylistic debts to Nouvelle Vague and Ingmar Bergman: and as far as inspirations go, these directors aren’t half bad. What disappointed me about the film, however, was not its impressive visual palette, but rather the fact that it wasn’t hugely funny. Perhaps it isn’t meant to be, but to be honest any British comedy these days can’t afford to not be funny, because it has a damn hard climate to keep up with.

This is all getting at my belief that the tides of British and American comedy in film and television have, in the last decade or so, experienced a massive turnaround. British television comedy has always been rated as the best in the world, and it’s easy to see why when you consider just how completely we’ve dominated the two major comedy formats in the medium: the sketch show and the sitcom. “Monty Python’s Flying Circus” has single-handedly come to define the former of these formats, and Americans revere the series possibly even more than the British do. The only American response has been the long-running “Saturday Night Live,” which is consistently a mixed bag to say the least in terms of the success of its material. It’s also a series generally seen as a Launchpad for its writers and performers to go on to bigger and better things (Belushi to “Animal House,” Ferrell to “Anchorman,” Fey to “30 Rock”), whereas the Python team wanted that specific show to be their attempt at changing the landscape of British comedy and pushing their talents as far as they could go. What’s more, regarding wider trends of sketch comedy, is that Python came in an era which also included “That Was The Week That Was” and “Not Only, But Also,” and in the decades that followed the format evolved further in the shape of hit series’ from “Not The Nine O Clock News” to “Spitting Image.”

Similarly, British sitcoms have always to me been far superior to those of our American cousins; though to be fair it all depends in what kind of comedy you like. With a few notable exceptions, chiefly “Curb Your Enthusiasm,” American sitcoms don’t adhere to the meaning of the phrase: namely that the comedy comes from the situation, hence the intricately plotted farces of “Fawlty Towers” and the variously absurd and utterly recognisable settings of, say, “Father Ted” and “The Office.” American sitcoms are far more concerned with the characters, which certainly reflects how many more episodes an American series has to contain: it’s far easier to develop characters across time than constantly think up new comic circumstances. So, for example, in “Frasier” or “Friends” laughs derive from witty lines said by witty people, not from their ridiculous surroundings, and whilst some people may prefer the added dramatic element possible in this formula in general it doesn’t provoke you into laughing as much, or as hard. And if you think our way of doing things doesn’t lend itself to dramatic impact, let’s take a moment to remember the last episode of “Blackadder.”

But of late, the tide has turned, and British television comedy simply isn’t very good any more. Sketch shows have become laborious and repetitive, reliant on recurring characters and catch-phrases rather than a stream of innovative ideas; and sitcoms have struggled to match the kind of naturalism and removal from a studio-audience format pioneered by Ricky Gervais’ work. American sitcoms haven’t improved, but they have carried on doing what they always did well in the first place, whereas we have not.

The tide has turned in our comedic favour, however, in the cinema. The term “British film comedy” still conjures up images of the wonderful but hardly contemporary Ealing Comedies or the Carry On series, and despite the work done by some notable ex-Pythons our cinematic comedies tended to be a bit too culturally specific, emphasising our Britishness and hence our oddness and penchant for plucky underdogs. The term “American film comedy” is much more resonant of the Marx Brothers, Mel Brooks, Woody Allen and those laugh-a-second spoofs from Jim Abrahams and Jerry Zucker. However your sense of humour tends, it’s a legacy which seems much richer and more diverse than our own. Yet in the past few years, American comedy has become a bit too dominated by star-performers who often don’t deliver the goods: Stiller has yet to top his early films, Ferrell is consistently irritating, and does anyone seriously find Adam Sandler amusing? The best comedies, meanwhile, have been grown a little closer to home.

It all started with the Simon Pegg/Nick Frost collaborations “Shaun of the Dead” and “Hot Fuzz.” Having completed work on “Spaced,” incidentally one of the last good sitcoms on British television, the duo took on film comedy, and did something with it that maintained our cultural identity whilst making the affair far more cinematic. The films are rich in cinema influences and references, something Ayoade’s film has similarly capitalised upon, and the end product is subsequently not a long version of a TV show but, in both cases, a proper film which happens to have a barrage of brilliant jokes thrown in. The duo also both bring a strong sense of cinema to the proceedings: Edgar Wright is a hugely talented visual filmmaker who is only going to become more revered as time passes, whilst Pegg is the best straight man in the business. He can make you laugh, but he’s a good enough dramatic actor that he can effortlessly carry a blockbuster narrative on his shoulders, equally convincing as Zombie attack survivor and hardened urban cop.

If Wright and Pegg took the standard British comedy film and made it truly cinematic, Sacha Baron Cohen, with “Borat” and “Bruno,” took the idea of cinematic narrative and kicked it into another gear. With “Borat,” the episodic structure of the mock documentary combined with how Cohen skilfully utilises his character to manipulate people into a false sense of security in which they reveal their true, often deeply flawed and prejudiced, natures. It’s a smart move, as people who are genuinely what we would consider to be morally upright come across in the film as such, and our laughter is at Borat’s buffoonery rather than at then. Our laughter is directed right at Baron Cohen’s victims when they say that homosexuals should be hanged, or when they’re on a road trip and demonstrate themselves with pretty much every word they say to be massive sexists. “Bruno” does the same thing to an extent, but the film has always in my opinion been more about how far Baron Cohen can take the art of performance. In the film, he simulates an incredibly graphic sexual act in front of a psychic, attempt to seduce a major political figure, calls Bin Laden a “dirty wizard” to a terrorist’s face, and narrowly avoids injury in a wrestling ring when an enraged fan hurls a chair into the cage. It’s not a performance so much as a gauntlet thrown to every other comic actor working in cinema, daring them to go as far as he has gone.

One of the best films of last year was “Four Lions.” Chris Morris’ quite stunning film at times had me gasping for breath: the jokes were consistently edgy but hilarious, the situations were phenomenally well-crafted, and the characters were hysterically funny, especially Nigel Lindsay’s misguided Muslim convert and Kayvan Novak as one of the great dimwits of British cinema. It’s one of the funniest films of recent years, with an exceptionally generous amount of killer lines and belly laughs, yet it profoundly cuts to the core of the idiocy of terrorism. This is shown in utterly ludicrous moments such as Lindsay punching his own face and two of the unlikely lads making a major hash of terrorism school, yet the film achieves a considerable level of depth and diplomacy. Riz Ahmed tries to explain to his son about what he’s doing in terms of “The Lion King” only for the child to find the flaw in his argument, and the characters ultimately die in increasingly absurd, futile, comic and poignant circumstances: right before Novak explodes he tells the police, who have just shot a civilian, “I don’t know what I’m doing.”

British comedy cinema is currently undergoing a major renaissance, and it’s a shame films like “Four Lions” don’t stand more of a chance of success in America, and that people like Pegg and Frost are in the process of selling out to the juggernaut across the water. Nonetheless, we’re creating a real legacy, and its one to which Ayoade will only join if he tries a bit harder than “Submarine.”