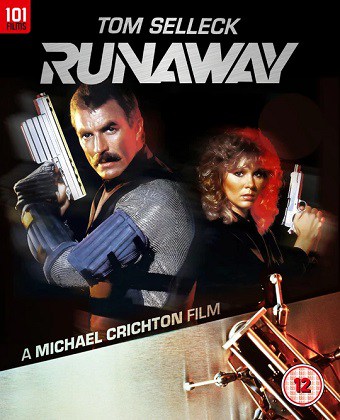 This all but forgotten 1980s sci-fi gem is being given a much-welcomed Blu Ray release and is one of Tom Selleck’s best starring roles as well as one of Michael Crichton’s best directorial efforts. Robots are commonplace and Jack Ramsey (Selleck) heads up a unit of cops who are called in to track down robots that have malfunctioned, which are termed “runaways.” Along with his new partner Thompson (Rhodes), Ramsey is top dog when it comes to tracking rogue bots but he and Thompson find themselves tested when everyday household and maintenance robots start killing people. It seems said bots have been fitted with a new chip which causes them to kill, leading Ramsey and Thompson on a dangerous chase to stop the maniacal Luther (Simmons) and his goal to turn robots into unstoppable killing machines.

Despite some dated looking robots and fashion (yay, the 80s!), Runaway still holds up 36 years later. Crichton’s tight direction and assured handling means this is as much a taut thriller as it is a sci-fi flick. Proceedings and life with robots are handled matter of factor-ly and along with some authentic location shooting (wonderfully lensed by John A. Alonzo), gives the film a lived-in feeling adding a touch of realism. Some of the practical effects may be dated (if this was made today it would be CGI’d/motion captured out the wazoo!!) but again the practical bots add to the real world feel and give a believable impression of what it would be like to live with robots. The film also amazingly predicts some of the tech we all take for granted these days including camera drones, video mail/face timing and tablets among other things, which all adds to the retro tech fun.

Selleck and Rhodes are on great form also with infectious chemistry and a believable rapport that lends weight to the film (despite a de-rigour of the time need for the two to hook up come the end of the film: leading to a very ill advised end credits snogathon!!). The first part of the film features the two of them zipping about between various cases of malfunctioning bots before the thriller aspect kicks in, and to be honest one could have just watched a whole of film of them tracking down gone-haywire-robots while bantering and warming to one another. It’s also refreshing that they’re not cliched antagonistic to one another just because they’re new partners, again adding to the believability of proceedings. Even Gene Simmons’ (in his first big Hollywood role) slightly over-the-top bad guy (and his army of robot spiders: cool!) can’t derail proceedings and he does give good menace and present as a genuine threat to our heroes.

Runaway also, welcomely, has a more measured pace compared to today’s sci-fi actioners, wisely building tension and character rather than constantly trying to dazzle us with shiny CGI tech and spectacle. However, Crichton doesn’t skimp on the set-pieces either giving us exciting sequences including Luther killing people with nifty heat seeking bullet missiles (complete will cool POV bullet tracking sho!), a car chase where remote controlled mini-robots are used to try and blow up Ramsey and Thompson, and a tense sequence where Ramsey’s vertigo comes into play at the top of a hi-rise as he attempts to get hold of his fear all the while battling Luther’s acid spitting spider-bots.

Runaway is a great film that deserves re-appreciating as it offers tense thrills, cool tech and likable characters. And thanks to 101 Films new clean-up/restoration looks fantastic on Blu ray. Check it out!

Runaway is released in the UK on Blu Ray from 101 Films March 2nd, 2020. Special features include a brand-new commentary with film critic Kevin Lyons.