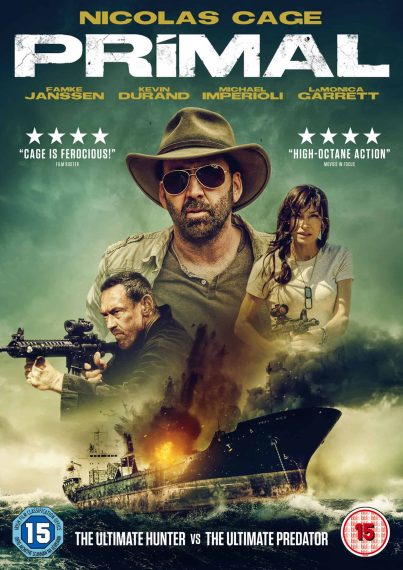 The Nic Cage B-movie conveyor belt trundles on, now churning them out at an alarming rate. Barely five minutes since we’ve had the likes of Looking Glass, Between Worlds, 211, A Score to Settle (yep, seen them all!)  we now have Primal. Much like the aforementioned flicks and, well, all the recent films Cage fits in between the likes of the more loved and edgier Bad Lieutenant, Mom & Dad, and Mandy, this is another quick cheapie albeit with a killer concept: Cage is a big game hunter stuck on a boat, hunted by his recently captured (but now escaped) rare white jaguar. Sweet.

Well, that’s sort of the concept or at least the concept we’re being sold. Cae does capture a large (CGI) white jaguar, in the cool opening scene, and the two are stuck on a boat with the big cat let loose and free to hunt. However, once on the boat the big cat-creature feature vibe is all but jettisoned in favour of Kevin Durand’s psycho assassin (who is also being transported on said boat) getting loose and hunting Cage and the motley crew instead. The jaguar disappears for huge chunks of the running time so Cage and Durand can out-ham each other in the-who-is-crazier stakes!  What could have been a balls-out Cage vs. a giant-jaguar action movie is just your run-of-the-mill stalk and slash killer on the loose flick, but on a boat with a few bits of action. 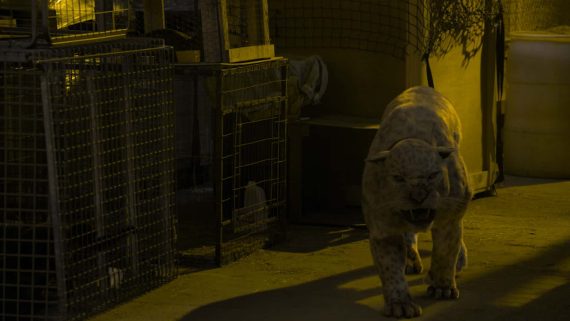 However, while the man-vs-beast concept is wasted, Primal still manages to be a neat little B-movie. It’s barmy as all get up but slickly produced and the cast, certainly Cage and Durand, seem to be having fun and while the big cat doesn’t get much action there’s plenty of knife fights, gun-battles and fisticuffs to fill up the 90 minute running time. Primal has a distinctly (and welcome) 1990s vibe to it and if this had been produced in that decade with Cage and more money thrown at it, it would have been a big release with loads more Cage vs. big cat action. He should have made this right after Con Air! As it is, it’s a fun little B-schlocker with Cage dialled down to around 6 and should keep one tied-over until his next festival lauded, indie cult hit arrives (that’ll be Color Out of Space then!) that sees him dialled all the way up to 11!

Primal is released from LionsGate Entertainment in the UK on Digital Download from February 10th and on DVD February 17th. No extra features were included on the disc.