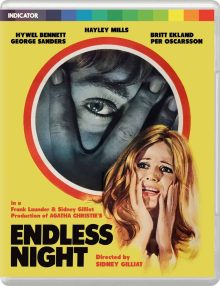 At the beginning of Endless Night, you would be forgiven for thinking that you had landed slap-bang in the middle of an Alfred Hitchcock film. This little-known 1972 British supernatural thriller, directed and scripted by Sidney Gilliat and based upon the novel by the grande dame of murder mystery writing, Agatha Christie, is awash with references to the Master of Suspense which include supernatural imagery such as a watching eye (a riff on Saul Bass’s famously hypnotic opening titles for Vertigo, surely?) and an appropriately suspenseful score by composer, Bernard Herrmann, which immediately recalls his score for the same Hitchcock film.

Endless Night tells of the union of two people from very different backgrounds.  Michael Rogers (Hywel Bennett) is a 20-something jobbing jack-of-all-trades who, while out in the countryside indulging his amateur photography hobby, catches sight of young, American free spirit, Ellie Thomsen (Hayley Mills) who, it transpires, is one of the richest girls in the world. During their brief courtship, by quirk of fate, Ellie, on her birthday, inherits Gypsy’s Acre, a piece of land on which the aspirational Michael has had his eye. Promptly following their marriage, they move into an ultra-modern home (designed by Santonix, an enigmatic figure played by Swedish actor, Per Oscarsson) which has been built upon Gypsy’s acre and which features such impressive features as a movable floor (which conceals a swimming pool) and revolving walls, whose adornments reflect different moods and settings. The mise-en-scène reminded me of something famed Production Designer, Ken Adam, would have designed for a villain’s pad in a Sean Connery or Roger Moore-era James Bond film, albeit on a much bigger scale. (In reality, the house was designed by Wilfrid Shingleton). 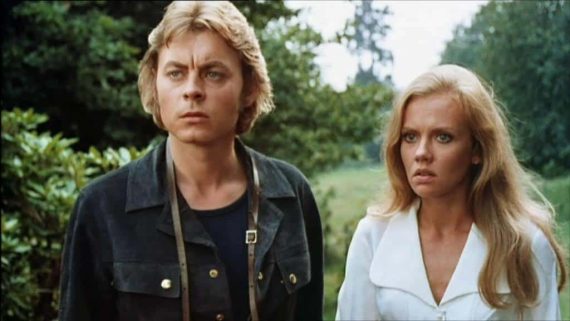 All of this would seem idyllic if it weren’t for the fact that Michael and Ellie’s plans as newlyweds are constantly frustrated by her greedy, snobbish, and intrusive family and friends. By coincidence, among these are Cora and Greta (played by Lois Maxwell and Britt Ekland respectively, who starred in the James Bond film, The Man With The Golden Gun (1974)). Michael and Ellie’s new life together is also beset by other bizarre happenings which include someone throwing a rock at the house’s state-of-the-art exterior, and the unwelcome appearances of a voyeuristic, cantankerous gypsy woman called Miss Townsend (Patience Collier) who, rather humorously, reminded me of Emma Thompson’s children’s film character, Nanny McPhee, minus the etiquette. In classic mystery film fashion, the local Innkeeper (Robert Keegan) fills the protagonist, Bennett, in on Miss Townsend who, it transpires, is something of a local nuisance and someone with a disgraced reputation which connects her to the family who previously inhabited Gypsy Acre. 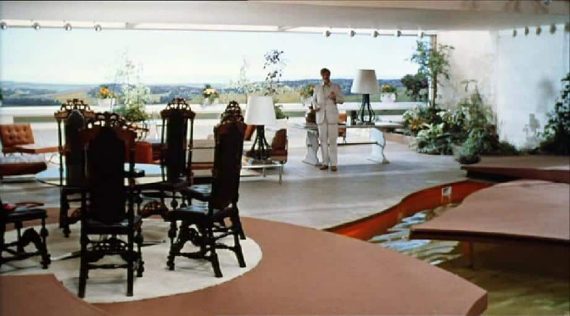 However, the strange happenings come to a head with the unexplained death of Ellie while she is out riding her horse, leaving a distressed Michael to pick up the broken pieces and make sense of the recent occult happenings… Endless Night is an interesting specimen and, for sure, a great slice of nostalgic 1970s film entertainment featuring the cream of the crop of British acting talent at that time (other familiar faces include the smooth-voiced George Sanders, in one of his last roles, and the typically boisterous Windsor Davies (It Ain’t Half Hot Mum). The film does deal in places rather ham-fistedly with the Hitchcock references and, Herrmann’s aforementioned score, while expectedly great, does at times seem a little too self-referential. Perhaps in his later years in London, his creativity was waning and perhaps this score could be indicative of Herrmann lamenting the loss of the great creative relationship that he and Hitchcock once had. One other thing to note is that, in the late 60s and 70s, Hayley Mills was trying to shake off the squeaky-clean image that she had conjured in the Disney films which made her a household name. However, this image comes back with a vengeance in this film as she plays a naïve rich girl who seems oblivious to her monetary power. And, FYI, it was a mistake for her to have even attempted an American accent (which to me, again ironically, is almost a parody of Tippi Hedren in Hitchcock’s Marnie…). 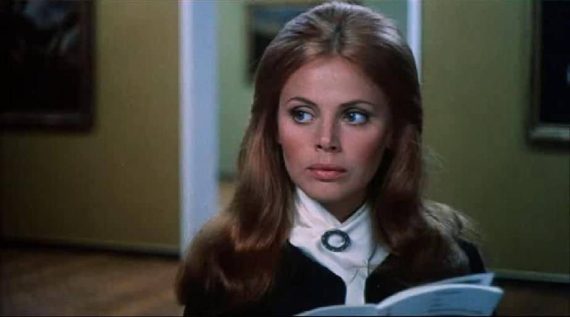 Powerhouse Films Ltd. will premiere release Endless Night as part of its Indicator series on Blu-ray on 24th February (limited to 3,000 copies), which comprises the wonderful new 4K remaster by StudioCanal (complete with a restored original monoaural soundtrack), and a nice selection of extra features, which are detailed below:

The disc features come as a revelation given the rarity of the film itself, and are complemented nicely by the written features of the accompanying booklet. Regarding the former, of particular interest was the recently recorded interview with Hayley Mills as she reflects on her time making the film, detailing her working relationships with her co-stars, in particular the late Hywel Bennett.