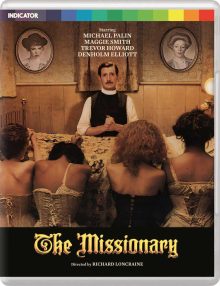 By 1981, Michael Palin had enjoyed over a decade of comedy stardom, almost all of it shared with other members of the Monty Python team. As well as the core Monty Python TV show and films, he had made two series of Ripping Yarns with Terry Jones, and co-written and starred in Jabberwocky and Time Bandits with Terry Gilliam. Palin was ready to try something on his own and, thanks to the success of Life of Brian and Time Bandits, he had a company ready to support him: George Harrison’s Handmade Films, which had funded both of them. In an interview recorded for this Indicator edition of The Missionary, Palin recalls that the idea for his first solo feature as writer and star popped into his head while out running: “a missionary coming back from Africa having been liberated by the more relaxed attitude to sex.” It is a very good idea for a film, but it also isn’t quite what The Missionary turned out to be.

After an amusing single-shot prologue, the film does begin with Palin as CW Fortesque, a missionary in Africa who returns home clutching various phallic fertility statues, eager to get on with marrying his fiance, who he hasn’t seen in over a decade. But Palin neither writes or plays Fortesque as particularly liberated; instead he comes across as idealistic and somewhat awkward, even with his fiance (Phoebe Nichols). Rather than Fortesque seeking sexual adventure, it is forced upon him: first when a mysterious lady of means (Maggie Smith) takes a shine to him, and then when his Bishop (Denholm Elliott) orders him to become a sort of missionary in England, helping London’s prostitutes. How Fortesque really feels about any of this is left unclear, leaving a hole in the middle of the film. It’s a shame, because away from the motivations of its central character, The Missionary does many other things very well. 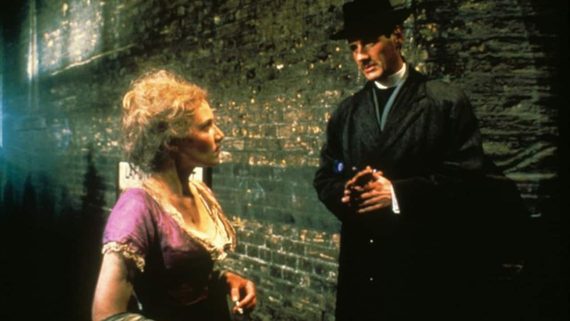 Most obviously, for a modestly budgeted comedy, it looks magnificent. Shot in 2.35:1 ratio, scene after scene is bustling with life and period detail. As well as looking nice, Director Richard Loncraine really knows how to use the wider frame for comic purposes, whether to giving events a sense of scale, or adding bits of background funny business. And the film is very funny. As might be expected given Palin’s background, several scenes play like self-contained sketches, such as when Fortesque talks at length to a potential benefactor, oblivious to the fact the benefactor is dead, or when a butler repeatedly gets lost in a stately home. While Fortesque himself remains opaque until the closing scenes, each supporting character has their own amusing traits: Nichols is obsessed with filing and categorisation; Elliott talks primarily in sporting metaphors; Smith is well-practiced in adultery. For fans of Ripping Yarns in particular, The Missionary is well-worth seeing. It has the same gentle silliness and affection for the highs and lows of British history. But it lacks the clarity of purpose and narrative that would have made it into a wholly successful feature. 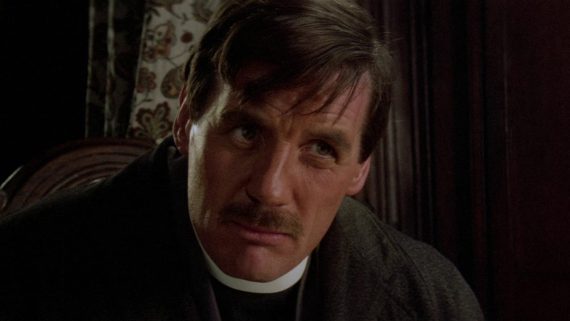 This is another great disc from Indicator. The film has been fully restored from a 4k scan of the original negative, supervised by the director and cinematographer. As noted above, it is a beautiful, highly detailed film, and the finished result fully does it justice. The sound is similarly impressive.

The extra features offer a comprehensive account of The Missionary’s production. There are two commentary tracks: the first with Michael Palin taken from the old DVD, the second a new track with Richard Loncraine. Palin is good company, mixing detailed discussion of individual scenes with more general thoughts on the production and how it fit into his career. The Loncraine track is more of an extended interview, with relatively little scene-specific discussion. He’s also an engaging and bracingly honest speaker. Prior to The Missionary he worked on Brimstone and Treacle and did not get on with Dennis Potter.

As well as the Loncraine Track, Indicator have conducted a series of on-camera interviews with production personnel, all of whom remember the production fondly. Palin and Maggie Smith are cut together into the longest feature, although Smith’s contribution is quite brief. There’s some overlap with Palin’s commentary, but he goes into more detail about what he now feels are the film’s strengths and weaknesses. Costume designer Shuna Harwood, Composer Mike Moran, Make-up Supervisor Kenneth Lintott and Sound Recordist Tony Jackson each has their own segment. Critic and comedian Rob Deering offers a nice 20-minute appreciation of the film.

During the restoration process, two deleted scenes were found, although not their soundtracks. These are presented with subtitles taken from the script and both are amusing. Elsewhere in the extras, Palin explains they were cut for pacing reasons. Finally, there is the theatrical trailer and an image gallery.