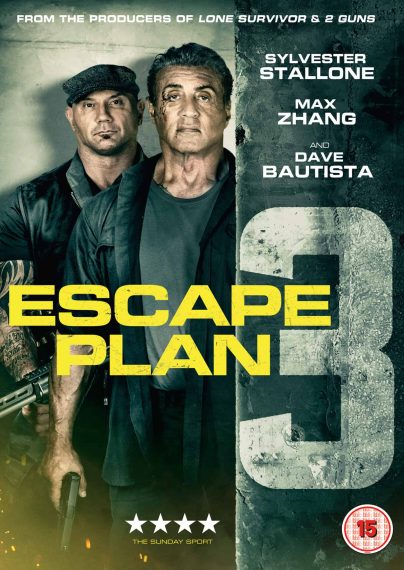 The original Escape Plan was a solid Stallone vehicle nicely mixing the prison thriller genre with some bruising action, which paired the star with another 80s legend in Arnold Schwarzenegger. It was a well produced flick, often inventive in the way its protagonist out-smarted his adversaries and ultimately escaped a high tech prison. A follow up appeared last year, again with Stallone buts sans Schwarzenegger, but the less said about that poorly edited mess the better. Stallone returns once again for a third go around, and while still not as good as the original, Escape Plan 3 is leaps and bounds ahead of Part 2 and a bone crunching action film in its own right.

Ray Breslin (Stallone) still runs his high tech security business but, along with testing the viability of inescapable prisons, his team has moved into the kidnap retrieval business also. Just as well, as he is hired by the mysterious Shen (Zhang) to retrieve the kidnapped daughter of a Hong Kong tech mogul from the bowels of a deep, dark prison known as The Devil’s Station. No sooner as he accepted the mission than one of his own team is also taken and dumped in Devil’s Station as it comes to light the mastermind behind the ‘nappings is none other than the out-for-revenge son of Breslin’s (now dead) former business partner. Breslin must use all his brain and brawn to penetrate the fortified prison, rescue the captives and take out the blinded-by-revenge architect of the whole operation.

While Escape Plan 3 doesn’t quiet have the inventive smarts of the original (this being a much more of a crew goes to rescue hostages and fuck shit up type of action film), it’s got enough going for it to make it a worthy follow up. The hook of Breslin’s former partner’s son out for revenge (Vincent D’Onofrio played his double crossing partner in Escape Plan) nicely ties the film to the original with Devon Sawa (Final Destination) giving good evil as the pissed-off progeny. Thankfully, Stallone is front and centre this time around (he was more of a supporting character in Part 2) sharing lead duties with martial arts maestro Jin Zhang (Ip Man 3). The two get to kick ass in some nicely choreographed fights and Dave Bautista (also returning from his brief appearance in Part 2) gets more to do this time around, including his own wicked fight scene.

Director John Herzfeld (2 Days in the Valley, the underrated 15 Minutes) stages impressive action, mounts the tension nicely and while proceedings are fairly predicable they are no less fun, mainly down to a game cast. It doesn’t quite have the slickness or originality of the first film but Escape Plan 3 is a fun quickie sequel with decent action.

Escape Plan 3 is released by Signature Entertainment in the UK on DVD, Blu-ray, Digital HD and Series Boxset (which includes all 3 films) from 26 August, 2019. Extras include a making of which sees the cast and crew talk about how they shot the film on a very tight schedule (less than 20 days) but worked hard to deliver a much better sequel. Which they did.