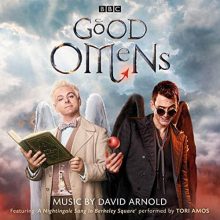 A good soundtrack can fall into one of two categories; something that is perfectly scored to underpin and enhance the images being shown in the film or show the viewer is watching, or something that does just that but is also an experience worth listening to in isolation. While the latter can provide the listener with an evocative experience, recalling favourite moments and visuals, the former can often be frustrating, and it is into this category, for better or worse, that David Arnold’s soundtrack for the Amazon and BBC co-produced miniseries, Good Omens, falls.

Arnold is certainly a well-known name in film scores, having written the soundtrack for five Bond movies, as well as scoring many of Roland Emerich’s films, from Stargate to the much-maligned US adaptation of Godzilla. Probably less well known, however, is his impact on British TV, working on the likes of Little Britain and Sherlock, and it is very much that David Arnold that we get here.

Good Omens the series is an adaptation of the book of the same name, originally published in 1990 and co-written by Neil Gaiman and Terry Pratchett. It tells the story of the angel Aziraphale and the demon Crowley, played respectively by Michael Sheen and David Tennant, two friends since the dawn of man and both somewhat lazy at their respective jobs. The odd couple have managed to find ways to co-exist over the millennia but, when they manage to botch their current assignment to keep an eye on/watch over the anti-christ, they decide to team up to try and prevent the apocalypse.

Arnold brings to the soundtrack a whole smorgasbord of tonal influences from bouncy, gothic Danny Elfman-esque sounds to the crunchy distorted guitars of Queen’s Brian May (with good reason) via some epic biblical sounding organs, and the BBC present that here in a seemingly generous two-disc package comprising of 62 tracks overall. It’s what you’d expect from a good soundtrack and experienced composer like Arnold, full of interconnecting themes and motifs with a good use of repeating passages, but the sheer volume of music on offer means that there’s more filler than killer here, presenting incidental tracks that function more to underscore the narrative than providing an interesting listening experience.

Things kick off well, however, with the opening titles, a jaunty little number that very much sets the motif for the rest of the score. It’s a catchy tune that’ll stick in your head for days and a motif that’s repeated several times throughout the soundtrack including the wonderful End Titles – The Theme That Got Left In The Car, a meta reference to a gag from the book.

You see, Gaiman and Pratchett posit that any cassette tape left in a car long enough will turn into a Best of Queen compilation, and that’s what’s happened to this poor rendition of the theme tune. The wailing guitars that show up here become a recurring theme on the soundtrack, signifying particularly apocalyptic events. 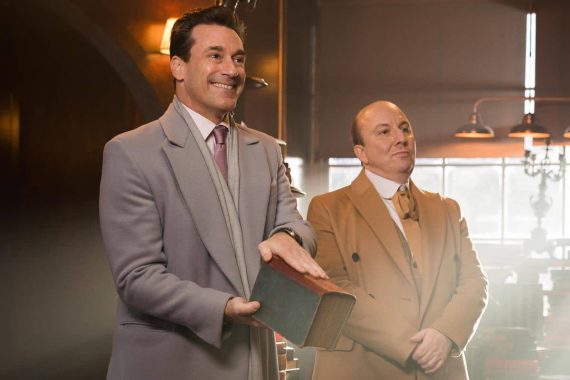 There’s also a softer side to be found here in the music that accompanies the subplot of Adam Young and his group of friends known as The Them, as well as adjacent plot point involving the witch Anathema and witch hunter Newt Pulscifer. Replete with acoustic guitars and accordions, these tracks bring to mind a more folksy feel that’s reminiscent of Mark Knopfler’s Princess Bride score.

Aside from these recurring themes, which you’ll be hearing an awful lot, there are a number of standout tracks on the album. Witch, for example, is one of the most cinematic pieces present, a marching, gothic tune with echoes of a bigger more orchestral score trying to break through. It’s on this track that we get a flavour of Arnold’s larger scores, with a hint of Bond emerging.

Elsewhere, Atlantis also presents a grand, sweeping, epic tone, channelling the kind of grandiose score that wouldn’t be out of place in a big budget fantasy.

Anathema Meets The Them, on the other hand shows a far more laid back side to the score; an amalgamation of the album’s more summery tracks that would be perfect with a glass of white wine on the terrace. It’s perfectly accompanied by Is That You with its piano and twanging guitars.

Crucified presents a sombre lament, simple and violin driven. It’s a genuinely beautiful piece of music and one of the standout tracks. It’s followed up soon after with a fun, short little jaunt in the shape of The Globe, a jangly, piece of Victoriana which is one of the more enjoyable short tracks.

Closing out disc 1, Aliens introduces a cheeky bit of theremin into the score, channelling both 60s sci-fi and John Williams.

Disc 2 features some of the more urgent tracks on the album, with Horsemen To The Airfield and Requiem For A Bentley bringing the Brian May-esque guitars back into the mix, while Despatch The Horsemen is another big cinematic Arnold track.

The album closes out not with David Arnold, but with Tori Amos covering A Nightingale Sang In Berkley Square; stripped back with piano and vocals, it’s a lovely song that fits both musically and thematically with the story.

There’s a lot in the Good Omens soundtrack to enjoy, but that’s where the biggest bugbear is; this release is perhaps too comprehensive. There are many tracks of incidental music, a minute or less in length that, while they are perfectly fine and evocative with the scenes they accompany, simply don’t work as a larger release. The two-disc set may be great value, but it’s not something you’re likely to sit down and listen to in one go which is a real shame.

Still, David Arnold shows his pedigree once again, and the compositions are undeniably eclectic, reaching from all corners of his career. Jaunty yet dark, upbeat yet melancholic, the Good Omens soundtrack is a great listen, but perhaps not one that’s essential to own.