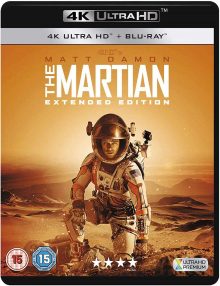 Ridley Scott is, arguably, one of the grandads of modern Sci-Fi cinema, having given us such greats as Alien and Blade Runner. However, a glance at his filmography shows a prolific director who refuses to be pigeonholed into one specific genre. A Ridley Scott Sci-Fi movie is something to be anticipated though, and the 2010s brought us three – 2012’s underrated Prometheus, 2017’s disappointing Alien: Covenant and, sandwiched between the two, The Martian in 2015.

An adaptation of Andy Weir’s critically acclaimed novel, The Martian follows the story of a group of NASA astronauts on an exploratory mission to the red planet. As they are caught in a freak storm while returning to their landing craft one of their number, Mark Watney, is struck by a flying radar dish and left for dead. As the storm clears, Watney is revealed to be alive and alone on Mars.

What follows is a cross between Castaway and Apollo 13, with the narrative focusing initially on the abandoned Watney as he uses both his expertise as an astronaut and his experience as a trained botanist to survive on Mars while he attempts to make contact with mission control and arrange a rescue. Meanwhile, on Earth we follow the experts in NASA mission control who, after discovering Watney is alive, have to handle both the rescue attempt as well as the PR nightmare that emerges after they’d initially announced the astronaut as dead.

The closest analogue for The Martian is probably Alfonso Cuaron’s 2013 space thriller, Gravity. However, where that was a taut, tense and claustrophobic story, The Martian is more of a character-focused, science-heavy piece. It also helps that it has a remarkably good sense of humour. Matt Damon as Watney is hugely likeable, his video diaries (the way Mark engages with the viewer and a code adaptation of the prize of the novel) full of science talk that never feels like technobabble and an acerbic wit in the face of adversity. You find yourself genuinely rooting for him as he works to repurpose the team’s abandoned equipment and habitat, and even begins growing his own potatoes using food supplies and the only source of manure he has to hand (hint: he has to make it himself…)

This is how we spend the first third or so of the film before we switch back to Earth and mission control as they begin to put the pieces together, first through satellite imagery showing the equipment moving around on the planet surface, and then through Watney finally finding a way to make contact. There are a lot of moving parts in this film and Drew Goddard’s snappy script (Goddard was originally set to direct before leaving the project to helm the now abandoned Sinister Six at Sony) keeps things both moving and light enough to follow – an impressive task for a film with a running time of nearly 2 and a half hours! It’s also a story that’s as much about optimism and the wonder of discovery as it is about the despair of finding yourself alone in an alien land.

A lot of credit has to be given to the cast here. As well as Damon, we have Jeff Daniels, Chiwetel Ejiofor, Kristen Wiig, Benedict Wong, Sean Bean, Donald Glover and Mackenzie Davis as the mission control team, while Jessica Chastain, Sebastian Stan, Kate Mara, Michel Pena and Aksel Hennie play the rest of Watney’s crew. That’s a big cast full of high profile actors but the film gives everyone a chance to both develop their character as well as shine and contribute to the story overall.

The Martian is also a hell of a looker, using a mix of green screen sets and location shooting in Jordan to bring Mars to life in a stunningly convincing way. While there’s a lot of practical sets, props and costumes, everything is augmented by some of the most invisible CG I’ve seen. The documentary on the bonus disc shows how a lot of this was put together, but the sheer number of elements that are CG is mind-blowing; the film was rightfully nominated for a Best Visual Effects Oscar in 2016, losing out on the night to Ex Machina. Audio is no slouch either, with a rousing score from Harry Gregson-Williams complementing a brilliantly designed sound mix.

This home release comes on 3 discs, 1 UHD Blu-ray and 2 HD Blu-Rays. The film is presented in both theatrical and extended cuts with the extended version boasting around 10 minutes of extra footage, mostly dedicated to building the characters up.

The UHD disc is the star of the show here and gives owners a fantastic reference disc for their 4K setup. The image is crisp and clear, with the 4K image allowing details to pop from every frame, be it trim on discs suits, cracks on distant mountains or the pinprick stars against the deep blacks of space. The HDR colours are fantastic, with the deep reds of Mars contrasting with the more clinical colours of the ship and habitat interiors. The Earth-based shots with wider natural tones allow the palette to explore a wide range of colours and help bring the filmed excellent cinematography to the fore. The audio is also well balanced with dialogue being appropriately high in the mix leading to a fantastic viewing experience.

There aren’t a huge amount of extra features, but they definitely warrant a look. Aside from the usual gag reel and trailers we get a commentary from Ridley Scott, Drew Goddard and Andy Weir, a feature-length documentary on the making of which has some eye-opening insights into how the VFX team built Mars. The centerpiece though, arguably, is the short documentary on NASA’s real-life mission to send astronauts to the red planet. With the context of the film itself, seeing the elements of NASA’s research that the filmmakers used to instruct their story is fascinating, as is the recording of a Q&A held in conjunction with the launch of the film to look at the heavier aspects of the science behind making such a trip. For anyone with an interest in space travel and astrophysics, they’re an essential watch.

As a film, The Martian is arguably one of the best sci-fi releases of the 2010s. As a home release, it’s pretty much essential for 4K owners.