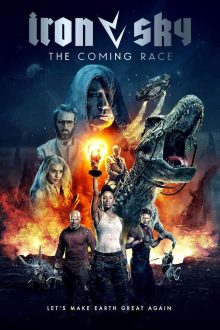 In my review of Rendel: Dark Vengeance I talked about how relatively few Finnish films make it out of the country, but what do you know, a couple of months later another one comes along! Iron Sky: The Coming Race is the sequel to the crowd-funded cult sci-fi farce Iron Sky. Like its predecessor, it’s getting a limited theatrical run before hitting the home entertainment market. Being married into a Finnish family, I’m contractually obliged to watch any film from the country that is released here in the UK, so I requested a link to check it out.

Iron Sky: The Coming Race is set 20 years after the first film, which ended with the Earth devastated by nuclear war, triggered by the invasion of Moon Nazis. The survivors live on the dark side of the moon on the Nazi’s old base. Their new civilisation is struggling though and the base is on its last legs. When some survivors from Earth arrive, as well as a surprise visitor from the past, hope comes in the form of a secret city hidden in the centre of the Earth. Obi Washington (Lara Rossi), the daughter of the base’s leader Renate Richter (Julia Dietze), and her ragtag team volunteer to head down there to find a power source and possibly another place to live.

When they arrive though, they find the city is populated by dinosaurs and run by Adolf Hitler (Udo Kier) and his cabinet of former Earth dictators, all of whom are actually reptilian creatures called the Vril.

I wasn’t a big fan of Iron Sky, so my hopes weren’t high for this, but I thought it would at least be a bit of daft fun, like its predecessor. Unfortunately, it barely reached my low expectations. Like Iron Sky, the script feels like it began with some disparate silly ideas that were tied together as best they could with a flimsy story. The second time around, the main concept seemed to be ‘let’s have Nazis riding dinosaurs!’ It’s a fun idea, but not enough to carry a film.

The main problem though is that the jokes never really deliver. For such a silly film, I was disappointed to find myself never raising more than a slight chuckle and only managing that on a number of occasions I could count on one hand. It’s partly down to the writing, but also down to the performances, which lurch between hammy and bland. The central relationship between Obi and Sasha (Vladimir Burlakov) lacks chemistry for instance. Kier makes an enjoyably over the top bad guy though, and Tom Green (where’s he been all these years?) pulls off a few gags, even if his character is merely part of an overly stretched on-going joke about Apple and Steve Jobs.

As an action film The Coming Race falls short too. I realise it was made on a low budget, but the set pieces feel like they stop before they get going. Perhaps it’s the lack of tension leading up to them though that makes them feel under-baked. There’s a lack of drama and excitement in general, largely due to low, or at least poorly established, stakes.

One positive I’d note is that a lot of the special effects were pretty good, considering the budget. The compositing (combining of elements) isn’t always great, particularly when we see people riding the dinosaurs (which look a little dated too), but the design of the world hidden in the centre of the Earth is decent and some of the spacecraft sequences look impressive.

But a few decent special effects aren’t enough to save an otherwise lacklustre effort. There are a few mildly amusing gags and enjoyably silly moments here and there, but on the whole it never really gets off the ground. Hopefully, the Moon Nazis have finally had their day and the makers can use their crowdfunding skills to pay for something better next time.

Iron Sky: The Coming Race is out now in selected cinemas and on Blu-Ray, DVD and Digital on 6th May in the UK, released by 101 Films. I watched a digital screener so can’t comment on the picture quality of any of the discs. I can’t find any details on special features, so I assume both physical copies are bare bones, which is a shame as I’d be interested in finding out more about the production, even if the film did little for me.