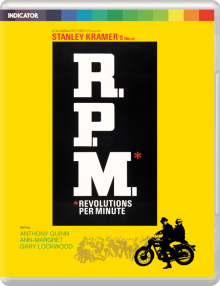 In 1970 Stanley Kramer was riding on a tidal wave of goodwill. He had closed out the decade with the much-lauded 1967 classic Guess Who’s Coming For Dinner?, which earned 10 Academy Award nominations, and the very well received The Secret of Santa Vittoria. He could do very little wrong until R.P.M.* (political Revolutions Per Minute) was released and suddenly that goodwill left him pretty promptly. Critics and the audience did not take to the film, due to a number of factors. The film was released in the height of student activism on college campuses so perhaps the movie-going public was just worn out from witnessing what they were experiencing on the screen again. Also, in a lot of posters that I have seen, it was advertised incorrectly. The posters cause you to think it is a mere drama about a professor fraternising with his students when of course it was so much more than that. A return to this film was required and luckily for us, Indicator has not merely delivered the film back for us to view again, but have brought it back in a brilliant remastering.

Instead of the professor fraternising with his students, R.P.M. is in fact about an American college that has lost control of its students who have taken over the main campus buildings. The college president has resigned and the school board have no choice but to appoint the student’s preferential choice as the new president. That choice is Professor ‘Paco’ Perez (The Secret of Santa Vittoria‘s Anthony Quinn) who presently discovers that three of the 12 demands listed by the students can merely be unmet and now he has to work out how to accommodate everyone’s needs without losing control like his predecessor. Can he work as a successful mediator or are the students too far entrenched in their standoff to reel back in for peace?

When I was younger, I first watched R.P.M. on TCM. My dad would always have the channel on and, being the dutiful son that I am, I would watch whatever he did (so much so that I think I have now endured every episode of Gunsmoke). One-day R.P.M. came on and it noted in the promo voiceover that it was a Stanley Kramer film. I was familiar with who Stanley Kramer was at this time, but had yet not watched one of his films. I perked up and decided to stay in on a rainy afternoon and watch the film, and it was a sound decision as I thoroughly enjoyed it. But would that enjoyment hold up for me now, years later?

There has never been a more timely moment to revisit R.P.M. Despite the film very much being set in the late 1960s, its topics are becoming more and more prevalent in this current political climate. If you look at our current political environment in the United Kingdom and the United States you can see the cycle beginning again and sadly many the issues the students were protesting during that time have almost remained the same (just with a different coat of paint). With how the film pans out, how will the ‘Pacos’ of our generation cope with the two sides they discover themselves unwillingly in-between? 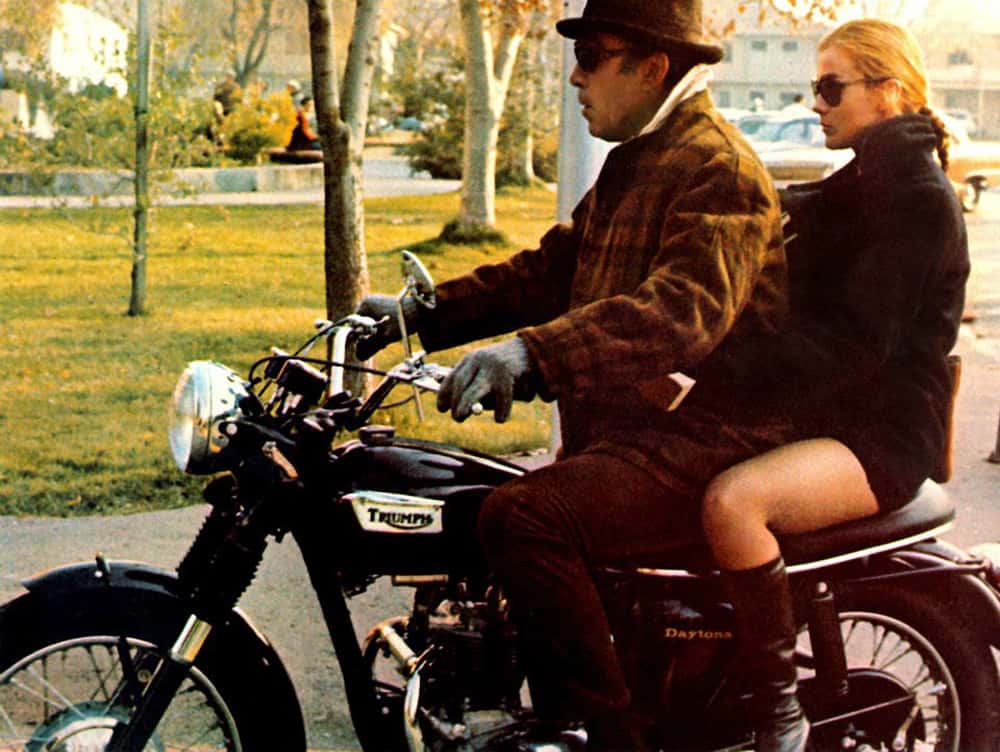 Anthony Quinn is solid as ‘Paco’ and his performance highlights the ability he had as an actor but rarely showed in the later parts of his career, especially when portraying a character just filled with frustration because of both the board and his ever-growing strained relationship with the students. For me, however, the stand out of the film was Ann-Margaret who was given the opportunity to be a strong and confident female lead while also embracing her beauty and sexuality (something not witnessed often pre 1970). The strength of the cast (though some of the students are a little on the senior side to be acting as young college students) help to enhance the writing and are not one-note characters. They feel fleshed out and have their own arcs even when they are having little interactions with each other verbally or with a simple look.

It is evident that Kramer wanted to connect with his audience again, to show he was with those who are activists and the youths of America. In a way he became his lead character, the students have gone past Perez with their thoughts and demands. He is under the sincere belief that he truly knows what they demand, especially at the start of the film. He is merrily playing up the role of the showman, the all-conquering hero when he walks into the building around all of the students who cheer him in. But in the short time he spends with the frustrated students he quickly realises he isn’t one of them anymore, he can’t be with his new authority. Simply put, their beliefs have left him behind and he is unable to fight their fight. With R.P.M., Kramer wanted to show he understands the frustration of the younger generation but they have also surpassed him, they are concerned with other things, their thoughts on the older generation who were once in their shoes has changed. People like Perez and Kramer are not considered the leaders anymore. They are the mere mediators and at the time, neither side felt mediators were wanted or needed.

Unlike a few of Kramer’s films, R.P.M. runs at a swift 92 minutes, which is a shame as I feel that if there was more time given to these characters then it could have landed more of its ideas more effectively to make it a great film. Honestly? It deserves more notoriety than it achieved on its original release and hopefully, with a restored print such as the one Indicator have produced, it and others like it will get that appreciation. 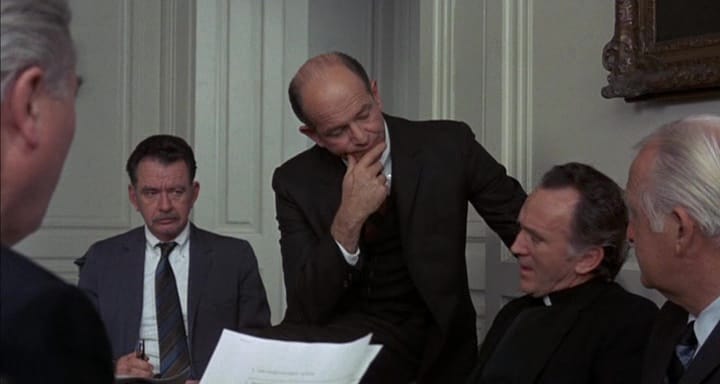 R.P.M. was released on 21st January by Powerhouse Films on Blu-Ray as part of their Indicator label in the UK. Rather than being full of  documentaries about the production of the film, instead it has a great selection of extra features which include:

The standout reason to purchase this limited edition Blu-Ray is for the remastering. As mentioned, I remember watching this film on TCM many years ago and the differences between the two are night and day. The amount of work required to have the film restored to the condition it is in now cannot be understated. I haven’t viewed many films after they have been remastered, so seeing how this one has turned out was a welcome surprise. Remastering works like this almost cause the viewer to reconsider the film. The original version looked very poor and I was extremely impressed with the differences. Seeing a side by side comparison helps you appreciate the work even more.

One interesting addition to the Blu-Ray was the isolated music and effects audio track to the film. I can’t precisely remember a film that produced such a track. We can hear clapping, coughs and even the sounds of someone sitting down, but no vocal tracks. It is unique to listen through, though a film with more music or sound effects would get better use of this type of track.

Film Historian Paul Talbot provides an extensive analysis of what we are seeing in his audio commentary. Sadly however his commentary isn’t a continual conversation as he comes in and out throughout the film, which is a shame as he obviously has a lot of knowledge about the film and I was very interested in what he had to say. An example was when he noted that the screenplay called for harsher language and more graphic images than what we ultimately ended up with. Would the original screenplay have been more powerful in some of these instances? I found it strange Kramer did make such edits as it still had an R rating in America upon its release and would not have received an X rating from what Talbot mentioned in his commentary.

The trivia added by Talbot was great as he was able to describe little tidbits like Ann Margaret’s original trepidation over certain nude scenes, stating she would only do them for Stanley Kramer, but in fact, did more throughout the rest of her career. Another interesting piece of trivia that I learned was that Kramer and Eric Segal frequently took a lot of influence (some would say just lifted) information from some of the actual campus protests and riots in the late ’60s and did the same when they selected the 12 demands of the students. Whether this was to show they had their fingers on the pulse of the protests or shows that they didn’t want to anger anyone by adding in different demands remain unclear.

Although the commentary was a little dry it was still fascinating to learn so much about the film, and the actor’s backgrounds and history. A lot of this I had no idea about and I felt like I was actually learning about a bit of film history rather than watching and listening to a generic audio track. A meaningful inclusion, unlike some audio commentaries that I have heard.

The music remains a vital asset to R.P.M., and it was entertaining to see a wonderful albeit short documentary on the score and music of the film. This was the first special feature that I watched after watching the film and I was excited to observe what they had to say. Getting to hear Barry De Vorzon provide little insights was an excellent decision. Learning that he had in fact never produced a score was absolutely fascinating as you would not have assumed as much from what we heard. Also, going through all of the processes of how the music was made and the techniques that composers had to work through in the 1970s. A must watch for music lovers.

Overall a great disc to purchase for the fan of the underappreciated film. The remastering remains the star of the show on this one and hats off to Indicator for it.