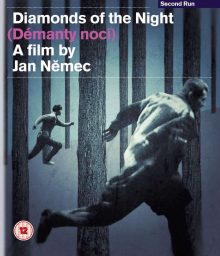 So many films have been made about the Holocaust over the years that it’s difficult for any of them to stand out against one another. There are plenty of great ones, but even the best tend to offer only marginally different twists on the bleak and horrifying subject. As such, I wasn’t overly eager to watch Second Run’s latest Blu-Ray upgrade, Diamonds of the Night (a.k.a. Démanty noci) after hearing what it was about. However, the film proved to be a Holocaust film truly like no other and a stunning work of cinema to boot.

The debut feature of Jan Němec, Diamonds of the Night was one of the early films of the Czech New Wave and was based on a story by Arnost Lustig, a renowned Jewish Czech author who wrote many novels, short stories, plays and screenplays about the Holocaust. A teenager during the war, he was put in 3 different concentration camps until escaping on the way to Dachau when his train was bombed by American planes whose pilots mistook it for a military transport. These experiences shaped Lustig’s work for most of his life. The first film adaptation of his writing was also directed by Němec, in the form of the short film A Piece of Bread. This was the start of a handful of adaptations by Czech filmmakers in the early 60s and he became so interested in film that he wrote from scratch and directed a TV movie in 1965, Modlitba pro Katerinu Horovitzovou. He wrote a few other screenplays later in life and died in 2011 at the age of 84. Still full of ideas late in life, his daughter said they found several unreleased screenplays in his desk drawer after his death.

Lustig reportedly stated that Diamonds of the Night was the best adaptation of his work though and, after watching the film, it’s equally clear and surprising to hear. It’s clear because it’s such an incredible film, but surprising because it’s such a cinematic piece of work that rarely feels literary in style. Indeed Němec made one huge change when adapting the story. In Lustig’s book, the two characters spend a great deal of time talking to each other about their situation. In the film, there is very little dialogue at all, other than a couple of brief statements and some largely untranslated German chatter in the final act.

I’m getting ahead of myself though, as I haven’t explained what the film is about. As mentioned, this is a unique take on the Holocaust film. Most notably, it’s not actually set in a concentration camp. In fact, there isn’t any audible mention of one either. The film opens with two boys running from a train (making its autobiographical nature clear to those who know its author) and we can only assume it was taking them to a concentration camp due to some German shouts and gunfire in the background. Those with the appropriate historical/language knowledge will also notice the big letters ‘KL’ painted on their backs in the flashbacks (and briefly as they run from the train), which was a common abbreviation of Konzentrationslager, or concentration camp in English.

The boys’ desperate journey away from their pursuers makes up most of the rest of the film. Trudging through the forrest, one with an injured foot and both growing ever more starving as they go on, they struggle to survive. Interspersed with this desperate scramble to who-knows-where are flashbacks to life before their plight, dreams of where they’d rather be and strange glimpses into their thought processes which are ever fractured by their circumstances and health.

It’s a tactile and visceral film that places the audience in the minds and bodies of its protagonists. Everything is crafted to make you feel the pain and desperation of the boys, as well as the occasional glimpses of hope and longing. As such it feels deeply natural while at the same time quite abstract and poetic through its frequent flashbacks/dream sequences and lack of discernible dialogue. 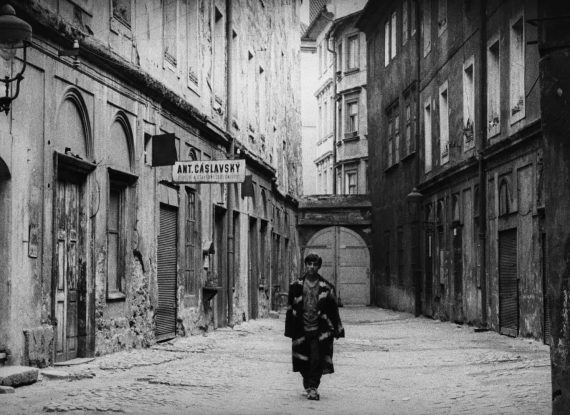 One of the driving forces behind the film’s ability to put you inside the film, so to speak, is the sound design. There is no non-diegetic music and, as mentioned, very little dialogue, so practically all of the soundtrack depends on the design and mix of the effects. Like the storytelling and editing, this can be quite abstract, with echoes of the flashbacks, dreams and reality blending in to one another to disorientate or create a kind of non-verbal poetry. It sounds pretentious, but it really is an incredible achievement in the field. It’s a fairly minimalist style of sound design though, with key effects accentuated for greater impact. For instance, the sound of footsteps and other repetitive rhythms are frequently used, giving the film a relentless intensity. When the footsteps stop in any scene your attention is immediately drawn to what is happening. A prime example of this shift is when the boys are caught in a torrential rain storm. They simply stand in it and use it to cleanse their bodies and drink in a kind of ecstasy, but are eventually beaten down by it.

Adding to the superb sound design is some striking cinematography. With harshly contrasting, dirty black and white handheld photography in the present day sequences and bright, sometimes even burnt out and largely static dream and flashback sequences, the two ‘worlds’ are clearly separated, aiding the viewer in differentiating between them as well as highlighting the dramatically different experiences.

There’s an astonishingly well-executed long tracking shot that opens the film too. It may not last as long as some of the one-cut sequences (or even films) we’ve seen in more recent years, but considering the age of the film, the setting and the fact the shot moves from extreme wide to intense close up without losing much focus or quality, it’s an astounding achievement. It’s not just the young Němec showing off either, the shot acts to hurtle us straight into the characters’ desperate situation and make us a part of it. 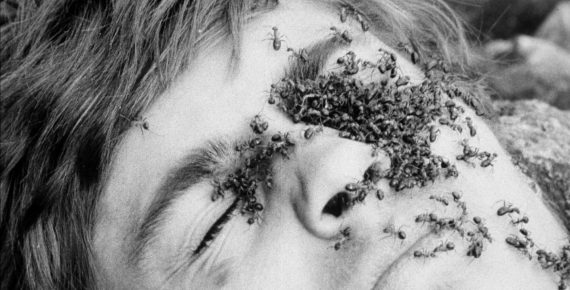 Overall then, it’s a strikingly powerful and boldly unique holocaust film. It uses cinematic technique to create a frighteningly oppressive and tense atmosphere from seemingly very little. There’s real humanity here too. Not the warm, fuzzy kind, but the sense of real characters whose minds we inhabit (one of them at least) through the course of the film. Kept mercifully short, it’s a sharp shock to the senses that will haunt you for long after, despite a lack of on-screen violence or the usual graphic depictions of torture, murder or neglect you get in most films about the Holocaust. It’s a superb piece of filmmaking and further proof of the incredibly high quality of the films released during the relatively short period of the Czech New Wave.

Diamonds of the Night is out now on Blu-Ray and DVD in the UK, released by Second Run. I watched the Blu-Ray version and it looks and sounds great. The rugged, often handheld look of the film means it’s never going to look 100% sharp and clean all of the time, but the transfer here is free of any clear deterioration or issues with the move to digital.

Brooke’s commentary is excellent, covering a lot of ground despite the short length of the film itself. Hames’ appreciation is similarly informative. The Lustigova interview is fascinating, telling more about her father’s life and work. It makes you appreciate the autobiographical aspects of the story in particular. The inclusion of the short is more than welcome too, particularly as it’s also based on a story by Lustig. Finally, as always, the booklet offers a deep insight into the film and its makers.