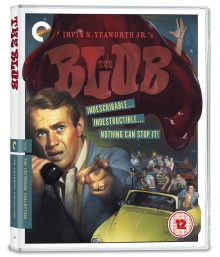 As a teenager in the late 80s, I discovered a film in my local video shop called The Blob that I fell in love with and would watch religiously. I would later find out that this film about a giant man-eating blob of jelly terrorising a small American town made in 1988 and starring Kevin Dillon, was a remake of a 1950s B-movie featuring an early role for Steve McQueen, who would go on to become a Hollywood megastar in the 1960s. In all the years that have passed since then I had never seen the original – until now.

The Blob opens with teenager Steve Andrews (Steve McQueen, who was 28 when the film was released and looking nearer 40!) making out in a convertible with his girlfriend Jane (Aneta Corsaut) when they witness a falling star land a few miles from where they’re parked. They decide to investigate it, so they drive off to try to find it.

Meanwhile, the meteor has landed in an old man’s farm. The old man (Olin Howland) finds the meteor and begins poking at it with a stick. The meteor cracks open, and the goo inside coats the stick and rapidly oozes onto his hand. Unable to get if off, he goes running into the road, where he is rescued by Steve and Jane. 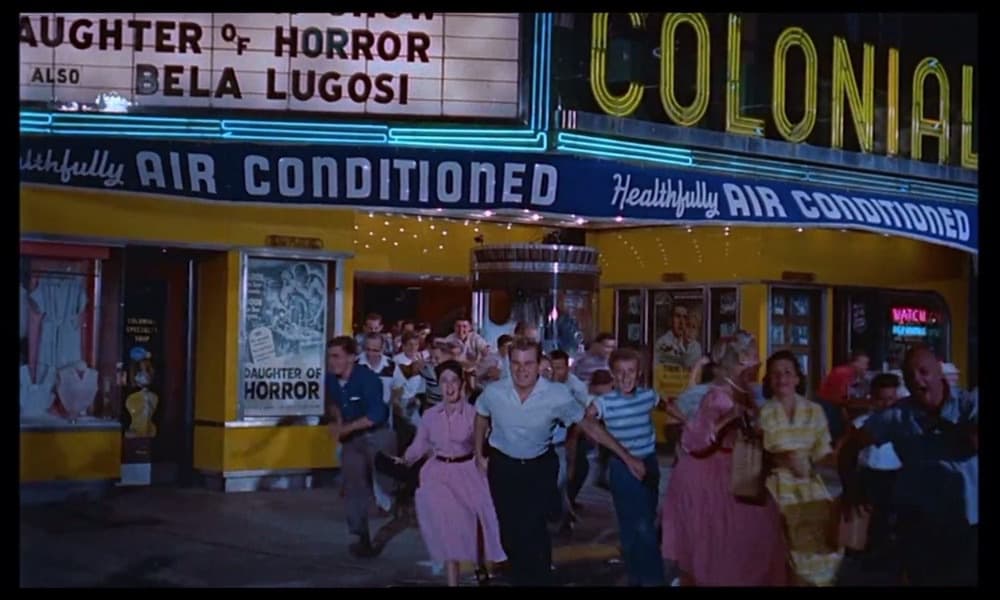 The couple take him to the local doctor, who sedates the old man and determines that he’s dealing with some sort of parasite. He sends Steve and Jane to the old man’s property to see if they can find any information that might enable the doctor to treat him. Whilst the doctor goes to phone his nurse to ask her to return to the office to assist him, the blob starts to spread across the old man’s body. By the time the nurse arrives, the old man has been completely completely engulfed by the blob. The nurse attempts to stop the blob by throwing acid on it, but this doesn’t work and she becomes its next victim. When Steve and Jane return to the doctor’s office, Steve witnesses the doctor get eaten by the blob through a window. Calling the police, Steve and Jane are treated as pranksters, and it is up to them and a group of their teenage friends to stop the creature.

Watching The Blob is like watching two films rolled into one. The first deals with the actual blob, a hungry monster from outer space consuming everything in its path – typical B-movie fare. The second deals with the conflict between the local teenagers and the adults, which is portrayed best by the police, who refuse to believe the teenagers’ cries for help. Overall, The Blob earns its cult status – with this strange mix of rebel teen tale and B-horror movie tropes working well as both for the most part. The effects are minimal and surprisingly not bad, especially during the climax of the film. As you would expect, Steve McQueen turns in a captivating and heartfelt performance that shows how he was able to become a superstar just a few short years later.

The movie’s ending is a bit swift and a bit random – the blob’s fatal weakness seeming just a bit too convenient given the circumstances – seemingly like the producers ran out of money or time and just changed the originally written climax. However, it does set up its belated sequel, 1971’s Beware! The Blob, the only film to be directed by actor Larry Hagman (better known as JR Ewing from Dallas). 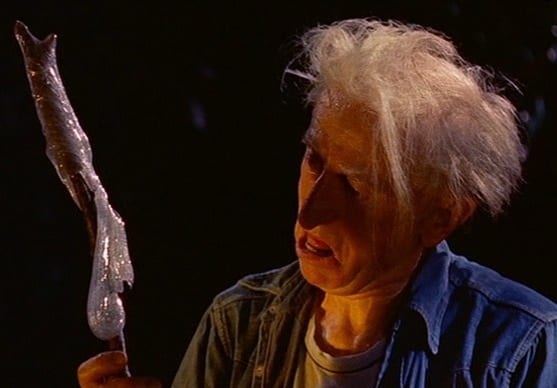 Considering the age of the film, I was very impressed with the excellent transfer on this Criterion Collection Blu-ray. The picture really pops with a wide range of colour hues, particularly the 1950s neon signs. The sound is also remastered well with a clear mono soundtrack.

With two audio commentaries included, this Blu-ray keeps audiences well-informed about the origins of The Blob with commentaries from producer Jack H. Harris and film historian Bruce Eder and, on the second one, director Irvin S. Yeaworth Jr. and actor Robert Fields.

Also included is a collection of behind-the-scenes photographs, some annotated, called Blobabilia! and an original trailer. The package is rounded off with a booklet including an essay on the film by Kim Newman.

Featuring a simple but imaginatively portrayed monster, The Blob is a cult drive-in B-horror classic that overcomes its limitations with campy humour, strong performances and a visual sheen that transcends its low budget. Starring Steve McQueen in one of his earliest performances, the film easily matches its 1980s remake. Although the collection of special features are disappointing, this package is highly recommended to all horror fans.

The Blob is released on Blu-ray by Sony Pictures as part of The Criterion Collections and includes as extras:

• Two audio commentaries: one by producer Jack H. Harris and film historian Bruce Eder and the other by director Irvin S. Yeaworth Jr. and actor Robert Fields
• Trailer
• Blobabilia!, a gallery of collector Wes Shank’s rare trove of stills, posters, props (including the blob itself!) and other ephemera
• PLUS: An essay by critic Kim Newman