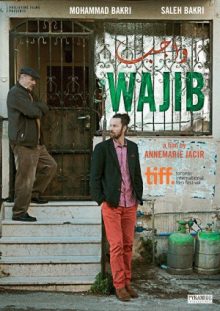 Wajib’s title can perhaps best be translated as ‘social duty’, an obligation to your community. In this case it is referring to the local Palestinian custom of hand delivering wedding invitations to each guest. Shadi, who has become estranged from his father since moving to Europe, travels back to the city he grew up in to fulfill this obligation. Throughout their road trip, they have to contend with the conflicts that pulled them apart in the first place.

The film takes place in Nazareth, which is known as “the Arab capital of Israel”. Most of its inhabitants are Arab Muslims and Christians. The view of Nazareth the film constructs is one of a population that’s less melting pot and more pressure cooker. From garbage piling high due to a failing municipality to sudden street fights breaking out in the middle of town, it is made clear this is a city in strife.

The reason for many of these issues—the Israel/Palestine conflict—is perpetually part of the film’s background, even if it never entirely takes over the narrative. It is only natural that it would be, after all this closely mirrors the role it plays in the lives of many of Israel’s citizens. The war is not the entire reason for the estrangement between Shadi and Abu Shadi, but it is the fulcrum around which their conflict turns.

Their disagreements are quite universal when stripped down; after all the generational issues between parent and child have always been a point of contention in every culture and society. The cultural context in which their particular arguments are taking place in is what makes this specific story engaging however. All throughout Jacir never preaches, but doesn’t shy away from the issue either. Both the son’s rebellious anger and young naiveté and the father’s tired complacency and careful maturity are handled with the same amount of sympathy and care. 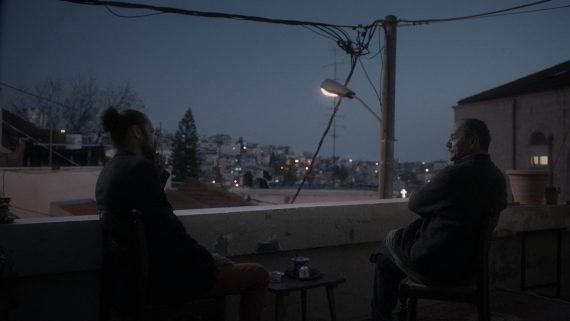 As the duo ambles around Nazareth’s winding streets in Abu Shadi’s old car, the narrative unfolds in the same gentle pace. The central conflict is subdued at first and builds in small increments, from one conversation full of side-steps and half-truths to another. At times this slow pacing drags a little, but never enough to truly hamper the film.

The script is believable and full of understated humour. Abu Shabi describing the beauty of Palestine to someone who has never been there on the phone, while he is looking at streets overflowing with trash and gaudy tourist stands, was a brilliant moment. The two lead actors deliver their lines with a natural simplicity which lends a certain intimacy to each scene, making it feel like a conversation you happened to catch in passing. It’s subtle but effective and works in perfect tandem with the unaffected script.

Nothing about the film’s visual work is particularly exciting or daring, but it doesn’t need to be. It captures the ancient beauty of Nazareth through its gentle tracking shots and muted colours well enough.

Wajib paints a sensitive and insightful picture of a country in upheaval trying desperately to cling to normalcy. It’s easy to see why Abu Shabi doesn’t want to leave, even if everyone else in his family is abandoning the place. “Where is this Palestine you keep talking about?” he asks his son during one of their arguments about the Israeli occupation. “I’m living it here.”

Wajib is being released in cinemas on 14th September by New Wave Films.