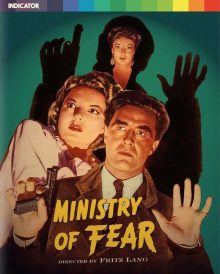 Fritz Lang was a cinematic pioneer back in Germany in the 20s and early 30s, directing classics such as M, Metropolis and the Dr. Mabuse films. When the Nazis rose to power though he left the country, despite being offered the job of head of the German Cinema Institute by Goebbels himself. After a brief stay in Paris, he moved to America to work in Hollywood for MGM initially. He never quite reached the heights he did in his home country, directing mainly B-movies, but he still made a few great films. A couple of years into WWII he was able to channel his anti-Nazi sentiment into his work, producing a loose sort of trilogy of films that stuck it to Hitler. These were Man Hunt (which I reviewed here – https://blueprintreview.co.uk/2017/10/man-hunt/), Hangmen Also Die! and Ministry of Fear. The first two have been released on Blu-Ray by Signal One and Arrow respectively, and now it’s Powerhouse’s turn, giving Ministry of Fear the HD treatment as part of their Indicator label.

Ministry of Fear opens with Stephen Neale (Ray Milland) being released from an asylum where he was put (we learn later) for assisting in the suicide of his terminally ill wife. Before heading back to London he pops into a local fete put on for the Mothers of Free Nations charity. There he visits a fortune teller who gives him mysterious instructions to win a cake on another stall. He does this, but as he’s not the intended recipient of the cake, which has a secret hidden within it, he ends up in the middle of an elaborate and deadly Nazi plot he must unravel to save his skin and sanity. Along the way he’s assisted by Austrian refugee siblings Willi (Carl Esmond) and Carla Hilfe (Marjorie Reynolds), who run the Mothers of the Free Nations and are appalled to discover their charity is being used as a front for a Nazi spy ring. Stephen falls in love with Carla along the way, but can he trust her? 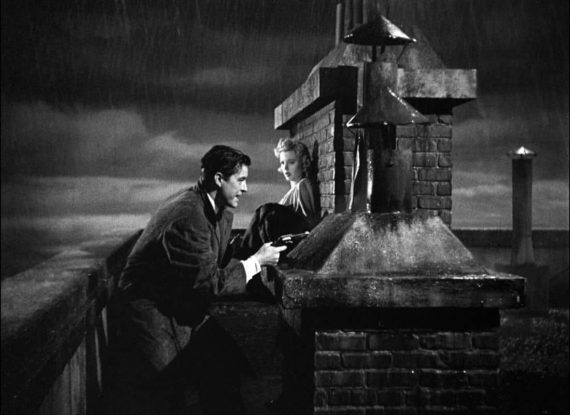 It’s an enjoyably elaborate mystery that reminded me a little of The 39th Steps as well as Man Hunt. Stylistically it’s different to both of them though as it has more of a film noir look to it that borrows from German expressionism and has more of a slightly surreal quality to it. A key seance scene in the middle particularly stands out in this sense. With low key, stylised lighting and a wonderful use of darkness and light, matched with a supernatural element, it could almost be called a horror sequence. Great use of light and shadow are made throughout in fact, particularly in the final gunfight.

It was the intrigue of the story unravelling that kept me engaged though. It may not be as snappy as The 39 Steps, but instead takes things more seriously and turns a few very dark corners. The death of Stephen’s wife’s is a particularly grim yet poignant touch and there is a pretty brutal suicide by scissors later on.

There are some minor issues I had with the film. The central romance felt a bit weak and the gag ending felt out of place and poorly made with a dodgy processed car shot. I felt like more could have been made of Stephen’s mental state too and the enemy’s manipulation of it. The film starts to take steps towards this angle, but never quite pushes it far enough. I didn’t get the sense that Stephen was reaching breaking point, but feel that might have made his plight more thrilling to watch.

So it’s not quite as sharp or consistent as Lang’s best work or some other wartime thrillers, but Ministry of Fear is still an entertaining, engrossing and atmospheric film that’s well worth checking out. 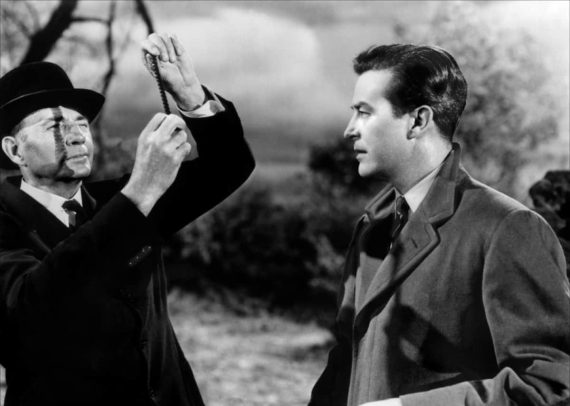 Ministry of Fear is being re-released on 27th August by Powerhouse Films on Blu-Ray as part of their Indicator label in the UK. The picture and audio quality are both first rate.

I haven’t had chance to listen to the BFI interview yet, but I watched the two featurettes and they’re excellent. Rayns focusses on Lang, where Wootton talks more about Greene and the adaptation, so the two contributors don’t step on each others toes and get a lot of ground covered between them. The booklet is as indispensable as ever too.