I’m posting this a little late, but I did manage to get my Cracking the Collection challenge films for June watched on time. 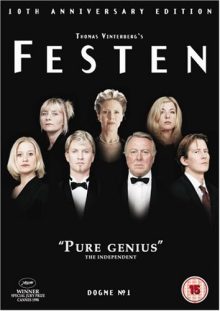 Festen (a.k.a. The Celebration) was the first Dogme 95 film to be released and the first I’ve ever seen. Dogme 95 was a film movement started in 1995 by the Danish directors Lars von Trier and Thomas Vinterberg (the director of this), who created a set of rules to create filmmaking based on the traditional values of story, acting, and theme, and excluding the use of elaborate special effects or technology. As such, the rules made way for some raw, powerful films and helped usher in a new style of naturalism in the 90s and 2000s.

If the rest of the Dogme 95 films are half as good as this, I’d better get watching, because Festen blew me away. Charting a doomed family get-together celebrating a father’s 60th birthday, it tells a dark story of hidden secrets and family politics. It’s not pretty in any sense of the word – the Dogme 95 restrictions mean the camerawork and lighting is rough and ugly and the characters are all despicable. The latter is often a turn-off for me, as I struggle to care about a film when I hate everyone on screen. As revelations come out about the family patriarch though, you do start to sympathise for his children, despite their often abhorrent behaviour. Even without that sympathy though, there’s a car-crash lure to the film which meant I couldn’t tear my eyes away from the screen for a second. Tightly wound, brilliantly performed with a manic energy, it’s a swirling tornado of a film that quickly pulls you in and sucks you down to its shocking depths. To call it a tour de force barely does it justice. 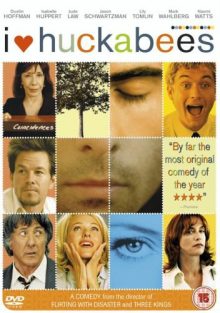 I Heart Huckabees and the next film I watched in June (see below) were titles I was a little dubious about, yet certainly intrigued as they both received quite mixed reviews. The former was particularly intriguing as it seemed to mark a division in director David O. Russell’s career. Not only did his films change from surreal/satirical black comedies to more Oscar-friendly fare, it seemed to mark the moment when I stopped liking his films. I must admit, I haven’t seen all of Russell’s later work, but I didn’t think much to The Fighter or American Hustle, which was a shame after I’d really enjoyed Flirting With Disaster and Three Kings. I was hoping I Heart Huckabees would fall into the later camp, but many of the reviews suggested the film was a disaster.

After finally watching it, I can see why I Heart Huckabees didn’t do very well critically or commercially. It’s overly ambitious, totally bizarre and a bit of a confusing mess at times. However, I found myself enjoying it quite a lot, possibly even for those reasons. Few films are as bold in concept as this, with its bonkers tale existentialist detectives, and although some of the philosophical ideas being explored went over my head and the complex dialogue felt a little forced and hard to take in, I found myself drawn to its madcap energy. It helps that it’s got a superb cast, all of whom seem game for the challenge of depicting this unusual script. It may not always work, but it’s a wild and thought-provoking ride. Here’s hoping Russell one day returns to his early groove. 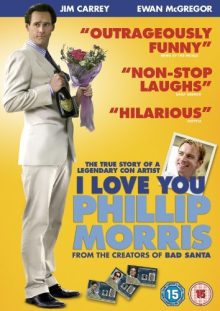 I Love You Phillip Morris

I Love You Phillip Morris is another unusual film that many didn’t feel worked particularly well. Taking the con-man film idea and attaching it to a love story between two gay men, it plays out like a strange combination of Catch Me If You Can and Brokeback Mountain with a healthy dose of black comedy thrown into the mix. It makes for an admirably unique experience, but I wouldn’t say it always works. In using two well known heterosexual actors in the lead roles, it’s odd to see them falling for each other so deeply. There’s a spark in their first couple of scenes together, allowing the audience to buy their relationship, but somewhere between Carrey’s big (but slightly subdued by his standards) performance and all the comedic elements, I never felt as moved by their love as I did with Jake Gyllenhaal and Heath Ledger in Brokeback Mountain for example. It doesn’t help that the depiction of homosexuals here isn’t the most sensitive, with a few stereotypes rearing their ugly heads.

The con-man side of things, as Carrey’s character habitually lies his way in and out of various high paying jobs and prison, is very enjoyable though and the film is genuinely funny at times. It just doesn’t gel into a wholly satisfying film.

Up next in July: