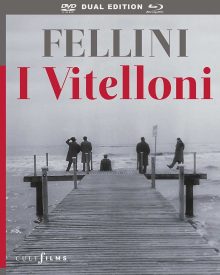 The name Federico Fellini attached to a film tends to conjure certain expectations in the mind; epic, complex, colourful baroque fantasies which tend towards being visually ravishing and mentally exhausting. Though I’ve often found Fellini’s much-lauded 60s and 70s work to be a bit on the stodgy side, I’ve long been a huge fan of his earlier films of the 50s which tend towards a more streamlined narrative approach without sacrificing satisfying thematic weight. Among these classic early works, Fellini’s second film as solo director I Vitelloni is perhaps my favourite. A slice-of-life tale about a group of directionless men whose coming-of-age has been arrested by their own dedication to inertia, I Vitelloni‘s influence can be clearly detected in films like Scorsese’s Mean Streets and especially Barry Levinson’s Diner (although the influence here may have been indirect, since Levinson made the brilliant Diner before he ever saw I Vitelloni).

Where I Vitelloni differs significantly from the later coming-of-age films it influenced is in the ages of its main characters. While the likes of American Graffiti, Diner and The Wanderers focused on much younger men and boys struggling with their transition into early adulthood, I Vitelloni‘s slackers are in their late 20s and early 30s, giving their aversion to responsibility a greater weight of melancholy and, in some cases, a far less sympathetic air. This is particularly true of the film’s main character Fausto (Franco Fabrizi), a scoundrel who we first meet trying to run out on the woman he has impregnated after failing to seduce one of her friends. Forced into marriage and a tedious job at a religious artefacts store, Fausto’s wily ways are not curbed by his new life and he continues his sexually aggressive pursuit of practically every woman with whom he crosses paths. Though he does have a narrative arc that offers a glimmer of hope, Fausto’s loathsome escapades paint a grim picture of a selfish, irresponsible coward that provides I Vitelloni with a riveting narrative spine by way of one who has none of his own. 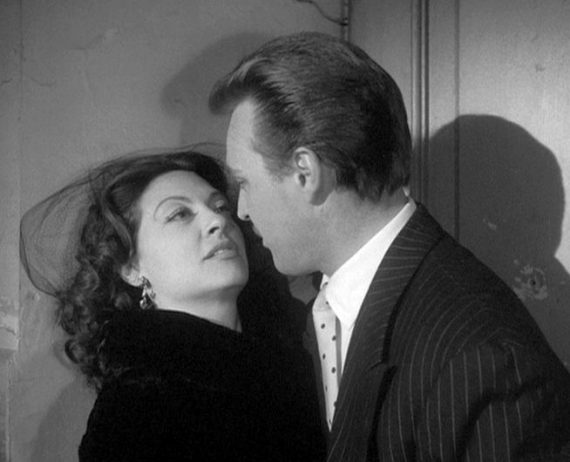 If Fausto’s immoral carousing provides the main narrative thrust of I Vitelloni, it also helps flesh out the characters of his boisterous but rather pathetic gang of friends. The title I Vitelloni is a cross between the Italian words for veal and beef and this sums up its characters perfectly. They are a grotesque hybrid of tortured youth and sinewy adulthood, never quite able to commit to one or the other. By foregrounding Fausto, Fellini implicitly indicates the shortcomings of those who have chosen such a monstrous figure as their leader. Their loyalty to him is partially based on the dishonest version of himself that he projects and this childlike hero-worship inevitably holds them back and lands them in trouble. The everyday inactivities of this mob of ne’er-do-wells weave in and out of the main narrative, creating a gloriously immersive experience.

A particular stand-out as regards performance is Alberto Sordi, a popular Italian comedian who was, at the time I Vitelloni was released, considered box office poison. Though the film’s distributors demanded Sordi’s name be kept off posters for the film, its commercial success played a significant part in reviving his career. Sordi plays Alberto, a daydreaming Mummy’s boy who relies on his mother and sister to support him but begins to break down when he discovers his sister is planning on leaving the family for an affair with a married man. In one of the best scenes in the film, a dunken Alberto attends a masquerade ball where he dances long into the night with a giant papier-mache head before drunkenly decrying the wayward activities of the group and mistakenly holding up Fausto’s new marriage and employment as the epitome of happiness. Sordi’s performance in these scenes is one of the finest sad-clown acts of the era. A more straightforwardly comedic subplot is provided in Leopoldo’s (Leopoldo Trieste) tale. An aspiring playwright who is too susceptible to distractions and narcissistic tendencies, he gets to meet his hero, the actor Sergio Natali whom he hopes will agree to appear in his new play. The inevitable scuppering of this dream comes about in an unexpected way which is surprisingly frank for the era, if coy by modern standards. 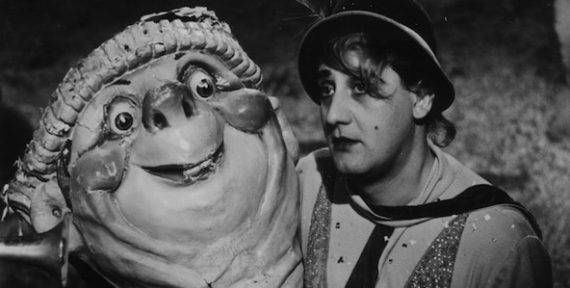 I Vitelloni only came about because the critical and commercial failure of Fellini’s solo debut The White Sheik did not instil enough confidence in his producer Luigi Rovere for him to push ahead with the script for the more unusual La Strada. Rovere asked instead for Fellini to develop a comedy and the result was I Vitelloni, the success of which then allowed La Strada to be made. While it may be one of Fellini’s most readily accessible films, I Vitelloni is still a relatively unusual work. Vacillating between drama and comedy with a natural chameleon-like fluidity, it eschews a strong narrative in favour of a more realistic and ultimately more engaging depiction of a group of characters whose chosen lifestyle seems to doom them to live on the outskirts of satisfaction. The ending provides a sense of hope for two of the character but, as for the rest of them, as the narrator suggest you can imagine the rest of their stories for yourself.

I Vitelloni is released on Dual Edition DVD and Blu-ray by Cult Films on 27 August 2018. Special features are as follows: