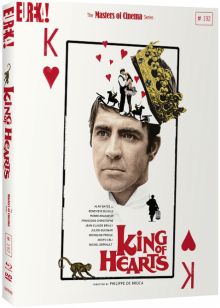 I came across Philipe de Broca’s King of Hearts years ago in a book about cult films. Though its premise and status as a cult favourite intrigued me, the book did also warn that the film has faded in terms of both satirical impact and comedic appeal and feels more cloying than amusing to many modern critics. As a fan of comedy, satire and strange, half-forgotten cinematic gems, I seized upon the opportunity afforded by Eureka’s new Dual Format release of the film to finally make up my own mind.

The premise of King of Hearts is filled with promise. In a small French town at the end of World War I, the retreating German army booby-traps the whole town to explode at midnight. The locals flee, leaving behind only the oblivious inhabitants of the insane asylum and a menagerie of caged circus animals. Scottish soldier Charles Plumpick (Alan Bates) is dispatched on a solo mission to find and diffuse the bomb but when he encounters the last few German soldiers in the town, he takes cover in the asylum where he introduces himself as the King of Hearts. While the Germans are driven back through fear of the unpredictable inmates, Plumpick creates a new problem for himself when he leaves the gates open and his new mentally ill acquaintances follow him out into the town, believing him to be their King and intent on arranging his coronation.

King of Hearts has the feel of classic French farce but instilled with a hint of 60s surrealist whimsy. It also seems to be aiming for a kind of poetic weight, with the physical grace of Chaplin and Tati seeming to be obvious influences. There are moments when the film comes close to achieving these lofty aims. de Broca chooses to shoot much of the action from a distance, allowing his camera to drink in the sumptuous scenery and imbuing the film with a real sense of the big empty spaces in which its characters act out their fantasy. The film’s best moments are those that are not reaching too hard for laughs, such as when the inmates first exit the asylum and begin to don the clothes and assume the roles of the town’s erstwhile inhabitants. de Broca shoots these scenes with a deliberate pace, lingering on a woman’s face as she carefully applies make-up and steps into a new role.

Unfortunately, King of Hearts falls down for me in two crucial areas. The first is its broad satire, which proffers the message that maybe the supposedly insane members of this society are saner than the warmongering people that locked them up in the first place. I’m not opposed to satirical comedy with an obvious message. After all, Kubrick’s Dr. Strangelove is one of the great satires of all time but it’s hardly what you’d call subtle. The problem is that King of Hearts fails to sell its awkward message, with the delusional Utopia the inmates create in the deserted town failing to really stand for anything significant. The attempt to align mental illness with free-spiritedness feels forced and unconvincing. Again, the disconnect with the message need not necessarily scupper the success of a satirical comedy provided that it is funny. But King of Hearts failed on that level for me too. The humour de Broca aims for is not the sort of knee-slapping yucks one might expect from the premise but rather an unobtrusive, gentle but occasionally pointed variety of comedy that engulfs the viewer like a blanket rather than intermittently tickling them. But for many audience members this blanket will doubtless feel suffocating rather than comforting and the overwhelming amount of inane yammering and ain’t-we-cute frolicking at the expense of any memorable characters or performances becomes unbearably cloying extremely quickly. 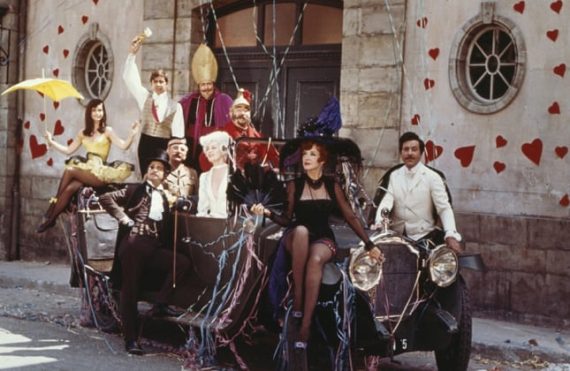 The parallels between the inmates and the caged circus animals which are liberated by the inmates are instantly clear but this comparison also illustrates the circus-like atmosphere that de Broca aims for. In keeping with this carnivalesque approach, the main plot is rendered secondary to the incessant reliance on spectacle. The ticking clock of the bomb that must be found and diffused before midnight could have imposed a much needed sense of urgency on King of Hearts but this is not the kind of film it aims to be and thus this device becomes marginalised, resurfacing occasionally but never with any sense of gravity that makes us believe the film would ever let it go off. The finale that de Broca does serve up is surprisingly barbed but it withers into an epilogue that is more characteristic of the film’s feather-light philosophy.

Ultimately, King of Hearts is a film I’m glad to have finally seen but one which will not stick with me to any degree. While watching, my initial delight at the attractive scenery and the promise of the storyline quickly dissolved into a desire for the endless carnival of nauseating whimsy to draw to a close. While there are many fans of this film for whom I’m glad it has finally found a wide release, I cannot count myself among their number. May they dance in the street in full festive regalia in celebration of its arrival. Sad to say, I will not be joining them.

King of Hearts is released by Eureka on Dual Format DVD and Blu-Ray on 16 July 2018. Special features are as follows:

• Limited Edition O-Card slipcase (first print run only)
• 1080p presentation from the Cohen Media Group 4K restoration (with a progressive encode on the DVD)
• Original LPCM mono audio
• Optional English subtitles
• Feature length audio commentary by film critic Wade Major
• Geneviève Bujold on the making of King of Hearts – An interview with the Academy Award nominated actress from 2017
• Interview with Pierre Lhomme the cinematographer discusses working with Philippe de Broca, and the techniques used for filming King of Hearts
• Interview with Michelle de Broca Producer and ex-wife of director Philippe de Broca talks about working on King of Hearts
• Eureka! trailer for the 2018 UK theatrical release of King of Hearts
• A collector’s booklet featuring a new essay by Philip Kemp