Eureka aren’t releasing The Defiant Ones and No Way Out together in a box set, but I felt they were linked enough through themes of racism as well as both featuring Sidney Poitier in a lead role to justify grouping them together like this in a review. I highly doubt it’s a coincidence that Eureka are releasing them both on the same day either. 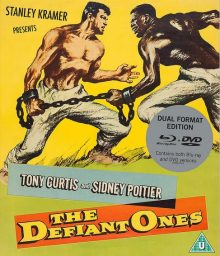 The Defiant Ones opens with a prison transport van crashing one dark, wet night. The only two surviving prisoners, John (Tony Curtis) and Noah (Sidney Poitier), escape still shackled together. Seeing as Noah is an African American and John is a racist white man, the police think the pair “will probably kill each other in the first five miles.” However, a team is assembled to track them down, led by Sheriff Max Muller (Theodore Bikel). As John and Noah stumble through the rough terrain and harsh surroundings on their planned 60 mile trip towards a railway line, they must learn to accept their differences and work together to survive. The odds are stacked against them though as they fall foul of sickness and a mob of racist townsfolk, among other obstacles, with the police and their bloodhounds continuously on their trail.

When I saw Get Out last year, although I was slightly disappointed with it on the whole, I was impressed with how it took the idea of a ‘race-issue film’, moved it from the realm of worthy drama and worked it into a genre movie. Watching The Defiant Ones however, reminded me this has been done before and, in my eyes, more successfully here. Stanley Kramer’s 1958 film makes some tough observations of racism in America, but also packages them into a thrilling action movie. 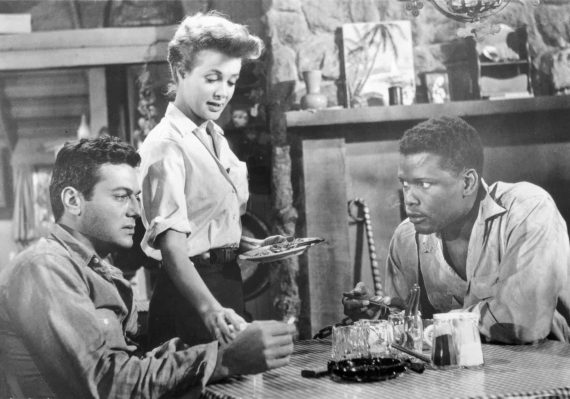 Both sides are superbly handled too. In terms of discussing racial tension, the film is surprisingly raw and to-the-point. Often films of the 50s tiptoe around taboo issues or hide them under metaphor, but here they’re tackled head on with some horrifying treatment of Noah on display. Straight from the offset we hear John call him the ’n-word’ and threaten his life. The pair later have some interesting conversations too and the film delves into John’s troubles which led him to a life of crime and attempt to explain from where some of his racist hatred might have derived. Noah is no saint either. He’s in prison for a reason and the film doesn’t shy away from this, although it clearly points a finger towards racism as the catalyst for his anger. This fairly textured approach means the film doesn’t feel preachy or simplistic, certainly not when you consider the relative lack of other decent films tackling the subject at the time.

The genre thrills of the film are first rate too. There are several nail-bitingly tense sequences which see our two protagonists in various sticky situations. Sticky is an appropriate word as the film is a dirty, rain and mud filled affair. Set pieces include a difficult escape out of a deep hole in a storm, an unplanned ride down some rapids, a night time break in that goes wrong and a gripping attempt to board a speeding train. Most of the time the pair are shackled together too and the most is made out of this impairment whenever possible. 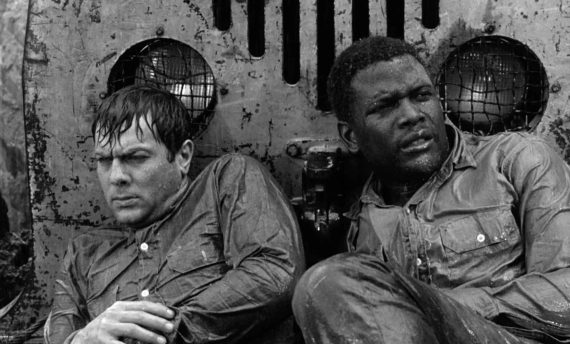 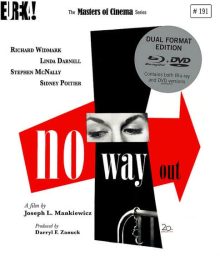 No Way Out sees Poitier play Luther Brooks, a newly qualified doctor who’s assigned to cover in the prison ward on his first night. There he treats two of the notorious Biddle brothers who are brought in after being shot and caught by the police. One of them, Johnny (Dick Paxton), looks considerably worse off than his leg injury suggests and Brooks thinks he may actually have a brain tumour. The doctor decides to take action straight away, but it’s too late and Johnny dies. Ray Biddle (Richard Widmark), a violent racist, blames Brooks for his brother’s death and vows to take revenge once he’s on his feet, not only on Brooks, but on the local black community as a whole. On top of this pressure, Brooks is worried that perhaps he was to blame for the patient’s death, so wants an autopsy to define the cause. This requires consent from Johnny’s closest family though and Ray of course would never allow it. So Brooks and his friend, the senior doctor Dan Wharton (Stephen McNally), meet with Johnny’s ex-wife Edie Johnson (Linda Darnell) to see if she can help. At first she agrees, but her loyalties fluctuate as she swings between the honourable motives of the doctors and the strong-armed, manipulative tactics of Ray, with whom she’d had an affair previously. The deep-seated racism she’d grown up with on the ‘wrong side of the tracks’ affect her actions too.

No Way Out was directed and co-written by Joseph L. Mankiewicz, who wrote and directed the classic All About Eve too in the same year. Mankiewicz was nominated for both best adapted and original screenplay at the following year’s Oscars with the pair of films, winning the former for All About Eve. It’s a shame they came out so close together as I get the feeling Eve overshadowed No Way Out. Film critics and historians often mention the former, but the latter is much less widely known. Although I wouldn’t say it’s quite as strong a film, No Way Out feels more groundbreaking through its tackling of racism at the time. This was 8 years before The Defiant Ones and I struggle to think of anything similar that came out prior to 1950. It’s no less unflinching in its depiction of racism than Kramer’s film either. 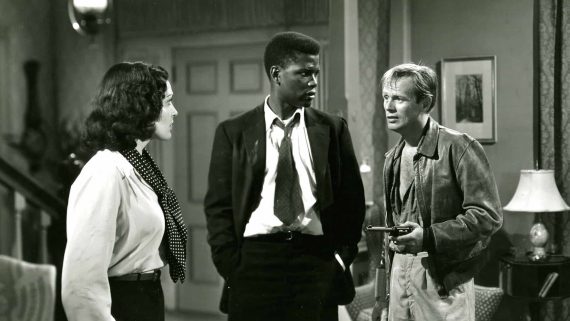 Another noteworthy achievement in No Way Out was its introduction of the great Sidney Poitier to the silver screen. To get such a substantial and trailblazing role in his debut (credited) performance is testament to Poitier’s skill as an actor. He’s excellent here, demonstrating his commanding presence as well as a distinct level of vulnerability. You can see why he would become a household name over the following two decades.

The film isn’t all about Poitier’s character though. It’s an ensemble piece with a slightly unusual structure which subtly shifts the focus between the leads. I’d argue the most important character becomes Edie as the film moves on. She’s certainly the most rounded and intriguingly flawed one and the story often shifts due largely to her choices. Ray and Dan on the other hand are fairly one-dimensional ‘bad guys’ and ‘good guys’. Poitier’s Brooks is somewhere in between. He’s a bit too ‘decent’ perhaps, but there is doubt as to whether he did the right thing with regards to Johnny.

If the characters aren’t always as rich as in The Defiant Ones, it still boasts some great performances. On top of Poitier, who I’ve already mentioned, Darnell does the well written Edie justice and Widmark is at his slimy, horrifying best. Nobody did villains quite like Richard Widmark. Anyone who thinks Heath Ledger’s Joker is the ultimate movie villain needs to watch Widmark in films like this and Kiss of Death, where he plays possibly the most terrifying antagonist of all time. 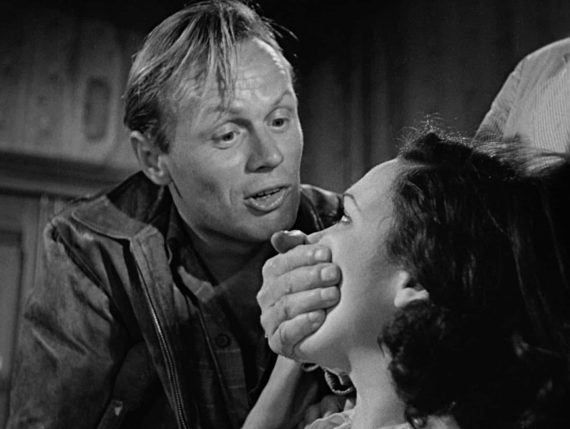 Despite my praise for No Way Out, it does fall slightly short of The Defiant Ones though in comparison. There’s a terrifying sequence where black and white gangs prepare for a face-off, culminating in a stylish, flare-lit silent pause before violence breaks out, but overall No Way Out doesn’t feel as impressively cinematic. Some of the social commentary is a little clunkier here too. In particular, Brooks’ wife Cora (Mildred Joanne Smith) has a couple of overwrought, on-the-nose speeches that don’t settle well. Elsewhere the subject is tackled powerfully though, and, as in The Defiant Ones, the subject of class and poverty comes into play, with the impoverished Beaver Canal area being the home of the racist thugs out to hit the black neighbourhood, which is also of a lower social strata.

So, like the other title reviewed here, No Way Out is a hard-hitting look at the sickness that is racism. Coming close to a decade earlier, it’s perhaps the more groundbreaking film, but it holds up a fraction less successfully. Only a fraction mind you, as this is still a powerful film that is depressingly as relevant as ever, particularly when you compare its story to what caused some of the race riots in America in the 21st Century. As such, both are required viewing and Eureka should be applauded for giving them both fine re-releases. 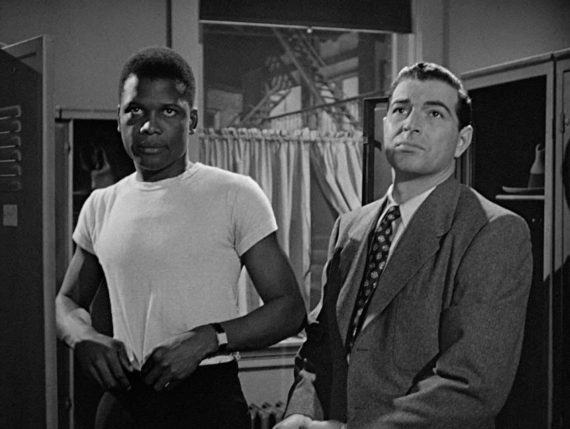 There’s only one special feature of note included with The Defiant Ones and that’s a new video interview with critic & author Kim Newman. This is very good though and covers a lot of ground.

There are plenty of special features included in the No Way Out set. Here’s the list: