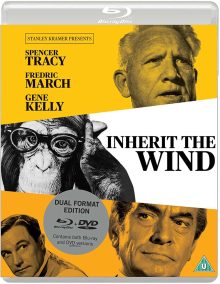 The name Stanley Kramer does not come up that often in latter day discussions of great directors but Kramer was once an extremely important, if never universally lauded, figure in the movie business. As both a producer and director, Kramer favoured liberal-minded message films which attempted to examine controversial subjects from many different angles. Though somewhat trailblazing at the time, Kramer’s work has come to be regarded by many as heavy-handed, preachy and dated, with grandstanding speeches and exaggerated gestures overshadowing realism and emotional complexity. Certainly Kramer’s work is a mixed bag and it hasn’t helped his reputation that his most famous film, 1967’s Guess Who’s Coming to Dinner, is also perhaps his most dated but for the most part when viewed in their proper context Kramer’s films are never less than entertaining and are generally laudable in intention if not always execution.

Standing head and shoulders above the rest of Kramer’s catalogue are two courtroom dramas he made with Spencer Tracey; 1961’s Judgement at Nuremberg, a three-hour reconstruction of the Nuremberg Trials, and the lighter but no less brilliant Inherit the Wind, which took its inspiration from the Scopes Monkey Trial in which a Tennessee teacher was put on trial for teaching human evolution in a state-funded school. Like the play on which it was based, Inherit the Wind takes some liberties with the facts but the intention of neither play nor film was ever to present an accurate reconstruction of the original trial. Rather, Inherit the Wind uses the situation to examine the importance of defending a human being’s right to think for themselves. Misinterpreted by some as an anti-religion treatise, Inherit the Wind is in fact very clear about its themes and, in typical Kramer style, examines them through a series of dialogue-heavy exchanges in which various viewpoints are represented. 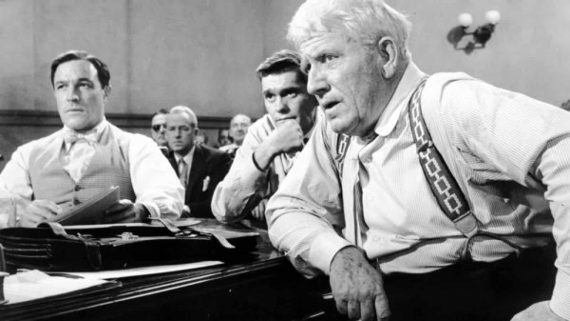 Inherit the Wind begins with the arrest of teacher Bertram Cates in the middle of his class on evolution, leading to his denunciation by a number of leading townsfolk. A ripple of excitement goes through the town when noted statesman Matthew Brady signs up to act as prosecution in the forthcoming trial but this is tempered by the involvement of cynical newspaperman Hornbeck, whose paper has persuaded the controversial and notorious Henry Drummond to represent Cates. Drummond receives a hostile reception from the townspeople but Brady himself steps in to prevent them running him out of town on a rail, stating his intention to beat him in a courtroom setting instead. While the trial gets off to a farcical start with Drummond facing impossible bias from the staunchly religious population, several unorthodox twists in the case see him begin to gain some ground and influence a small number of open-minds.

As Drummond, Spencer Tracey effortlessly walks away with the film in a performance that perfectly envelops the necessary dramatic clout within a charmingly naturalistic casing. Passionate but level-headed, Tracey’s Drummond is an instantly likeable hero whose admirable balance is juxtaposed with the larger-than-life extremes of those around him. As the deliberately Godlike Brady, veteran actor Frederic March is enjoyably excessive in his bellowing indulgence and manages to convince as a man who exudes confidence and certainty but is tipped over into ranting desperation with surprising ease. Song and dance man Gene Kelly, meanwhile, trades his silver-heels for a silver tongue as a smarmy, cynical journalist whose resentment for everyone he perceives as less smart than himself seems to drive his quest for victory at least as much as any sense of justice. Alongside this solid trio of central turns, a couple of famous sitcom stalwarts provide strong support. Dick York of Bewitched fame is convincingly edgy as the defendant while MASH’s Harry Morgan is subtly superb as a judge torn between his personal bias and professional duty. 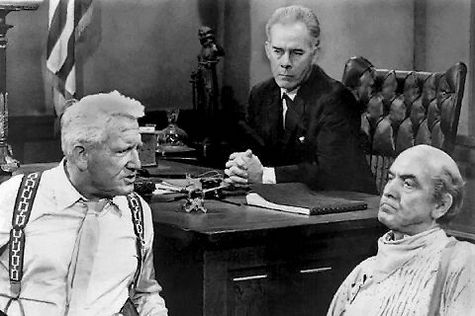 Inherit the Wind’s biggest asset is its eloquent, ironic and poetic script by Nedrick Young and Harold Jacob Smith who had previously written the Oscar-winning screenplay for Kramer’s excellent The Defiant Ones. Young had been blacklisted and his involvement in the film helped highlight its thematic connection to the evils of McCarthyism, an oft-prodded bugbear of Kramer’s. The script features numerous examples of the townspeople’s obvious hypocrisy such as the flagrant idolatry they direct at Brady but it is also careful to delineate the light and shade of its characters. Brady’s previous career is acknowledged to have included vehement support of women’s suffrage and in one pivotal scene he is shown to take a stand against a cruelly single-minded clergyman in full flow. Kelly’s Hornbeck, meanwhile, is depicted as intelligent but insufferably condescending, his barrage of witticisms gradually weighing heavier on the shoulders of the tolerant Drummond. A couple of later scenes in the film could easily have toppled over into tiresome moralising but instead they skilfully allow characters to voice opinions without prodding us towards complete agreement or disagreement. In a film concerned with the freedom to think for oneself, this is an essential quality with which a less finely crafted screenplay might have struggled. Instead, Inherit the Wind earns its quietly philosophical final image which seems to acknowledge the importance of diametrically opposed ideas as good philosophical fuel, provided they are afforded the right to be considered in the first place.

Inherit the Wind is released by Eureka on dual-format Blu-ray and DVD on 21 May 2018. First pressings include a limited edition collectors booklet and all additions feature a new video interview with film scholar Neil Sinyard and the original theatrical trailer.