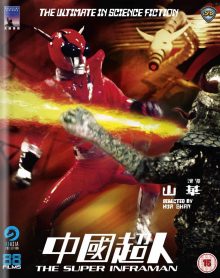 The Shaw Brothers Studio in Hong Kong was famous for its period martial arts movies, but they weren’t averse to throwing their hats into other rings, particularly when there were new trends to exploit. In the mid-seventies the studio decided to cash in on the success of Japanese kaiju and superhero movies. The Godzilla franchise had been running for a while by then and was fizzling out, but audiences still enjoyed seeing giant monsters laying into each other. The TV series Ultraman was a huge success in the mid-60s too and the Shaw Brothers decided they could combine the two genres in their own distinctive style with The Super Inframan (a.k.a. Infra-Man or Zhong guo chao ren). It was a big success back in its day, but never spawned a sequel or series like some of the more popular kaiju or superhero movies, so has become largely forgotten since. Thank God then for 88 Films, who have added it to their ever-expanding 88 Asia collection.

The Super Inframan sees China devastated by an earthquake caused by some sort of monster. Soon accepting responsibility for this attack is the Demon Princess Elizebub (Terry Liu), who claims this was a mere taste of what she’s capable of. She orders Earth’s population to bow down to her rule or she will wipe out the entire planet. Standing up against this menace, Professor Liu Ying-Te (Hsieh Wang) launches his BDX Plan to try to stop her. This involves using experimental surgery to turn one of his loyal employees, Rayma (Hong Kong legend Danny Lee), into an all powerful superhero called Inframan. He has countless special abilities, super strength and a garish red costume. He’s also Earth’s last hope against the evil princess and her entourage of crazy monsters.

I had a whole shedload of fun with this. I must admit, my kaiju knowledge is pretty slim – I’ve only seen a couple of of the Japanese Godzilla movies and the first Gamera outing. I’m not a huge superhero fan either, but if more of them were as wacky and mindlessly enjoyable as this I’d watch a hell of a lot more.

You need to come into the film in the right frame of mind though. Like most kaiju of that pre-CGI era, the costumes are pretty naff. Don’t expect any hint of realism here, just suspend all disbelief and accept the hilariously bonkers costumes for what they are. The boldly colourful, campy production design and anything goes attitude of the film is all part of its charm. Don’t expect the plot to make a whole lot of sense either, it’s basically just a string of action sequences and is all the better for it.

Speaking of action, Shaw Brothers put their own mark on the world of monsters and super-humans by adding a healthy dose of martial arts mayhem into the mix. Due to the unwieldy costumes, the choreography isn’t quite as intricate or graceful as some of the better Shaw Brothers kung-fu classics, but the actors and stunt performers do their best to deliver plenty of high flying action throughout the film. Shaw Brothers regulars Lee and Liu put their all into their lead roles too and their enthusiasm overpowers any complaints about hamminess. 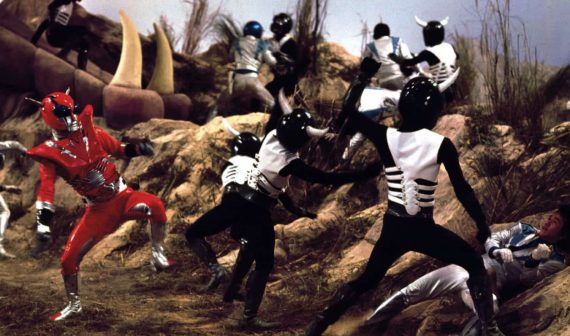 The Super Inframan is unbelievably camp and very much of its time, but if you can accept this, you’re in for a hugely enjoyable, breathlessly paced kung-fu spin on the super hero and kaiju genres. If only our current Marvel and DC blockbusters were this much fun!

The Super Inframan is out on 23rd April on Blu-Ray in the UK, released by 88 Films (or it’s shipping now from the 88 Films online store if you want it earlier). It looks and sounds incredible. The picture is wonderfully clean and sharp but still natural-looking. Both the original Chinese audio and English dub are available, so all bases are covered. I opted for the former and unfortunately the subtitles have a few grammatical errors and odd wordings here and there. They’re not bad though and never detracted from the pleasure of watching the film. They even added to the fun once or twice.

There aren’t any featurettes or commentaries on the disc, but the limited edition slipcase features booklet notes from Calum Waddell which are a pleasure to read and offer some insight into the film’s background and original reception.