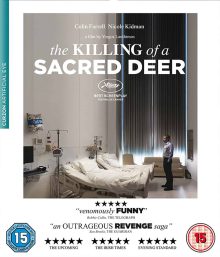 Greek writer/director Yorgos Lanthimos burst on to the world cinema scene in 2009 with Dogtooth. It wasn’t his debut film, but it was the one that first captured the attention of critics and arthouse audiences, and for good reason. It’s not an easy watch and won’t appeal to everyone, but I found it clever, fascinating, dark and strikingly fresh. A second viewing made me love it even more. I haven’t seen his follow-up Alps yet, but I liked his subsequent film The Lobster a lot. It’s incredibly ambitious and as such doesn’t always hit the mark, particularly in the overly drawn out third act. However, it’s so unusual and brimming with ideas I once again fell for its unique charms and his next film couldn’t come quickly enough. Now it, The Killing of a Sacred Deer, is here, hitting the home entertainment market after a small cinematic run, I prepared myself for another trip into Lanthimos and his regular writer Efthymis Filippou’s warped minds.

The Killing of a Sacred Deer takes the Greek tragedy of Iphigenia as a loose base for its twisted tale which sees Steven (Colin Farrell), a successful surgeon, befriend a strange teenager named Martin (Barry Keoghan). The boy’s father died on Steven’s operating table so he felt sorry for him and agreed to spend some time with him. Martin grows increasingly obsessed with Steven and his family though, so Steven tries to distance himself from the boy. It’s at this point however that Martin announces that Steven must face a disturbing ultimatum. Both of Steven’s children (Raffey Cassidy and Sunny Suljic) and his wife (Nicole Kidman) will fall ill and die in a matter of days, one by one, unless he kills one of them himself. So, for the latter half of the film, Steven must either find a way to stop this ‘curse’ or choose the family member he would miss the least.

As the synopsis suggests, this is a dark film. In fact, I’d say it’s the most disturbing of all of Lanthimos’ films that I’ve seen and Dogtooth and The Lobster are hardly light romps. The concept in general makes for tough viewing, particularly when you know the director isn’t going to take an easy way out by the end. Making it rise to nigh on terrifying is a near horror-movie style. I don’t mean the cheap, jump scare tactics of low-rent horror, but the cold, deliberately paced style of The Shining. It has a similar atonal score too that sends a chill down your spine. The finale in particular is horrific and I found it very difficult to sit through. 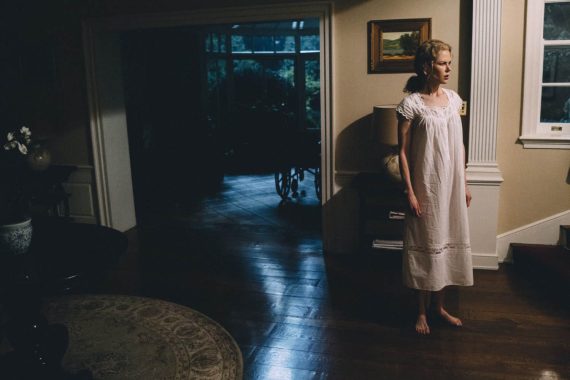 That said, like in Lanthimos’ other films, there’s a very dark, yet nonetheless clear, sense of humour running throughout. On top of some bizarre dialogue that mines laughs from the inane, similar to some of the lines in his other work, the film makes some sharp observations about the modern family unit. This is one of the key themes that stuck with me in fact. There are various readings that can be taken from the film’s content, but I was particularly interested in how it took a cynical view that although a family can seem ‘perfect’ (as Steven’s does early on in the film) and deeply connected through an unflappable love, each member is ultimately a unique human being with a will to survive. This is shown through the ways each member reacts to the ultimatum and tries to sway Steven’s final decision.

Although the greater ‘meaning’ of the film isn’t clear (which to me is a positive as it leads to deeper discussion), on the surface the film is starker and simpler than Dogtooth and The Lobster and as such seems more successfully focused and in some ways his strongest film. The performances are finely honed here too. Whereas The Lobster had a couple of weak links in its large cast, this smaller unit performs superbly. Keoghan, a new young face, is particularly strong as the deeply disturbed Martin. Like in his other films, Lanthimos employs an unusually stilted and deadpan style among his actors, which can be off-putting at first to the uninitiated, but once you accept it, you can realise how good a job the actors are doing with the approach.

It’s hard to fault on a technical level. On top of the aspects I’ve mentioned, the film is beautifully shot, with some striking compositions and use of movement that reminded me of Kubrick. However, it’s such an uncomfortable watch it’s hard to wholeheartedly recommend. It’s less inventive and playful than Lanthimos’ other films perhaps too. If ‘difficult’ cinema is your thing though, you owe it to yourself to check out this pitch black marvel.

The Killing of a Sacred Deer is out on Blu-Ray and DVD on 5th March in the UK, released by Curzon Artificial Eye. I saw the Blu-Ray version and the film looks and sounds pristine.

There are a couple of special features included. These are as follows:

– Making Of - BAFTA Q&A with David Heyman, Paul King, Simon Farnaby, Hugh Grant and Pablo Grillo
The Q&A is great, with some intelligent discussion on the film’s background, style and production. It digs deep into Lanthimos’ unusual approach in particular, which makes for fascinating viewing. The Making Of is a bit more lightweight in comparison, but still worth a look.