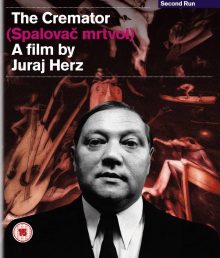 My newfound, slow-building love of classic Czech cinema has been documented here through several reviews I’ve written over the last couple of years and as I’ve watched and listened to the various interviews, essays and commentaries included with discs I’ve covered, a title that’s been mentioned a few times is Juraj Herz’s The Cremator. It was released on DVD by Second Run (who are the UK’s chief distributors of classic Czech cinema) over a decade ago, so I’ve been keen to pick it up, but I resisted, hoping the company would upgrade it to Blu-Ray. Lo and behold, Second Run granted my wish and have now put it out on the format, so I quickly snapped up the chance to review the disc.

The Cremator (a.k.a. Spalovac mrtvol) is set during the Nazi occupation of Czechoslovakia in the early days of World War II. Karl Kopfrkingl (Rudolf Hrusínský) is a cremator working at the time, who believes he is cleansing souls through his job, ridding them of the fear of death in a humane way. He also has high ambitions for himself and longs for success, feeling inadequate for his wage not bringing in as much money as his wife’s dowry. When an old friend approaches him who sides with the Nazis and describes them as ambitious pure citizens in line with Kopfrkingl’s views of the world, the cremator decides to assist. This causes his already rather delusional mind to reach breaking point, leading to a shocking series of events in the final act.

Well, my love of Czech cinema isn’t going away any time soon, as this was another title that blew me away. Like most of the other Czech films I’ve seen and reviewed here, it’s hard to classify and most unusual, perhaps even more so than the others. It’s often described as a comedy, but the humour is as dark as you get and certainly isn’t laugh out loud funny. It’s lurking beneath the surface and is so pitch black you almost feel ashamed to have spotted it. 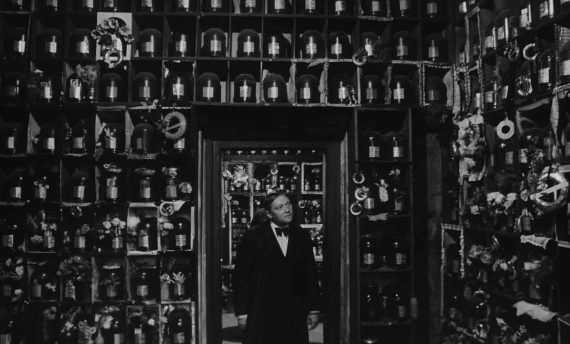 It’s very surreal too, with few characters speaking or acting like real people. This, added to a strange, offbeat editing style, frequent use of fish-eye lenses and abstract framing, make for a dreamlike quality that quickly becomes a nightmare as the film gets ever more disturbing. By the end it feels like a full on horror film, not only due to some grim acts that take place, but due to the surreal aspects being amped up. Kopfrkingl even starts speaking to a vision of himself dressed like a Buddhist monk (Kopfrkingl is obsessed with Buddhism and reincarnation). Like some of David Lynch’s best work (and I’m sure he’s a fan of The Cremator or should be), the film is deeply disturbing through its disorientating nature and uncomfortably off-centre presentation. The Nazi elements that build throughout the film aid this dark edge too of course.

Speaking of which, the film is of course deeply political. Herz takes aim at several targets, particularly the dangers of fascism, as he presents a character easily swayed by Nazi propaganda whilst also proving fairly deft at sweet talking those around him into following his own ways. Kopfrkingl is, or at least becomes, a truly evil character, but he always acts with a sickly smile and believes he is doing good, so easily affects his friends and family with his rambling views. Indeed, Kopfrkingl rarely stops talking and keeps most other characters from chipping in. He always has an opinion on something or feels the need to remind everyone of his beliefs or wholesome, abstinent behaviour (even though he frequents a brothel in private). This near-endless stream of consciousness, dished out in Hrusínský’s creepy monotone voice, adds to the nightmarish quality of the film. It could have become annoying in the wrong hands, but Hrusínský does a fine job as the lead character. As one of the special feature contributors points out, he has a sort of Peter Lorre quality to him and is equally as great an actor.

It’s a deeply disturbing film overall, strikingly bold in execution with a nightmarishly surreal style. The subject matter is tough, but the dreamlike presentation draws you in as the pitch black humour gives way to flat out horror by the end. It won’t be a film for everyone, but anyone with a taste for unusual horror films or particularly the work of David Lynch should track it down as soon as possible. 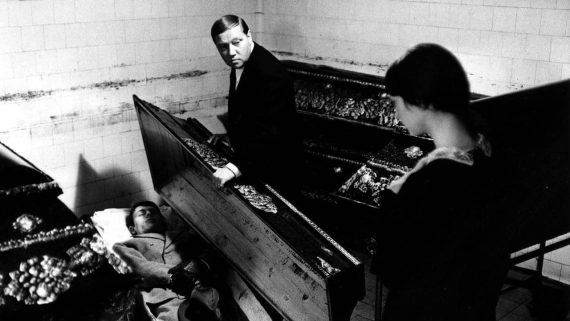 The Cremator is out now on Blu-Ray in the UK, released by Second Run (their older DVD version is still available). The transfer looks excellent with no noticeable damage or issues and a robust soundtrack backing it up.

Second Run have included several special features too. These are as follows:

It’s a fine selection of extras that help you better appreciate this unusual film. The commentaries (I include the podcast here as it’s played over the film) are particularly illuminating and led by critics who are passionate about the film.