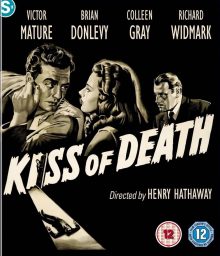 I hit another of Signal One’s film noir re-releases this week with Henry Hathaway’s Kiss of Death. Hathaway is a director with quite a few classic titles to his name (True Grit, How the West Was Won, Niagara), but he’s hardly a household name. Looking through his filmography, his work is largely in typically ‘macho’ genres like westerns, war movies and film noirs. Kiss of Death falls into the latter category and came close to the end of a string of noirs he’d directed, including acclaimed titles like 13 Rue Madeleine, The Dark Corner and Call Northside 777.

Kiss of Death sees Victor Mature play Nick Bianco, a criminal that goes to prison after a jewellery store heist goes sour. He gets an offer from Assistant D.A. Louis D’Angelo (Brian Donlevy) to avoid jail time if he squeals on his accomplices that got away, but turns it down. When he finds out his wife has committed suicide after cheating on him with one of those accomplices, leaving his two young daughters in an orphanage, he has second thoughts about the offer though. D’Angelo talks Bianco into an elaborate ploy to put the psychopathic killer Tommy Udo (Richard Widmark) in jail, which he accepts, getting him put on early parole and back with his kids and new wife Nettie (Coleen Gray). Unfortunately things don’t go quite to plan though and Bianco and his family’s lives are put in danger. 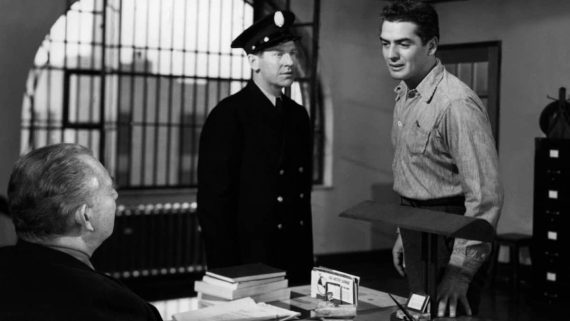 During some of the early stages of Kiss of Death I was a little worried. I love a good film noir, and two of the things that sell the genre to me are its tough edge and moody, stylised visuals. This, however, opened with a light voiceover explaining how Bianco was only a criminal due to circumstance and was a loving father to two young girls. It’s shot with a bit more of a documentary look too, using locations rather than sets throughout according to an opening statement (although the commentary states this isn’t true as one of the final scenes was reshot on a sound stage). So I thought this wouldn’t be the sort of dark, vicious, sumptuously shot noir I love.

I needn’t have worried though as Kiss of Death delivered the goods eventually. It is rather sentimental when compared to most of its noir counterparts, but scenes regarding Bianco’s family are very well handled for the most part. The moment he finds out his wife has killed herself whilst he’s in prison is particularly powerful, using little dialogue, only the thrum of machinery and some fairly understated acting by Mature. He does an excellent job with a fairly complex role for the time, although the most attention-grabbing performance here is that of Richard Widmark. His Tommy Udo is one of the most terrifyingly psychopathic villains ever put to film. He plays it big and some might say over the top, but in my mind it’s perfect in giving his character an unhinged menace. I’d say this film is worth watching for him alone, he’s that good in it, and it was his debut film!

There are more reasons to enjoy Kiss of Death though. The story is well told and the authentic locations provide credibility to the film. More stylised lighting comes into play too as the film gets darker in its final third. There are also some brilliantly tense sequences dotted throughout the film. The opening heist for instance contains a nail-biting climax when the thieves quietly take a long elevator ride to the ground floor, stopping too regularly for comfort along the way. The film’s finale is particularly thrilling too. 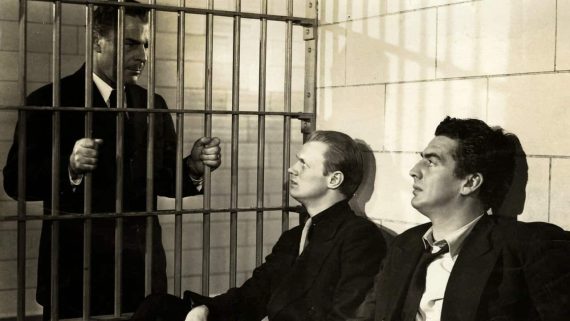 As a couple of my examples mentioned, the film makes great use of sound, or lack thereof. Many of the film’s most tense sequences are silently or quietly played out, creating a great sense of unease. Hathaway doesn’t spoil things with over the top music cues, although there are a couple of big moments here and there.

So, although it may be light on style and hard-boiled dialogue, Kiss of Death has a gripping story, some emotional weight, tension you can cut with a knife, and one of the slimiest, most sadistic villains ever put on screen. As such, it classes as top tier noir in my books, despite my initial reservations.

Kiss of Death is out now on Blu-Ray & DVD in the UK, released by Signal One Entertainment. I watched the Blu-Ray version and the transfer is great, with plenty of detail and no visible damage.

Both the interview and commentary are highly recommended. Widmark is very witty and full of enjoyable anecdotes in his interview and Ursini and Silver provide a well researched dig into the film’s production history.