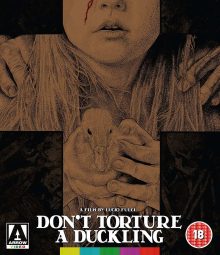 The Italian genre movie writer/director Lucio Fulci is probably best known for his ultra-gory horror movies, such as Zombie Flesh Eaters (a.k.a. Zombie), The Beyond and City of the Living Dead, so he’s often considered a rather trashy director by more mainstream critics. However, he actually wrote and directed a range of material over his long and prolific career (largely earlier on in it), including a number of comedies. His most well respected films touch on the horror genre, but fall more accurately into that of the giallo (Italian murder mystery thrillers, basically). The most acclaimed of these, and the one Fulci named as his personal favourite, is 1972’s Don’t Torture a Duckling, which Arrow Video have brought out on Blu-Ray in the UK.

Don’t Torture a Duckling is set in the rural Italian town of Accendura (which is fictional as far as I know) where young boys are being killed off one by one. After the first murder, a local ‘simpleton’ known as Barra (Vito Passeri) is arrested and thought to be the killer after he is caught trying to ask for a ransom from the boy’s parents, pretending he is alive and hiding the body. The police aren’t too sure he’s the right man though, despite this evidence, and after the second child is killed they know for certain they’re barking up the wrong tree. From then on a couple of oddball characters are suspected, including a local ‘witch’, Maciara (Florinda Bolkan), and a young attractive woman, Patrizia (Barbara Bouchet), who is believed to have moved here to recover from a drug problem. Whilst the police struggle to find the culprit, a journalist from the city, Andrea Martelli (Tomas Milian), makes his own investigation. As each new suspect is made public, the locals react in vicious outrage before the truth eventually comes out.

I’ve not seen a lot of Fulci’s films, but I’ve liked most of them quite a lot (other than Zombie Flesh Eaters, which had its moments but dragged). This is a clear favourite though. It’s certainly great evidence that the director was more than just a purveyor of gore. It’s a rock solid thriller with few lulls and no drawn out tangents other than the obligatory red herrings thrown out to keep you guessing as to who the killer is.

I must say I guessed the culprit very early on, but only due to knowing what kind of person it usually is in a film like this. Knowing (or at least strongly predicting) the killer didn’t detract from watching the film though. Too much fuss is made of ‘spoilers’ these days, but more importantly, what separates Don’t Torture a Duckling from many other giallo, is that it’s doing a lot more than just unravelling a mystery.

The film is really about the treatment of outsiders. The innocent suspects of the film are all outcasts from the village, either through mental illness, trauma, unusual beliefs/practises or simply from being from out-of-town, and are treated horrifically by the angry mob, stirred up by the death of their town’s children. The central set-piece of the film, when Fulci’s eye for horrifically graphic murder comes to the fore, is not the killing of a child by the chief villain, but the brutal beating to death of Maciara by the fathers of the dead children. It’s a truly shocking scene, despite the dated make-up effects, due to Fulci’s direction, some fine editing and a striking use of pop music on the soundtrack. The latter brought to mind the infamous ear-slicing scene in Reservoir Dogs and I wouldn’t be surprised if Quentin Tarantino learnt a few tricks from Fulci.

The director is clearly damning the attitudes of those who shelter themselves in tradition and old-fashioned values, mistrusting or downright hating anyone who doesn’t fit their mould. The motives of the killer reflect this too although I won’t discuss this in too much detail for obvious reasons.

This social commentary gives the film added weight that many similar films don’t have. It’s a grim watch as you might expect from the subject matter, but Fulci crafts a film that’s gripping and remarkably controlled when you consider he’s famous for gore-drenched zombie films. Yes there are a few dated effects here and there and the central mystery isn’t difficult to solve, but it’s a fine piece of work and I might go as far to say it’s one of, if not the best giallo I’ve ever seen.

Don’t Torture a Duckling is out now on Blu-Ray in the UK, released by Arrow Video. The picture quality is a little soft, but this is likely a source material issue as it’s a clean and sturdy print otherwise. Audio is solid too (I watched the Italian language version in case anyone’s interested).

It’s a huge amount of extra material and all of it is worthwhile, so it’s an impressive disc, even by Arrow’s high standards. The commentary is excellent, providing a vast amount of information on the cast and crew, as well as some analysis on the film itself. Ellinger’s essay provides a thoughtful alternative view of Fulci’s work and Koven’s piece also takes an interesting and fairly academic view of it. The Fulci audio interview covers most of his career and is brutally honest, so well worth a listen. Being an editor myself, I enjoyed listening to Micheli’s interview too and the rest of the cast and crew interviews are also worth a look.

A highly recommended package then, in all aspects.