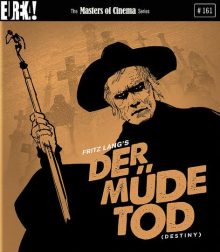 I’ve been slowly working my way through Fritz Lang’s filmography and I’ve yet to be disappointed by his work. He crafted some of cinema’s most thrilling, inventive and forward thinking films during his 41 years behind the camera in both Germany and the US (where he moved in the mid-30s due to his anti-Nazi beliefs). So when Eureka announced they were releasing one of the director’s early successes, Der müde Tod (translated as The Weary Death, but otherwise known as Destiny), as part of their Masters of Cinema collection, I was keen to see how it stood up against his later, more famous films.

Der müde Tod sees Death (Bernhard Goetzke) come to make his home in a small German town. As well as building a great wall with no windows or doors around his property by the graveyard, he seems to follow a young couple (Lil Dagover and Walter Janssen) who are engaged to be married. As you might suspect, he’s there to collect a soul and the young man soon disappears. The woman, distraught, seeks out Death and pleads with him to spare her fiancée. Weary of his tough job, the shadowy figure offers the woman a deal. If she can prevent the deaths of just one of three nearly spent lives he presents to her (all part of tragic romances), she can have her wish.

In dealing with three separate stories, on top of the main framing narrative, Der müde Tod works like D.W. Griffith’s Intolerance, made a few years prior, telling a few similarly themed tales to make a universal message (this time about fate). Here they’re not intercut though, the ‘extra’ stories merely play out back to back in the middle of the film. 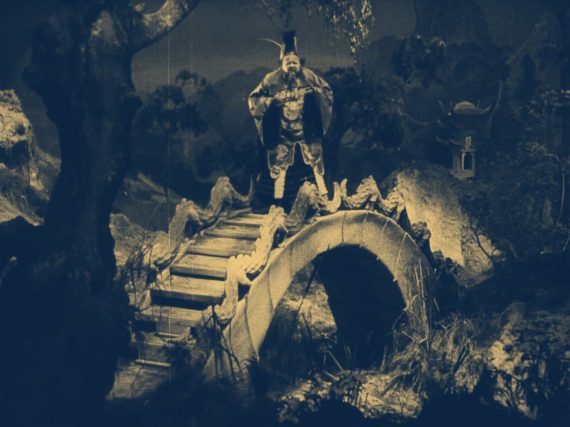 The three doomed affairs here are very similar in terms of core themes and basic narrative, which makes for a slight-feeling overall story, but these short films within the film are presented in drastically different settings (the Middle East, Venice and China) and with the trappings of a variety of genres. Throughout the film, you get melodrama, action/adventure, fantasy, horror and even a little comedy in the third segment. This sounds like a mess, but Lang blends the mix perfectly and instead the fusion makes for a surprisingly enjoyable romp, despite the potentially grim subject matter.

It did take me about 20 mins to get into it though. This can often be the case with silent films, as I adjust to the style, but it wasn’t until the fiancee dies that the film got exciting and as the three stories went on I was more engaged and gripped by the end, particularly through the dramatic final act. It’s fairly predictable perhaps, but works as rousing entertainment and in forging a satisfying conclusion.

As you’d expect from Lang, the film is visually impressive. Early on there’s a shot of Death’s wall which is enormous, demonstrated by having the character himself tiny against it at the bottom of the frame. I loved the candle room too, where each flame represents a life which will eventually be extinguished. I imagine that wasn’t a new idea back then, but it works very well in a visual sense here. I also loved the parade of ghosts heading through the wall to meet death. Lavish period settings are also well utilised through the film’s wonderful production design. There are some decent early special effects too, although a couple don’t stand up so well. Many ideas in the third story in particular were re-done more successfully in The Thief of Bagdad (although that was made 3 years later). 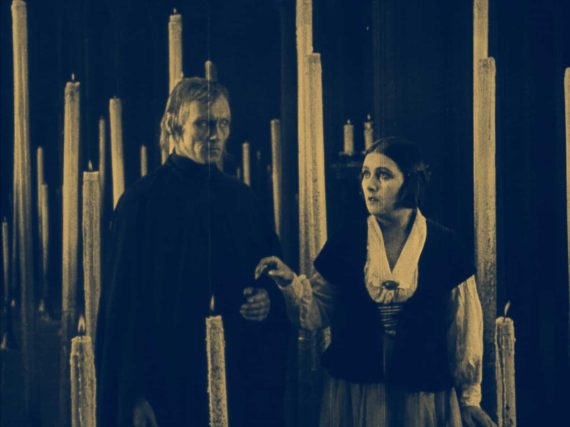 As can often be the case with old films such as these, there is some dated treatment of different cultures that threatens to offend. The Chinese characters in the third story are a bit too comically portrayed, particularly the wizard who seems like an crazy, beard-stroking stereotype. The depiction of Muslims in the first story as wild, blinkered and blood thirsty isn’t far off what some third rate, right-wing media outlets peddle these days though, so maybe we’ve not moved on as far as we’d have liked in almost 100 years.

Taken as a whole though, Der müde Tod is an enjoyable if fairly slight mash-up of styles and genres. It took me a short while to fully engage with it, but ultimately I had fun with the film and Lang once again shows he’s a master of crafting memorable visuals that were ahead of their time, even if some aspects have fallen behind.

Der müde Tod is out now on Dual Format DVD & Blu-Ray in the UK, released by Eureka as part of their Masters of Cinema series. The picture has some scratches and flickers, but overall it’s a decent, detailed image, particularly considering the film’s age. The score comes through nicely too.

There are a couple of special features included. These are:

The commentary and essay are both decent and help you appreciate the influence the film had as well as fill you in on details about Lang, his life and his work. The booklet is excellent as always.