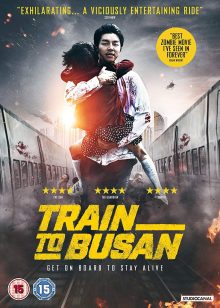 I’ve been enjoying a glut of East Asian genre movies of late with Creepy and The Wailing both impressing me. I hoped to continue this winning run with the South Korean zombie film Train to Busan, which has been gathering a lot of acclaim from critics and horror fans alike. I’m a bit tired of zombie movies these days to be honest, but I have faith in the Koreans to inject a bit of fresh blood into the genre and from what I’d heard, Train to Busan had done just that.

The film sees a zombie outbreak tear through South Korea after a leak at a biotech site. We don’t witness the beginnings though, instead we follow the hard-working hedge fund manager Seok Woo (Yoo Gong) as he takes his young daughter Soo-an (Soo-an Kim) on the train to Busan to see her mother. The two parents have separated and Seok is struggling to spend enough time with Soo-an, so she wants to go live with her mother. Circumstances around the pair cause Seok to have to step up as a father though when the undead start attacking in hordes and the two are trapped on the train along with a few other survivors and the hungry remnants of the less lucky passengers.

I’m not sure it quite lived up to all the hype, but I did enjoy Train to Busan quite a lot. Pitching closer towards action than horror to some extent, the film played more towards my tastes in that aspect. Instead of jump scares and a reliance on gore (this is bloody, but not gross-out) we get pulse-racing chases as waves of zombies launch at our protagonists. This style of fast paced zombies attacking in great numbers is reminiscent of World War Z, but the scale is kept just about small enough and less CGI-heavy to seem more realistically threatening. 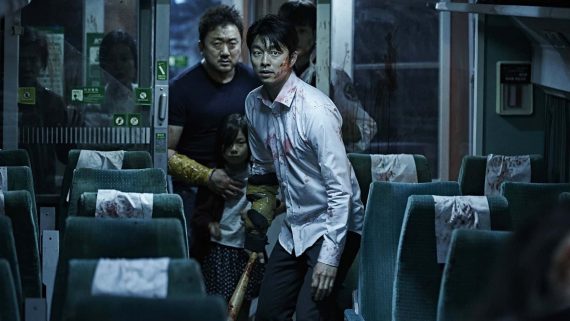 Due to the similarity to World War Z, it’s not quite the totally original spin on the zombie genre I was hoping for, but it still felt fairly fresh due to the setting and focus on action over scares. The film also has fun playing with its own ‘rules’. The zombies here are particularly dumb and have poor eyesight, so if they can’t see their victims, they soon cool off and don’t know what to do with themselves. So, the protagonists make the most of tunnels and cover glass doors with newspaper or extinguisher foam to protect themselves. The film does contain a few of the usual zombie movie cliches though, like characters sacrificing themselves for the greater good after a bite. This happens quite a lot here actually, in keeping with the theme of doing unto others.

Like the best zombie movies, Train to Busan makes sure to add some social commentary to the pot, so as to avoid being mere mindless trash. Writer/director Sang-ho Yeon has a lot to say about class with more privileged passengers cutting themselves off from their ‘less desirable’ fellow survivors, much to their detriment of course. A man who looks homeless is ignored by most too, even though he was the only one warning people what was to come and acts selflessly when the proverbial hits the fan. Seok is constantly telling his daughter to look after herself rather than others in the early scenes too, but he learns otherwise as the film moves on. 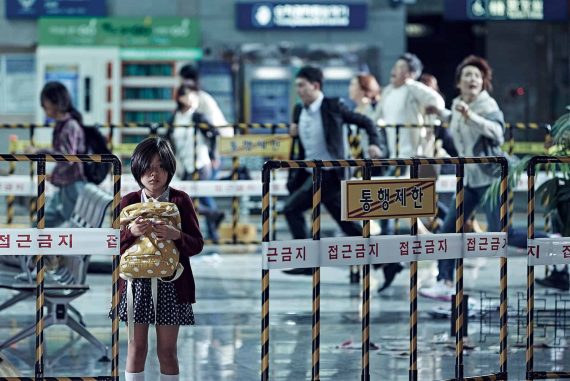 This adding of depth to the film is appreciated, but I did feel it was laid on rather thick here. So many scenes and lines allude to the core message that it gets tiresome rather quickly and it causes some scenes to feel a bit clunky. The drama can get a little cheesy too, although the central father-daughter relationship is well handled, aided by believable chemistry between the two and a decent child performance from Soo-an Kim. The denouement is particularly touching.

So, although it can be quite blunt in its writing and contains the odd cliché here and there, it remains an effective take on a tired genre. It’s a thrilling ride, that’s for sure, with an intense pace and some very exciting set-pieces. It may not be as classy as Creepy or The Wailing, but it’s a lot more fun.

Train to Busan is out on 27th February on Blu-Ray, DVD, download and VOD in the UK, released by Studiocanal. I saw the Blu-Ray version, which looks and sounds fantastic – crisp, colourful and clear.

There are a small handful of special features too. These include:

These aren’t much to shout about unfortunately, although I quite enjoyed the making of. It’s very rough and ready, largely made up of raw behind the scenes footage and a couple of brief off-the-cuff interviews, but it’s nice to see the shoot without the distraction of over-cutting or backslapping talking heads.